Clarence A. Ostwald started working at age 11 delivering newspapers. It was the beginning of a work life that lasted 84 years without interruption.

After holding a series of jobs as a young man, Mr. Ostwald enlisted in the U.S. Army Air Force, then operated the Conn-Clare Luncheonette and Soda Bar on Beach Road in Cheektowaga for 27 years, then worked for another 38 years at Irish Propane.

Mr. Ostwald, 97, died Sept. 22, 2018 in his home in Cheektowaga of the effects of long-term chronic obstructive pulmonary disease. He was cared for by his family with help from Hospice Buffalo.

He was born in Cheektowaga, the second child of William Otswald, a horse stable worker, and Mayme Keller Ostwald, a waitress. He was the brother of William, Elmer and Janice.

Mr. Ostwald attended Cheektowaga schools and graduated from Pine Hill High School in 1938. He progressed from newspaper delivery to other jobs — at a paint factory, delivering milk and scooping ice cream, among others.

In his spare time, he loved to socialize, and in his youth he played accordion and washtub bass at family and neighborhood parties.

From December of 1942 to February of 1946, he served in the Army Air Forces. He was trained in Boston and graduated from the Aviation Institute of Technology in New York, then worked as an airplane supercharger repairman in England. He received the European-African-Middle Eastern Serve Medal, Good Conduct Medal and World War II Victory Medal.

"He was very proud of being in the service, but he never wanted to take all the praise on Veterans Day," Powell said. "He would say, 'I wasn't up there on the front lines, where other guys were living in foxholes and in water. He'd say, 'You don't need to praise me.'"

On June 22, 1946, Mr. Ostwald married Connie Czapla in Lancaster. They had two daughters and a son, Jo Ann, Nancy and Robert.

In 1951, the couple opened Conn-Clare Luncheonette and Soda Bar next to his family's convenience store, Ostwald's Market, at Beach Road and Huth Road in Cheektowaga. The family lived one door away on Beach Road, said Nancy Powell. 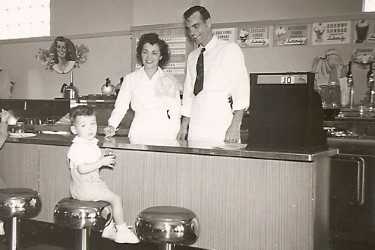 Connie and Clarence Ostwald stand in their Conn-Clare Luncheonette and Soda Bar  in Cheektowaga, as their oldest child, Robert, sits at the counter.

The eatery became a popular spot with everyone from state troopers, clergymen, doctors and local politicians to  construction workers and contractors working in the area during the construction boom in post-war Cheektowaga. They were drawn by the coffee, which cost 10 cents except when it was "given away for free, generously portioned ice cream sundaes and one of the most famous area fish fries," said his family. But the proprietor's personality, wit and warm welcome made them steady customers, Nancy Powell said.

"The coffee shop he ran with my mom was like a neighborhood institution. People came from all around to eat there basically to enjoy his wit," said Powell. "He was amazing." Mr. Ostwald enjoyed telling jokes and occasionally playing good-spirited practical jokes, she said.

Shortly before Conn-Clare closed its doors in late 1978, Mr. Ostwald began work at Irish Propane as the Manager of Cylinder Re-qualification, a specialist position that he held until he retired on the day before his 95th birthday. "He was called 'Dad' by the other employees at Irish, an indicator of the love and respect he garnered in his tenure there," his family said.

Mr. Ostwald was a Model A enthusiast who owned two and restored one. He enjoyed landscaping and home maintenance, as well as "constant tinkering with motors," his family said, so his lawn mower repair skills were in great demand. He enjoyed relaxing by the radio with a crossword puzzle, and, until his mid-70s, hunted deer, pheasant, partridge and turkey.

In addition to his daughter Nancy Powell, Mr. Ostwald is survived by another daughter Jo Ann Matthews; a son, Robert Ostwald; seven grandchildren; and seven great-grandchildren.