The nameplate is still there, hanging to the left of the one belonging to the player who occupies the dressing cubicle below.

It's as official-looking as all of the others, complete with a Bills logo and name in blue capital letters: "AGAHIU." That's for Drew Agahiu, an 11-year-old student at Frederick Law Olmsted School and a source of inspiration for the owner of the neighboring nameplate: "WHITE."

They met in early August, when the Bills made Agahiu, who is battling sickle cell disease, an honorary captain for their practice at New Era Field. White isn't just Agahiu's favorite player. He's someone Agahiu wants to emulate, which was why the Bills began the practice by having the youngster return a turnover 20 yards for a touchdown.

After connecting with Agahiu through the Oishei Children's Hospital Stone's Buddies program (which supports families coping with chronic and life-threatening illnesses), the team arranged to have him share White's cubicle for the practice. It outfitted him with a custom-made helmet and uniform.

The nameplate ended up being something White wanted as a keepsake.

"His battle is way more difficult than my story," White told The Buffalo News. "That's why I told them to just leave his name up there, so any day when I'm feeling like I don't want to practice or do this, I can look up there and it's somebody that's going through a way more difficult situation than I'm going through. Because somebody that wanted to be in my shoes, (even though) he really can't, is just something that I don't take lightly."

White doesn't take the things that motivate him lightly, either. That's why he has a photo of a yellow Pro Football Hall of Fame jacket taped above his cubicle. It's a reminder that, unless he can be the best, there's no point in playing the game.

White continues to take the proper steps toward greatness. He had a standout rookie season, and in Sunday's stunning victory at Minnesota, he did a superb job of shutting down Stefon Diggs, one of the NFL's top receivers.

But the yellow jacket is about long-term aspirations. To get one, White knows that besides performing at a consistently high level he also needs to overcome the short-term, day-to-day challenges that NFL players typically face during a season. They include being sore and tired and occasionally frustrated, as White and the rest of the Bills' defenders were after a 0-2 start in which opposing quarterbacks threw for a combined 492 yards and six touchdowns.

Those are the times when looking at that nameplate helps White to push himself that much harder.

"It's just motivating me to just continue to go out there on the practice field and just try to do my best and not to take it for granted," he said. 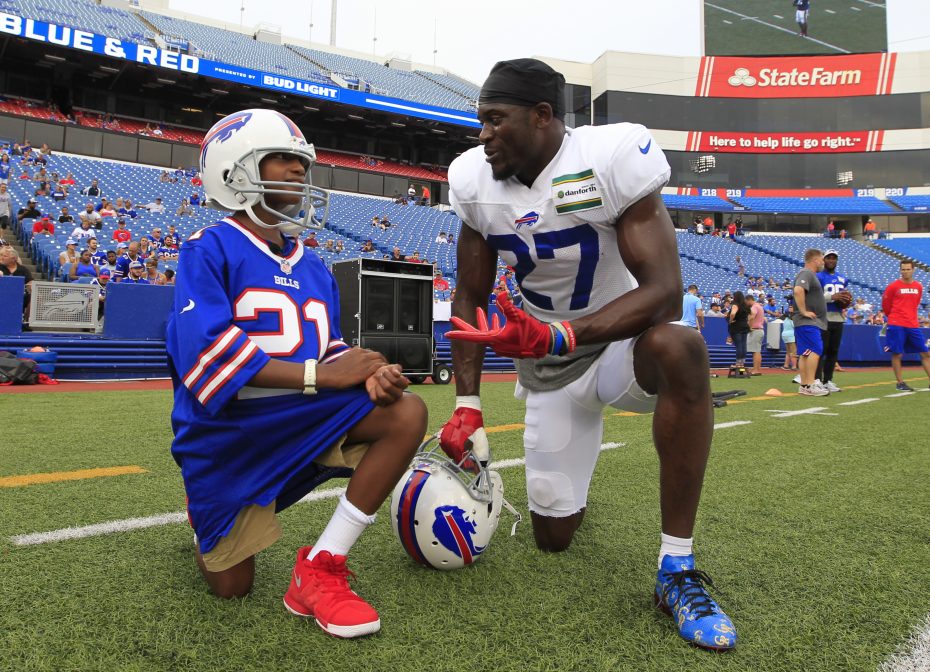 White still can't get over that what he does for a living means so much to an 11-year-old boy.

"If I could motivate somebody and just be that bright light … because I remember being his age before and wanting to be somebody in the league, wanting to be Kobe Bryant, I wanted to be Deion Sanders, people like that," White said. "I mean, it's crazy to me that somebody wants to be me for a day. That's why I sort of try to just live my life the right way, on and off the field, and try to do the best that I can to pretty much motivate people to do great things and inspire people."

On the day of that training-camp practice, the Bills decorated White's cubicle with bright balloons for Agahiu, who wore No. 21 rather than White's 23 because 21 is his favorite number. White autographed a pair of cleats and gloves for his new friend.

Then, he advised him on how to get ready for practice.

"I made sure, if he wanted to be Tre White, he had to be souped-up and dressed in his Adidas stuff, just like me," White said with a grin. "So it was a good deal."