The five decorative carousel horses and lone tiger looked nearly ready Monday to be transported from a North Tonawanda workshop to their permanent home next year at Canalside.

The blond palomino sported a reddish-pink rose bouquet and tassels of silver leafing glazed with oil tint, with colorfully detailed tack work and a salmon-colored scarf collar with gold clasps.

A smaller horse showed off a metal mesh bridle of gold and silver, its black mane suggesting waves of movement.

A third horse looked regal in its silver and gold armor.

"He's my favorite because he's so gallant," said volunteer Jan Bough of Amherst. "The armor is so beautifully done."

The restoration of the half-dozen wooden animals in all from the 1924 Spillman Engineering Corp. carousel should be complete after five coats of museum-quality varnish are applied by volunteers over the next two weeks and jewels and horse tails are added. At that point, 20 of the 34 menagerie pieces that will provide rides for kids of all ages will be finished.

"It's exciting to see these figures returning to their original beauty, and to be just past the halfway point of the carousel restoration," said Laurie Hauer-LaDuca, Buffalo Heritage Carousel's executive director.

"It's been particularly gratifying working on some of the outside rows of animals with details that are extraordinarily carved," she said. "We're excited for the community to see and enjoy them." 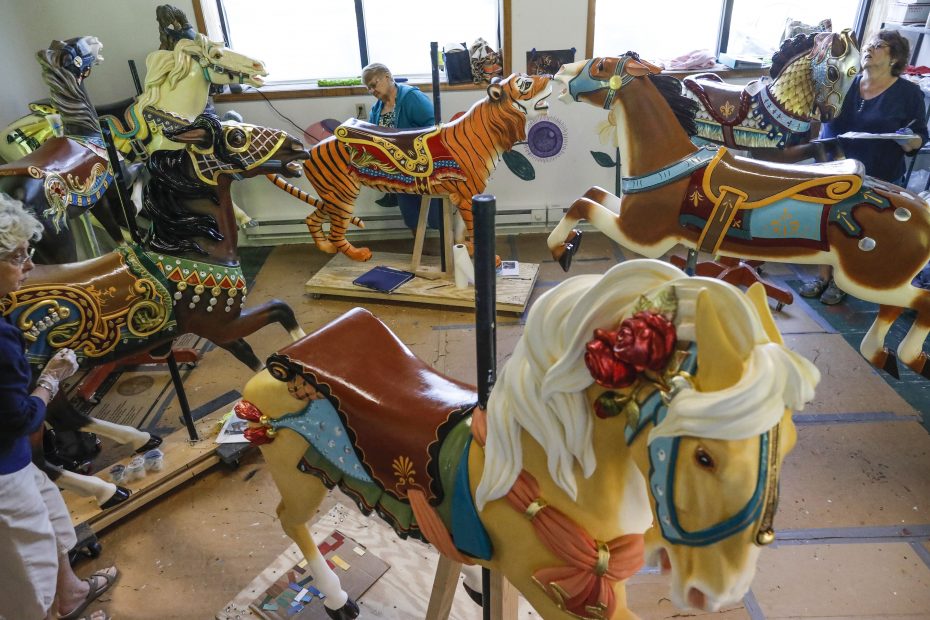 LaDuca and the other volunteers have another reason to be happy: Restaurateur Russell Salvatore is giving the group $250,000 for the naming rights to a meeting room inside the carousel building.

That leaves the group within $1.1 million of its $5.3 million fundraising goal to buy, restore and operate the rare three-row, park-style carousel, including a $250,000 endowment.

Salvatore said the donation will be good for the community and gave him another way to put his name where it will be remembered for future generations.

Inside the workshop space, a stone's throw from the Herschell Carrousel Factory Museum, work is expected to begin in early October on the four biggest animals: a lion, giraffe and the two largest horses.

About a dozen volunteers work at different times on the carousel: stripping, disassembling, repairing and painting the wooden animals.

The group is overseen by Helen Ronan, a Snowbirds member and member of the Buffalo Heritage Carousel board of directors.

"I'd say 90 percent of us are over 70 years old and we travel more than 20 miles to get here and volunteer," said Christine Kasprzak of Cheektowaga.

"It's a privilege to work on these horses," said Barb Wheeler of Depew. "Just to see them come alive. They were such a mess when we started.

"We have a camaraderie here," she added. "We have picnics and we have fun and we go to lunch – and we paint, too," she said with a laugh.

In another room, Rose Hirsch wore a protective mask as she stripped lead paint from a horse.

The group expects to be done on time, having met every deadline so far.

Discussion turned to who will get the first ride on the carousel.

"The tradition is for the carousel to take the maiden ride by itself," Ronan said.

Then she added with a laugh, with knowing glances, "We will get the second ride."