Josh Allen did what no one thought he could do: travel to Minnesota to face the heavily favored Vikings and win. In a matter of seven days Allen’s overall performance grade improved from 73 percent to 94.5 percent. He guided the Bills to their first victory of this season with the grit and flair you would expect from a franchise quarterback, quite literally “hurdling” expectations.

The most important statistic to pay attention to in professional football is the turnover ratio. The Vikings turned the ball over to the Bills three times, while Buffalo did not turn the football over once. This is important and relevant in the study of the game, because statistically  teams that win the turnover ratio win the game 80 percent to 90 percent of the time, regardless of all other considerations. This is the reason there turnovers are such a priority. They are the single most important factor in deciding the outcome of a game.

The Bills made this task look easy as they created three Vikings turnovers that set the stage for the biggest upset of the week in the NFL. These turnovers crippled the Vikings' offense while breathing hope and life into a young Bills football team that believed it was good enough to win this insurmountable game on the road.

Allen’s performance was an astounding leap forward. He was more decisive with his progressions down the field as well as with his decisions to run. This played out early in the game as offensive coordinator Brian Daboll called a nice array of conservative passing concepts to get Allen into a comfortable rhythm. The first drive started with two passes, included a tight end screen, and ended with a surprisingly athletic scramble by Allen as he dove for the front pylon and scored the first touchdown of the game. 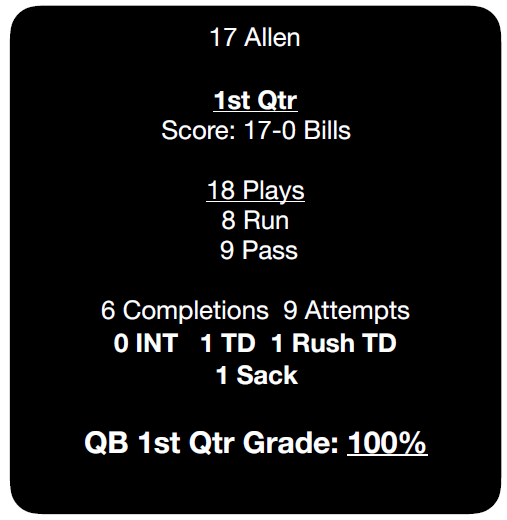 The highlight and perhaps the signature play from the game, however, was Allen’s hurdle over a defender on third-and-10. From a coach's perspective, this dangerous play puts the most valued position, the team leader, in grave danger. If Allen slides, the Bills punt. If he slides, no one on the team or sideline finds any fault because this is basic quarterback protocol. Quarterbacks are taught early on to be smart, to preserve their body, to protect the football, and to always “get down” out of harm’s way. But Allen didn’t slide. Instead, he courageously and instinctively put himself in harm’s way for the team, hurdling the defender as if he were at a track meet. It was a signature play not only for the game but perhaps for Allen as he demonstrated that maybe he is an actual cowboy. It was amazing, risky and exhilarating.

This play was the inspirational spark that demonstrated in no uncertain terms that Allen is the fearless leader the Bills believed him to be.

Allen’s game grade against the highly favored Vikings was his highest of the year at 94.5 percent. He was efficient, completing 15 of 22 passes for 196 yards, but more importantly he did not turn the ball over.

Buffalo did not make any mistakes that could have provided the Vikings with opportunities to get back into the game. The Bills achieved this after jumping out to a 17-0 lead in the first quarter with smart, conservative, efficient offensive execution. Allen did fumble the ball three times, which is cause for concern. Fortunately for Buffalo, either Allen or another Bill maintained possession. These plays, though they were minuses for the Bills, were the reason why the Vikings could not get back into the game. 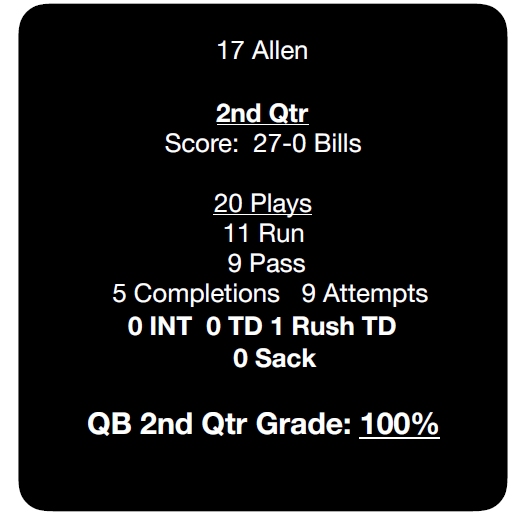 Buffalo went into a field position strategy (which may have seemed boring), punting and playing defense. But at this level, on the road, this was a sign of a patient and well -coached football team. Every player on the sideline for Buffalo knew their role and that this conservative execution was essential to winning.

The late Joe Avezzano, a former coach for the Dallas Cowboys, used to say that it is not how many great plays you make in a game, but how many poor plays you avoid making that will ultimately decide the outcome. This Bills victory illustrated Avezzano’s theory. At this level mistakes matter more to winning games than great plays do. This theory gets players thinking about not trying to do more than their job, which is what Kirk Cousins was trying to do as he fumbled inside of his own 20-yard line resulting in his first of three turnovers. He was trying to be the hero, to make a play beyond his job description. This is the play that started the momentum as Buffalo capitalized on the catastrophic Viking mistake.

Daboll managed Allen and the Bills’ offense with precision and poise. He put Allen in good situations with simple reads, screens and concepts where Allen could be decisive. The young quarterback was much improved this week, quickly progressing through his options on each passing play. This “processing” happened for Allen at a faster rate of speed and he was able to quickly recognize opportunities down the field. But, perhaps more importantly, he demonstrated his ability to throw to his check down when needed. This maturity and patience is a sign of great progress for the Bills. Allen threw the ball with authority, touch and accuracy. 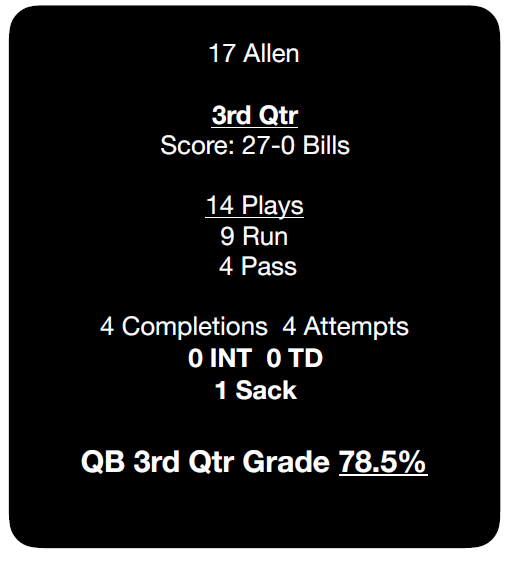 The Bills’ rookie quarterback  had three balls dropped. Kelvin Benjamin dropped a “slant” route that could have been a touchdown. Charles Clay dropped a “flat” route in the end zone, and Robert Foster dropped a “go” route down the left sideline in the second quarter that could have been a big play for the Bills. Yet with each missed opportunity, Allen was enthusiastically pressing forward with a positive mindset. He was unfazed by miscues or missed opportunities. He just went to the next play and made the difference.

The combination of Allen’s fiery passion, his lack of mistakes and his inspiring runs led the Bills to the improbable victory. His performance, his execution and his fortitude forged this young Bills team into the win column, demonstrating above all else that like a cowboy from the Wild West he has no fear.