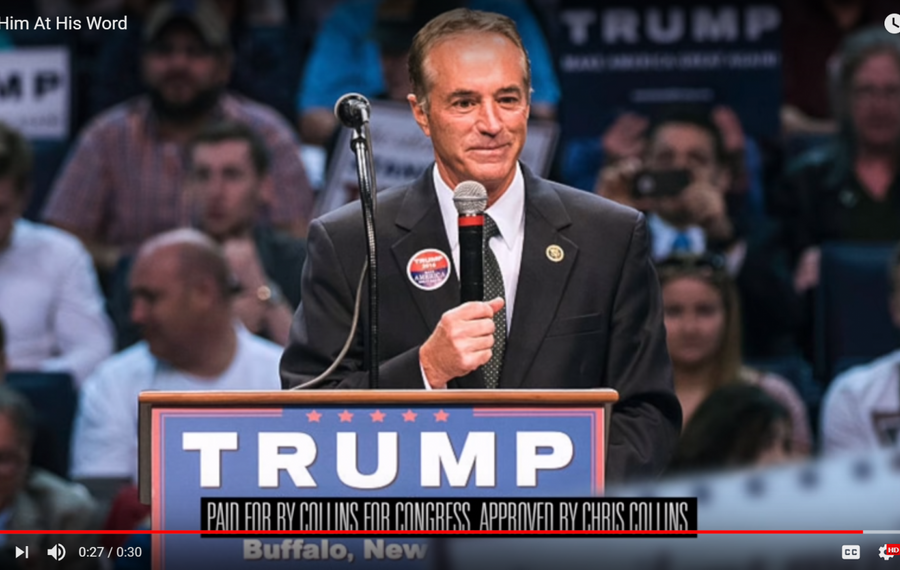 Many politicians seem obsessed with their image, but not Rep. Chris Collins.

In fact, it seems the Clarence Republican – indicted on charges of federal insider trading – didn't leave his own picture on his first campaign ad long enough.

And if it does, the Collins campaign could end up paying much more for future campaign ads than they would have if that ad had just dwelled on Collins’ image for a second longer.

At issue is the picture of a smiling Collins, standing behind a Donald Trump campaign sign, that appears in the last three seconds of the ad when the lawmaker says: "I'm Chris Collins, and I approve this message."

Federal law requires that sort of disclaimer – with the ad sponsor's picture – to appear for a full four seconds at the end of political ads. And if they don't, broadcast stations can charge the campaign the full rate for future ads, rather than the cut rate political campaigns are supposed to get.

And that's just what Frank Housh, an attorney for the McMurray campaign, said he wants in a letter to the general managers of WGRZ and WIVB, which started airing the Collins ad on Friday.

"From now through Election Day, your station should charge Chris Collins and his campaign committee the same rate for broadcast time that it charges nonpolitical advertisers for comparable use," Housh said.

For Collins and McMurray, a nasty, brutish and short campaign

That's unlikely to happen, at least not at WGRZ.

"If it is determined to be under four seconds, it's probably our fault for accepting it," said Jim Toellner, president and general manager of WGRZ.

He said station officials thought the disclaimer at the end of the Collins ad clocked in at four seconds, but they'll take a second look at it on Monday and possibly ask the campaign to make sure its disclaimers are four seconds long from now on.

If such disclaimers are less than four seconds, it could end up costing the Collins campaign thousands of dollars. In a 2014 piece in Roll Call, political analyst Nathan Gonzales cited several campaigns that were forced to pay higher rates for their advertising because of ads that didn't comply with the law.

"A disclaimer may seem like a rote few seconds in a campaign ad, but failing to follow the specific guidelines could have costly consequences for a candidate," Gonzales wrote at the time.

That's just what Housh is hoping. He said he would appeal to the Federal Communications Commission if the local stations don't start charging Collins more for advertising.

The Collins camp didn't think much of the dust-up over the ad, which decried McMurray's work as a lawyer in South Korea and distorted what he did there.

“This ad is already doing serious damage to Nate McMurray’s campaign, and we are happy to keep talking about it," said Natalie Baldassarre, the Collins campaign spokeswoman.