Craft brewing and distilling have become serious business in Buffalo.

The proliferation of both have given birth to homegrown tastes and brightened previously dormant addresses. Drinkers with sophisticated palates can explore their favorite tastes, then weigh each on their locally sourced ingredients, mouthfeel and magnitude within their given designation.

But aside all the consternation, it’s important to remember that, ideally, drinking should come with a few laughs. That why, when relaxing inside the comfortably rustic Buffalo Distilling Co. with a few rounds of its double-entendre-named line of spirits, it’s OK to drop the solemnity, smile and take a sip.

Established by Andrew Wegrzyn and Frank Weber III inside the ever-growing footprint of Buffalo's Larkin Square neighborhood in 2017, the locale reignites the aim and moniker of its namesake. 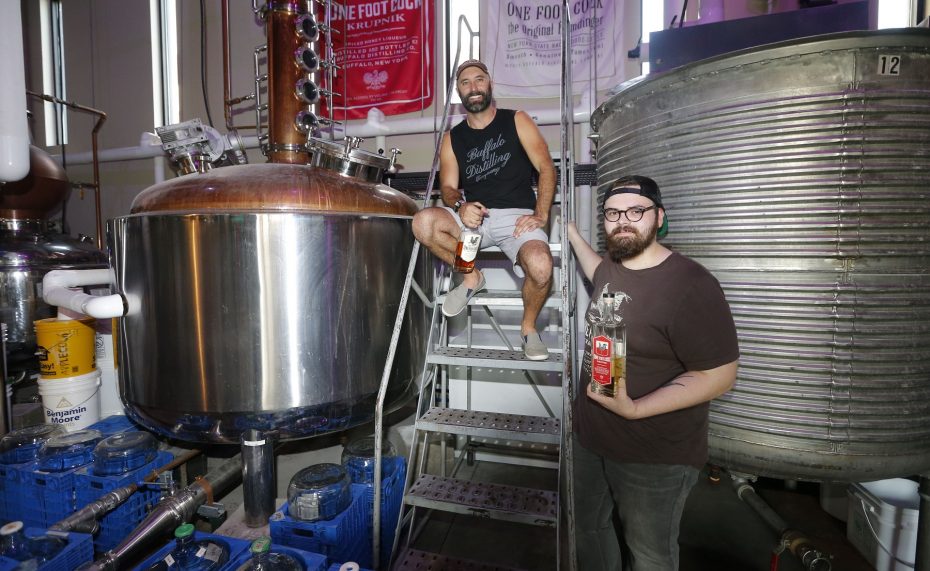 Opened in 1893, the Buffalo Distilling Co. produced whiskeys and gin enjoyed by those toiling on the Erie Canal or living against the backdrop of the 1901 Pan-American Exposition. The approach of Prohibition sent its stills into sedation, but Wegrzyn and Weber reassigned the name to its farm distillery in Bennington, and have brought the brand back after nearly 100 years in dormancy.

Now, Buffalo Distilling Co. is slinging spirits once again, and amid a new period of resurgence for both the city and interest in its product.

Beautifully cultivated in a former carriage manufacturing building along Larkin’s beautified stretch of Seneca Street, the locale complements its former Hydraulics District backdrop and the selections they serve, particularly its One Foot Cock bourbon whiskey. 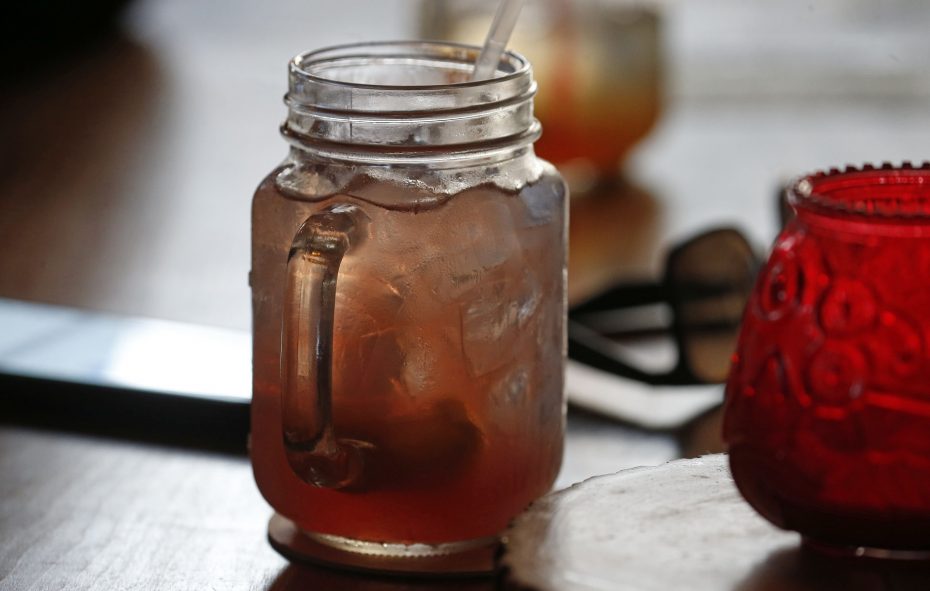 A Violet Beauregard cocktail at the bar at Buffalo Distilling. (Robert Kirkham/Buffalo News)

Guests can settle into bar spots or stools and swirl the spirit—initiated with a mash made from local barley, corn and wheat—aside exposed timber and walls lined with weathered pallet slats.

With a slew of antique decorative elements (including old carriage equipment to give a nod to the address’s previous function), it’s an idyllic backdrop for patient sipping of its bourbon, straight bourbon or similarly hued apple brandy.

And as the season changes to fall, its selections and ambiance become even more appropriate. Whether inside its barroom or among the falling leaves off its sidewalk patio that is accented with wooden pews from a downtown church, patrons can enjoy Buffalo Distilling’s spirits straight up or in cocktails, with names as tongue-in-cheek as its flagship bourbon’s.

Its take on the White Russian is The Cockasian, made with its own vodka, cold-pressed coffee syrup from the First Ward’s Undergrounds Coffee House ($6). The Hong Kong Phooey ($9) features bourbon and its ginger simple syrup, made in house like the rest of its homemade ingredients. 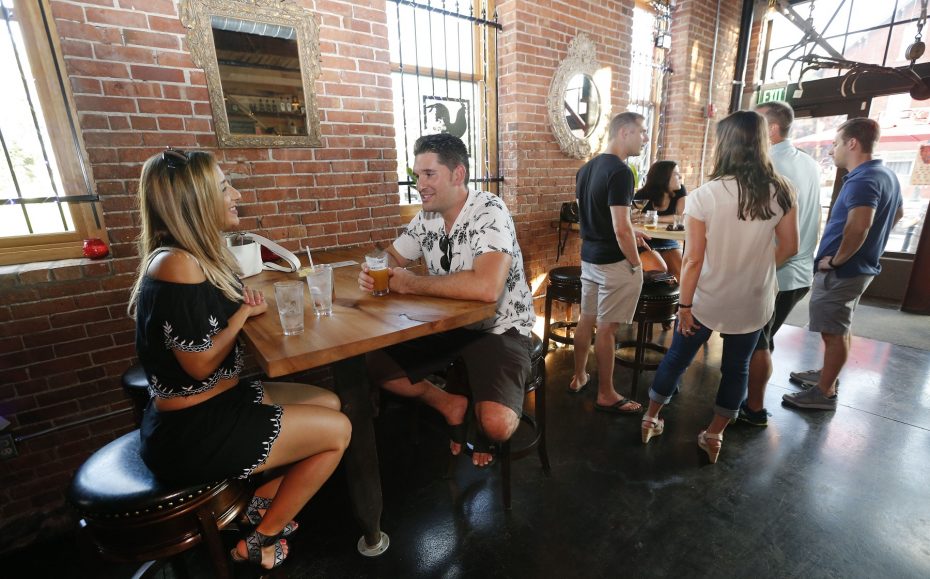 The Full Moon ($6) melds its moonshine with ginger beer, rosemary syrup and a brandied cherry. Top these off with its seasonally appropriate neighborhood homage, The Larkinville (made with bourbon, New York maple syrup and bitters; $9).

Enjoy each selection with Weber’s-slathered sandwiches, pierogi or pretzels from local purveyors like Ru’s and BreadHive (with options from $4 to $13). Stop in after Larkin Square’s Food Truck Tuesday or settle in for live music, tucked into its barroom’s corner four nights a week.

And yes, let a sophomoric grin slip at the name attached to the spirits—then savor the tastes inside another ambitious drinking destination, nestled in the Nickel City.

Beer: Drafts from nearby Flying Bison, as well as assorted bottles and cans.

Don’t forget to: Grab a bottle of its various spirits, including its signature One Foot Cock bourbon whiskey, to take home after your visit. 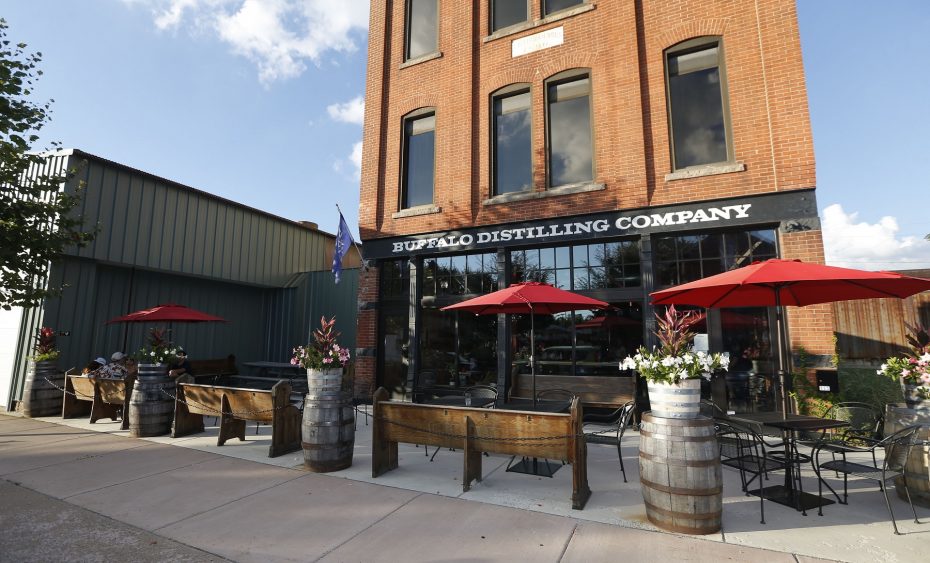