When Erin Parisi was growing up as Aron Parisi, the Clarence native couldn't have imagined the journeys lying ahead.

This year she climbed the highest mountains in Europe, Africa and Australia.

Next year she will travel to Chile to take on South America's highest mountain.

It's part of her quest to climb the "Seven Summits," as mountaineers call them, the highest peaks on every continent.

Many have done it before, but Parisi is striving for something unique.

She wants to be the first known transgender person to ascend all of those peaks and the first transgender climber to reach the planet's highest point, Mount Everest.

Her reasons for taking on the challenge are intensely personal.

"The largest was that I’m proud of who I am," Parisi said. "I no longer want to hide, and I was discouraged that there had been a history of trans people relegated to the shadows."

"I saw the Seven Summits as a way to tell the world I didn’t need to hide anymore," she said. "It’s hard to argue I’m hiding when I’m standing on the highest hill I can find. I also loved the statement that when you stand on the highest point in a continent, there’s nothing left to cast a shadow on you. So, symbolically this is an opportunity to announce that trans people won’t be relegated to shadows anymore."

It's a journey that Parisi, 41, might not have imagined when she was Aron Parisi, a boy who played football at Clarence High School.

Coming out was a decision that Parisi had been grappling with for years.

"I spent most of my life in denial, convincing myself that (gender) transition was for someone else," Parisi said in an interview. "I figured I could push it off in my life long enough that I could outlive it or outrun it or outhide it, and that's just not how your self works. No matter how long you wait or where you hide, you're kind of always there. I thought that if I just did it day by day and just focused, that I could live a more conventional model for longer. I couldn't deny who I was forever. It's not how I could continue to live." 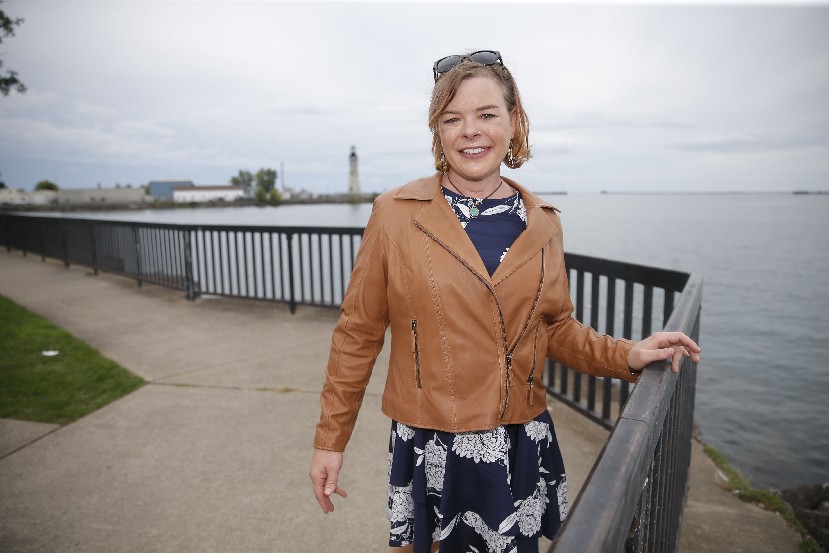 She called the marriage a final effort to be "conventional."

The marriage ended in divorce.

"I don't blame her," Parisi said of the woman who married Aron Parisi. "She definitely didn't know beforehand. I wasn't able to salvage that situation."

Parisi's parents had no idea.

"It was a surprise," said her father, Edward Parisi, who lives in San Diego. "I didn't see it coming, but because she is my child and I love her, I want to support her in this."

"It was a shock, I have to say, because I didn't really have any inkling when she was growing up," said her mother, Alana Weeks, who lives in Buffalo.

After graduating from Clarence, Parisi earned a business degree from the University at Buffalo in 1999 and worked for HSBC in downtown Buffalo for two years.

She remembers deciding to leave Buffalo and to someday become a woman during a lunch break while sitting on the breakwater at Erie Basin Marina in 2001. Parisi chose Denver, not knowing anyone there.

"I knew I liked to ski – I grew up skiing at Holiday Valley – so I said, 'They've got big mountains out there, big climbs and big ski slopes and that stuff, so let's switch it up and go out there,' " Parisi said. "This was before all the social media stuff, so you kind of had the idea you could live disconnected, and I could have done my thing without anybody knowing. I was young. It didn't really work out."

Parisi soon landed a job with CenturyLink and has been with the telecommunications company for 16 years, currently as a real estate manager.

Colorado also was a great place to pursue the adventure sports Parisi loves. 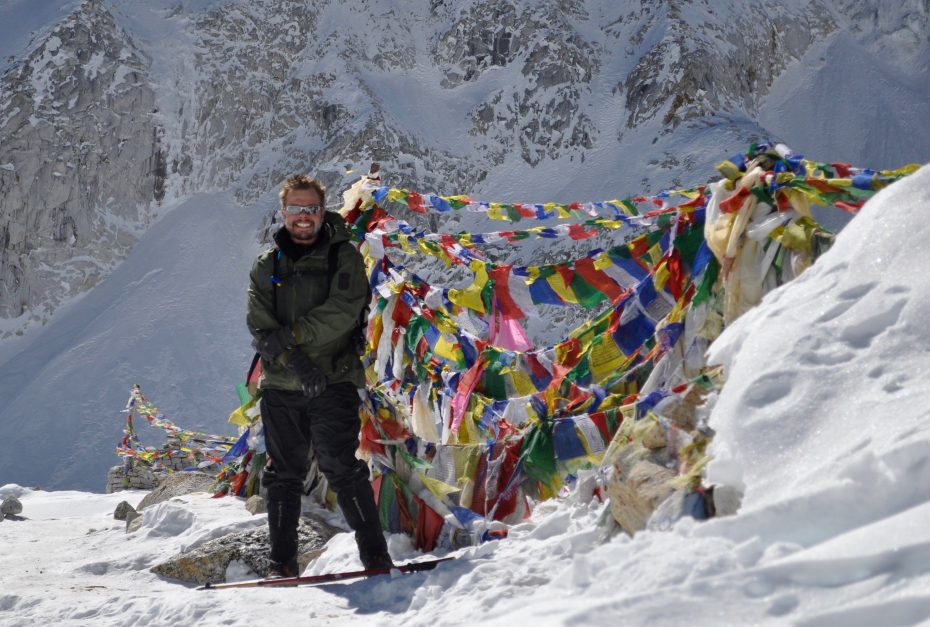 Parisi, 37 at the time, during a mountain climb in Nepal in 2015, before her transition. (Photo courtesy of Erin Parisi)

Parisi, who stands 5 feet 8 inches and weighs about 165 pounds, has climbed 18 mountains in Colorado that are more than 14,000 feet high.

"A lot of people kind of counted me out when I came out," Parisi said. "The medical stuff has slowed me down a little bit, because I've had three surgeries in the past year. But I've definitely proven any doubt I had in myself wrong at this point."

The first stop on her world climbing tour was Australia. At 7,310 feet, its tallest peak, Mount Kosciuszko, barely qualifies as a mountain by Colorado standards. Parisi scaled it Feb. 11.

"Australia was exactly what I needed when I needed it. It was a solo girl's trip that I could spend on the beach drinking Shiraz and climb a pretty easy mountain and get this whole mission kicked off. Australia was a cakewalk," Parisi said. "But it's the first trip I ever went on with my new passport, properly named and properly gendered."

The passport got its next stamp in March in Tanzania, home to Africa's tallest mountain. Aron Parisi had climbed Mount Kilimanjaro in 2011, and Erin Parisi did so March 8 – International Women's Day.

"It's the bucket list mountain," Parisi said. "It's being climbed by a couple hundred thousand people a year, and 90 percent of them are making it to the top. It's pretty tame, but nothing's easy at 19,341 feet."

In Tanzania, there might have been more risk at sea level.

In June, Parisi took on the highest mountain in Europe. Mount Elbrus rises 18,510 feet in the Caucasus region of southern Russia.

She arrived in Russia on June 14, just as the World Cup soccer tournament was beginning in that country. The U.S. State Department marked the occasion by posting a terrorism warning.

"They warned against traveling to Mount Elbrus, said that kidnappings were happening, said there was no consular support because U.S. Embassy officials and diplomats are not allowed to travel the region, and they also made note that gay men have been subject to extrajudicial killings in and around the Mount Elbrus and Chechnya area. So that's what I woke up to the day that I got to Russia," Parisi said. "Luckily, I didn't have any problems."

She reached the summit of Elbrus June 21.

Three down, four to go.

Next on the agenda is Mount Aconcagua in the Chilean Andes, the highest mountain in South America at 22,841 feet. Parisi's assault on the peak is scheduled to begin Jan. 26.

Parisi said a Denver restaurant is sponsoring the climb in memory of a transgender employee who committed suicide last year.

After that, Parisi will head to Mount Denali in Alaska, the tallest peak in North America. Her attempt there is tentatively scheduled for next summer.

Then she will attempt to climb Mount Vinson, the highest point in Antarctica, in late 2019 or early 2020. She's saving the toughest climb for last: Mount Everest in Nepal. It's the tallest peak in Asia and the world, and she's targeted that climb for May 2020.

"I have every confidence in her, so I knew she would prepare appropriately. But as a mother, of course I'm concerned," Weeks said. "Probably not so much the lesser mountains, but the thought of Everest still makes me cringe a little bit. But she's doing what she wants to do and it's making her happy, so that's really my major focus."

"I think it's a worthy goal to show that she's just like everyone else that has goals and wants to accomplish them," her father said.

This is not a cheap pursuit. Parisi estimates that it will cost $42,000 to climb Vinson and about $60,000 to climb Everest. Parisi has set up a not-for-profit entity called Transending to accept donations for her climbs.

She also saluted CenturyLink for giving her time off for her surgeries and letting her use flex time for the climbs.

Parisi recalled how a supervisor reacted to her gender change.

"She never even hesitated. She said, 'You tell me when you need support, what you need and how we can make this easier for you, and we'll do it,' " Parisi said.

"A diverse workforce is one of our greatest strengths in a competitive global marketplace," CenturyLink spokesman Mark Molzen said. "Our employee policies reflect our interest in maintaining an environment where all our employees can maximize their individual potential."

"The transgender community has certainly been more in the spotlight lately, and the attitudes cross all the spectrums, from totally intolerant to supportive, and I see the people that take time to think about it end up being the most tolerant and accepting of it," Edward Parisi said. "I see this as a legitimate cause, and the trans community certainly deserves a place in our society and deserves to be respected and protected."

"After all is said and done, she's my daughter, she's my child, I love her and I want her to be happy, and if this is going to make her happy then that's all I can hope for,"  Weeks said.