No matter what the calendar says, at Cherry Bank Farm, fall officially began a week ago.

That’s when a hydraulically controlled gate lifted to let the season’s first Ginger Gold apples roll down a ramp into the roaring maw of the apple grinder at the Sanborn farm.

It marked the start of a two-day process that saw Cherry Bank’s first cider of the season sold to waiting customers last Wednesday.

It also marked the start of the farm’s retail sprint. From the first cider to the day before Christmas Eve, the family farm in Sanborn makes its money for the year, said patriarch Kermit “Barney” Kelsch.

Inside a century-old barn moved to the site decades ago, customers can shop for a cartload of things besides cider. There’s freshly baked pies with scratch-made crusts, each with filled with local fruit, plus coffee cakes, cookies and muffins.

There’s up to 15 varieties of apples, and apple cider slushies. Jams, jellies, syrups and decorative gourds all appeal to customers during the pre-holiday shopping season. There’s also fresh-pressed Concord grape juice, for about two weeks, until it’s gone.

Your guide to the full cider experience in WNY

But it’s the cider that pulls people back, year after year. Cherry Bank Farm makes some of the most addictive cider in this part of the state. 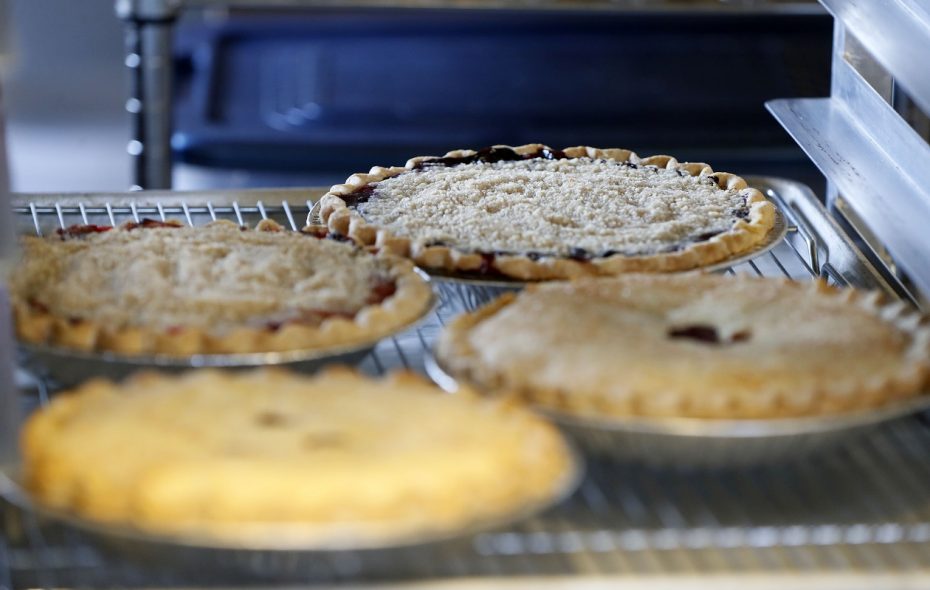 “We have people who come from all over, Pennsylvania, Ohio,” said Fran Kelsch, Barney’s wife and business partner. “They take back a bunch and freeze it.”

“If we were a bigger company and had advertising, we’d say, ‘Our cider is like drinking your apple’ – it’s got that fresh flavor,” she said.

In 1944, Barney’s parents started selling cider made from Cherry Bank Farm apples. In 1954, they installed the first mill of their own. “We took it over from his parents in 1971,” Fran said.

For decades, Barney worked a day job at Sears as well, while Fran held down the fort back at the farm, raising seven children.

Every season, the farm’s apples went into cider. About seven years ago, Cherry Bank started buying the apples from a local processor instead.

“When you used all your own apples, you made the best of it,” Barney said. “By going to the processor, it’s easier to get different varieties to adjust the cider to taste.” 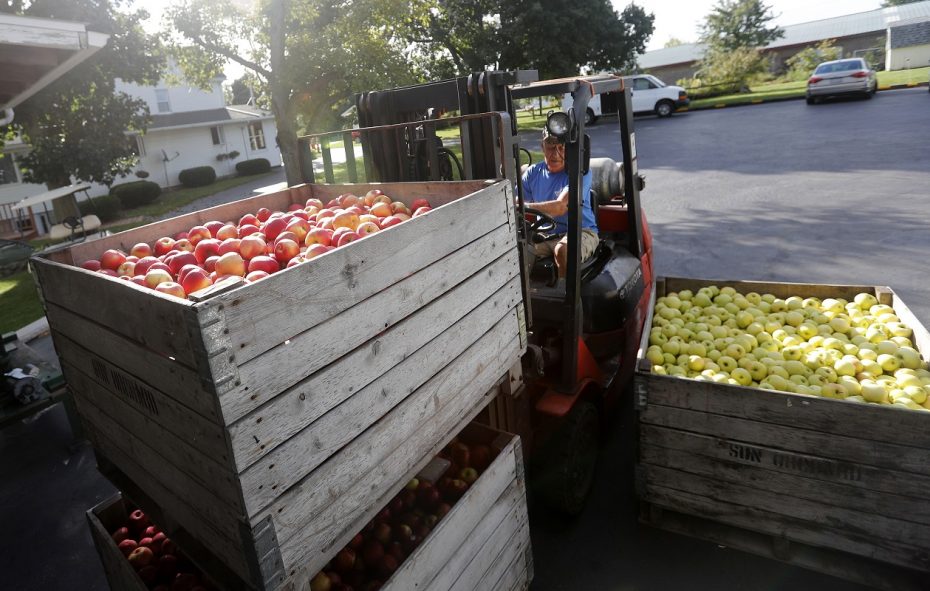 This season, Cherry Bank is starting with Ginger Gold, Jonamac and Gala apples. The Kelsches might use four more varieties before they’re done. Using different varieties lets them adjust the blend, based on each year’s apples.

Barney said he “can pick an apple out of a box and take a bite out of it, and tell you how it’s going to go with the others.”

This time they’re starting with Ginger Gold, “tarter than anything else we press this year, but you want a little tartness in there, you don’t want it all sickeningly sweet,” he said. “You got something like that and you add a little acid to it, you get some taste out of it.”

At a processor, apples are sorted, with the best going to fresh sales. Fruit that is oddly shaped, the wrong size or color, is sorted out. That’s what Cherry Bank uses for cider. All fresh local apples, picked this season. Not last year’s from emptied-out storage bins, or trucked in from out of state.

They’re kept cold, then ground. The pulp is fed into the accordion-like folds of the press. The runoff is piped into refrigerated stainless steel tanks, where it’s allowed to settle overnight, for clarity. 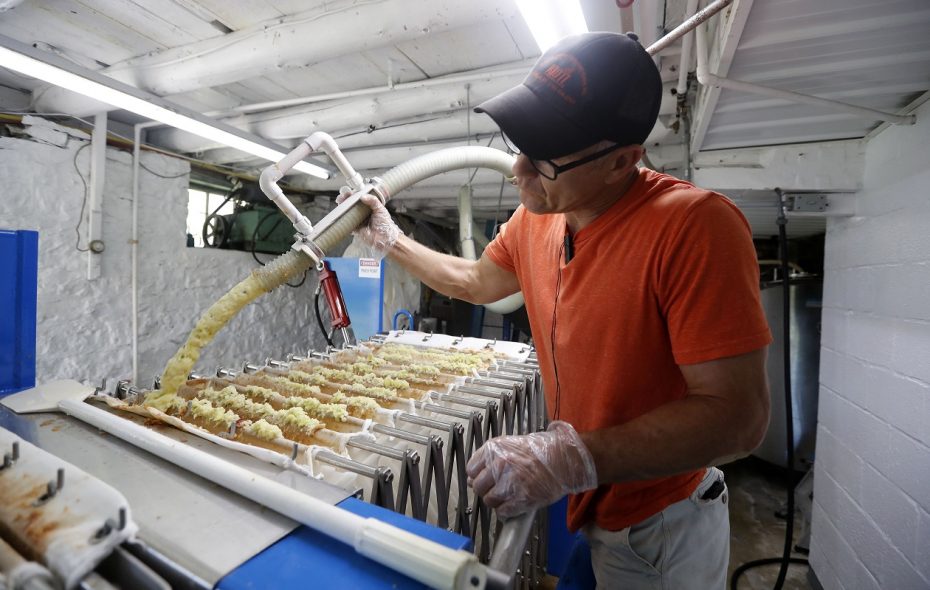 Then it’s run through an ultraviolet sterilizer, remaining cold instead of being heated by a pasteurization process.

“Pasteurization is OK, but it brings it up in temperature, and changes the flavor, so it’s like the difference between eating an apple and applesauce,” said Fran.

Then cider is piped into plastic jugs, capped, and sent to the walk-in cooler. Cherry Bank presses every two or three days, not on a set schedule, Fran said, avoiding stockpiling.

“There’s no preservatives, so it has to be refrigerated. You should treat cider better than you would treat milk,” Fran said. “Don’t ride around with it in your trunk for three or four hours.”

All cider producers are sticklers for detail, with state-inspected workers to ensure sanitary products for consumption by the public. But how many have pulled their products from a supermarket because they wanted to protect their cider’s reputation? 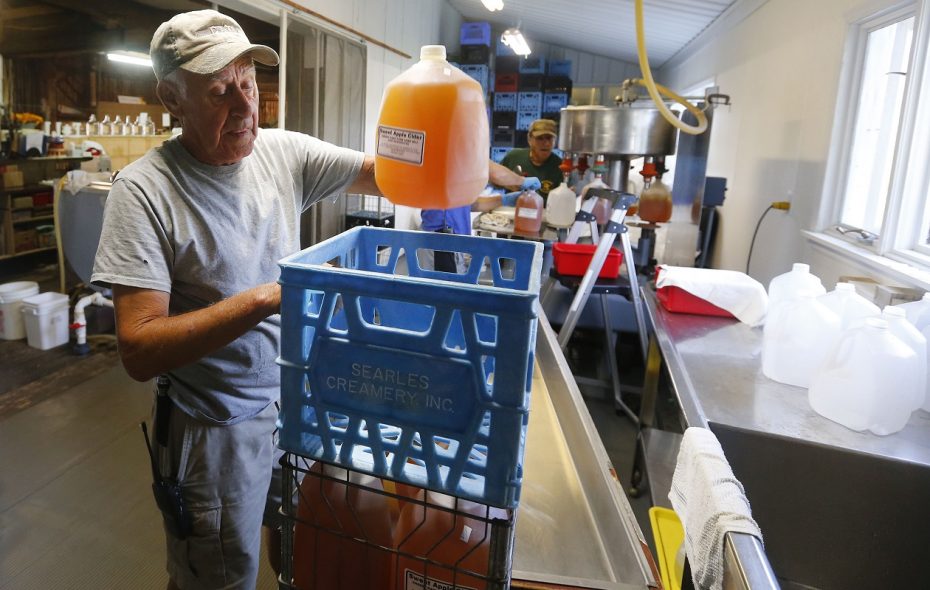 About seven years ago, Cherry Bank cider was selling briskly at an Amherst supermarket when Barney went in to check on it. He found it stocked in cheese coolers, which allowed the top of gallon bottles to rise to 45 degrees. That would give it a shorter shelf life once the buyer got it home.

“I said OK, goodbye,” he said. It wasn’t the only place that lost Cherry Bank, either.

Today, Cherry Bank cider is available at the farm, 5140 Townline Road, Sanborn, at the North Tonawanda Farmers Market, and Goodman’s Farm Market, 2227 Cayuga Drive Extension, Niagara Falls. The only other way to get it is to be a student at Wheatfield or Starpoint schools.

For all the Kelsches’ work, they’re holding the line on the cider price: $5.75 a gallon, same as last year.

While its makers attribute the Cherry Bank difference to numerous technical factors in ingredients and production, it really boils down to one thing: “We’re pretty fussy,” Barney Kelsch said.