As the Buffalo Police Department moves toward equipping more than 500 police officers with body-worn cameras, a police advisory panel is raising concerns that the officers may be given too much discretion on when they turn the devices on and off and about how much access the public will have to the footage.

The Buffalo Police Advisory Board told city lawmakers last week that the department's proposed rules could potentially undercut much of the rationale and effectiveness of equipping police officers with body cameras in the first place.

In a city where over the last 20 months a man died during a struggle with police and two men were fatally shot by police – most recently the Sept. 12 fatal shooting of Rafael "Pito" Rivera on the West Side – it was a message that seemed to resonate with some Common Council members, who also urged the police department to be as transparent as possible.

The Police Advisory Board raised five concerns about the proposed body-camera policy:

The Police Advisory Board, which was created earlier this year by the Common Council and reports to the Council's Police Oversight Committee, is comprised of 11 city residents from a range of backgrounds. The board made a presentation to lawmakers on Tuesday.

This isn't the first time concerns have been raised about the department's proposed policy for body cameras, which officers are expected to start carrying later this year or early next year. 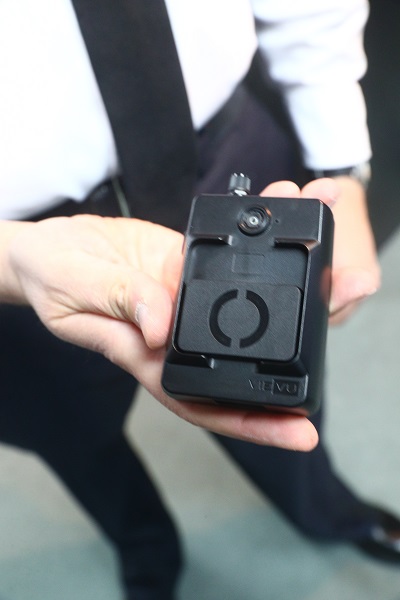 One of the body-worn cameras tested by the Buffalo Police Department earlier this year. (John Hickey/News file photo)

In the spring, the Partnership for the Public Good called for Buffalo police to engage with the community and tighten its body-camera policy before adopting its final version.

The police department says it wrapped up its body-camera pilot project at the start of September in which about 20 Central District officers on the afternoon shift tested two types of cameras over about six months. The department expects to pick a vendor for the cameras "in the next couple months," Police Capt. Jeff Rinaldo said.

In order to equip its roughly 550 police officers with body cameras, the department plans to deploy the equipment to personnel in the city's five police districts one at a time, Rinaldo said. Officials estimate it will take two to three months per district, so when the rollout begins in December or January, it may take 10 to 15 months before every officer in the city is wearing a body camera.

The time is needed because each officer will go through an eight-hour training on the equipment. The department also needs to set up equipment in each district station and department headquarters, Rinaldo said.

Department brass have been speaking internally on how they will address the release of body-camera footage, Rinaldo said.

"We are hoping for as much transparency as can be achieved through the body-camera video," he said. "But, however, the public still has to understand it is evidence, no different than the gun that we seize or the drug that we seize or any other piece from a crime scene." Evidence in open criminal investigations is typically not released to the public.

The upfront equipment costs are expected to be about $1 million, with the costs of video data storage anticipated to be between $1 million and $1.5 million annually, Rinaldo said.

Lawmakers said they have been hearing concerns from constituents about the protocol for the release of video footage.

"In the court of public opinion, it doesn't matter what you put out, people are going to think whatever they're going to think," Masten Council Member Ulysees O. Wingo Sr. said. "But at least if we're proactive in getting the information out we can have somewhat control of the narrative so that we can at least say, 'This is what we have.' "

Being upfront with the community would help reduce speculation, Wingo said.

"The more questions we can answer before they become questions, I think the better the relationship," he said. "And then it goes to show there's nothing to hide."

Among its recommendations, the panel wants the department to specify additional types of circumstances when police officers should have their cameras on, possibly including during "emergency driving situations," "any searches of a person or property" and "any situation that requires the use of force."

Under the most recent draft of the policy made available to The News, officers would be required to activate the camera in any "enforcement-related" activity, including during calls for service, traffic stops, executing search warrants, arrests, "investigatory activities" and "confrontational/adversarial citizen contacts."

The latest draft also says officers would not be required to turn on their cameras when there is "an immediate threat to the officer's safety," when turning it on "would delay an officer's response to the safety needs of a citizen or fellow officer during a critical incident" or when it "would be impractical and place the officer in a tactical disadvantage."

"It should be possible to tighten up these exceptions," the advisory board wrote in an eight-page discussion paper.

The department has not yet determined whether it would consider body-camera footage as part of an officer's personnel record, which would legally require that the footage could not be disclosed. The Buffalo Police Benevolent Association will have input on that part of the policy, Rinaldo said.

Police officials said they would be willing to meet with the advisory board next month, once the department's move to its new headquarters is completed.

Lawmakers emphasized the importance of getting the body-camera policy right.