Calle Rosen's shot from the point threaded its way into the net for a power-play goal with 9:28 left Saturday night, snapping a tie and sending the Toronto Maple Leafs to a 3-2 exhibition win over the Buffalo Sabres in KeyBank Center.

The Leafs swept the weekend home-and-home series between the Atlantic Division rivals and improved to 4-0 in the preseason. The Sabres are 2-2.

The game was played before an announced crowd of 17,624, including the usual thousands of Leaf fans that cross the border.

Rosen's goal came with Kyle Okposo in the penalty box on a delay-of-game call after flipping the puck over the glass.

The lineup: Buffalo's top line in this one was Jack Eichel between Jeff Skinner and Tage Thompson. Patrik Berglund opened between Evan Rodrigues and Sam Reinhart while Johan Larsson centered Okposo and Justin Bailey and Kyle Criscuolo was in the middle of a fourth line with Scott Wilson and Tyler Randell. Midway through the game, coach Phil Housley flipped Thompson and Reinhart.

The defense pairs seemed to be the likely  top six of the regular season. That would be Marco Scandella-Rasmus Ristolainen, Rasmus Dahlin-Jake McCabe and Nathan Beaulieu-Zach Bogosian.

Quick start: The Sabres took a 1-0 lead at 4:17 of the first period on Okposo's power-play goal, a wrist shot that utilized a Reinhart screen to beat Frederik Andersen. It marked the fourth time in four games this preseason that the Sabres have opened the scoring.

Nifty hands I: The Leafs got even at 2:42 of the second period as Auston Matthews deflected a pass across the slot from former Sabre Tyler Ennis high over Carter Hutton's right shoulder.

Nifty hands II: Toronto further energized its legion of fans in the building when Jeremy Bracco authored a midair deflection of a Justin Holl point shot to put the visitors in front, 2-1, at 5:37 of the second period. The tip sent the puck bouncing through the crease and past Hutton.

Pulling even: The Sabres got squared up at 2-2 on Skinner's first goal of the preseason, as he pulled a Reinhart rebound around Andersen and backhanded the puck home with 12.3 seconds left in the second.

In the nets: Hutton played the entire game for Buffalo and was sharp in making 30 saves. He also showed his savvy with the puck in making two long passes to get it out of the zone and start the attack.

Schooled by your elders: Dahlin had a couple grievous turnovers in the first period. On one Buffalo power play, the 18-year-old was stripped of the puck at the Leafs blue line by 39-year-old Toronto veteran Patrick Marleau to create a breakaway. Marleau -- whose NHL career began in 1997, three years before Dahlin was born -- went in alone from center ice but Hutton stopped his attempt.

"There was some [stuff] out there that happened but you learn," Dahlin said. "Every player out there knows hockey very well. It takes some time to learn how to handle it."

"He's a young man and he's going to make mistakes," said Housley. "One of the hardest things for him will be knowing who he's playing against and just the personnel on everybody's team and their characteristics. That will take time to know ... Marleau has done it for 18 years."

Second-half surge: The Sabres were getting outshot, 21-10 midway through the second period and the count was 9-1 in that period. It finished 12-12 in the period and the Sabres had a 35-31 advantage for the game.

"The first period helped, getting a couple power plays where I could feel the ice a little bit," Reinhart said. "Get that part down and get some reps out there. It was more challenging in the second and third when the pace picked up at 5-on-5 and on compete level. But overall, I thought the legs handled it well."

"He was our best forward. He looked very comfortable," Housley said of Reinhart. "He fit right in. He was on the puck, making plays. He was trying to make a difference tonight."

"I felt pretty good, about as expected from being off that long," Bogosian said. "But I tried to keep things short and hard right away, make a good first pass and just try to build off every shift."

Pugilism report: Toronto's Emerson Clark and Buffalo's Tyler Randell exchanged blows early in the second period and can renew their disagreement in the AHL at a Rochester-Toronto game. Early in the third period, Thompson and Toronto defenseman Andrew Nielsen went at it after the Leafs blueliner cross-checked Thompson in the back,  not drawing a call from the officials. 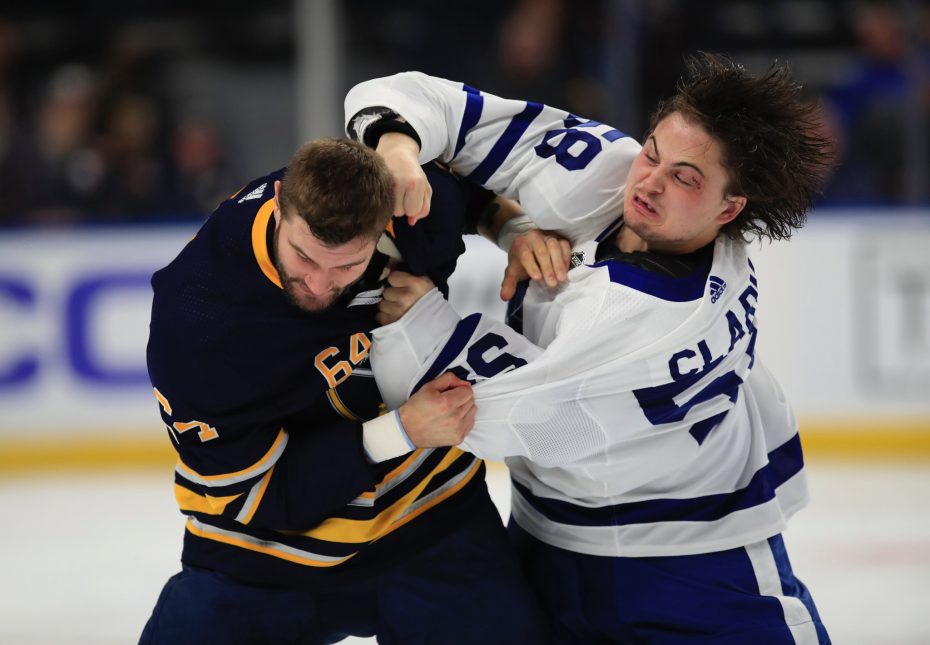 Tyler Randell of the Sabres and Emerson Clark of the Leafs trade punches in the second period (Harry Scull Jr./Buffalo News).

What's next: The Sabres are off Sunday and return to practice Monday morning with two sessions in KeyBank Center. When off-day practices are in the arena, it's now regular-season mode and those sessions are closed to the public.

The next preseason game is Tuesday night, when the Sabres play the Columbus Blue Jackets in the Hockeyville USA game in Clinton, just west of Utica. The game at Clinton Arena will be nationally televised by NBC Sports Network. Buffalo then plays Wednesday in Pittsburgh before finishing its exhibition schedule Friday against the New York Islanders in Oshawa, Ontario.

With a week left in preseason, Sabres have some interesting choices