Tending to the souls of parishioners who attend St. Francis of Assisi Church in Athol Springs is a full-time job for the Rev. Ross Syracuse.

That doesn't mean he doesn't have time for hobbies that would have made the church's namesake proud.

Syracuse is a two-hive beekeeper who also grows monarch butterflies and vegetables.

“I’ve always been into nature, and I’ve always had a garden,” said Syracuse, as he stood in a saffron sea of sunflowers that was planted by chipmunks.

“Chipmunks enjoy the seeds that fall from our birdfeeders and bury them for future meals,” he explained. “But the seeds germinated before the chipmunks had a chance to feast on them."

Spend any time with Syracuse, and you can feel the joy he feels around his flora and fauna.

“See the monarch right there? She’s laying eggs,” said Syracuse, pointing to the colorful butterfly. The friar stooped down to examine the undersides of the milkweed he planted to attract butterflies.

Milkweed is the host plant of the monarch butterfly. The egg planted on the leaf’s surface will eventually become a caterpillar and form a cocoon for 10 to 14 days before emerging as a monarch butterfly, Syracuse explained. 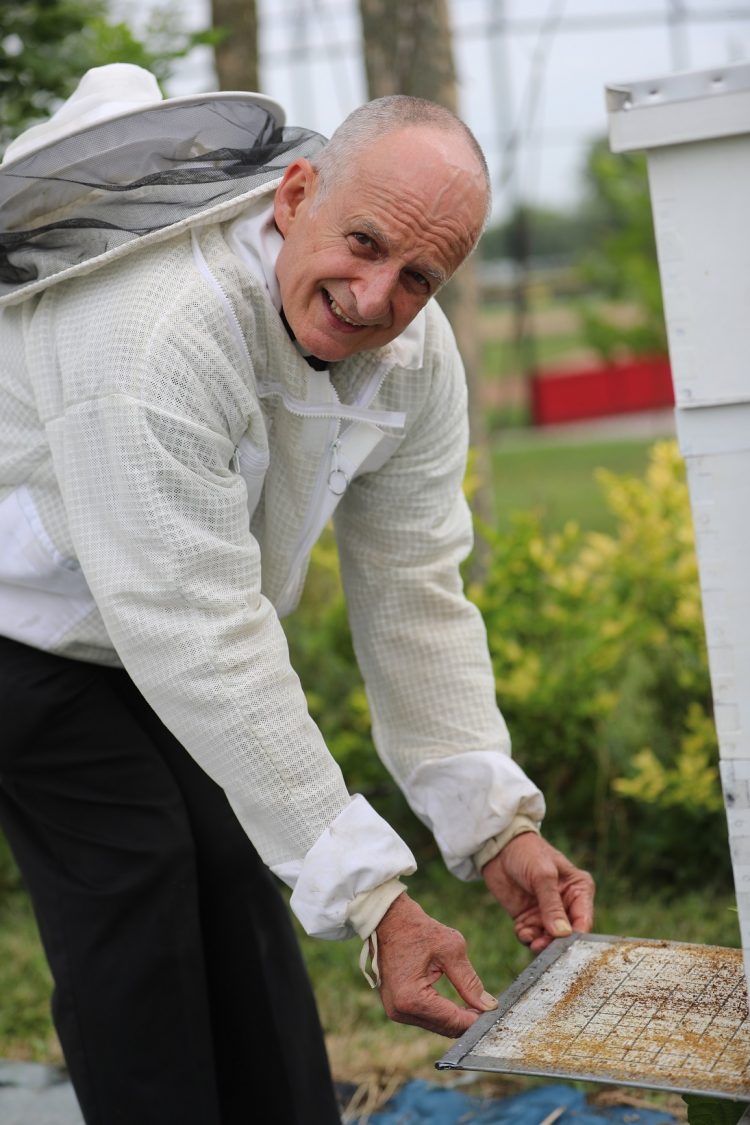 Syracuse’s monarch migration station, a tent-like closed structure, helps the insects reproduce so successive generations can continue the annual migration to California and Mexico. It’s his way of contributing to the health of our ecosystem.

“My brother and I are doing the same thing with honeybees,” he said. “We each have two hives.”

Syracuse learned about bees and monarch butterflies online, after hearing that the honeybee population was endangered. Once or twice each year he’ll harvest honey that will fill 25 one-pound jars. Every other week he looks in on the bees, but not before donning his white cotton and mesh beekeeper suit to protect him from stings.

Syracuse is not the only beekeeping member of the clergy. The Rev. Ryszard Biernat manages 100 hives in four Southtown locations. Biernat, who serves as assistant to Bishop Richard Malone, said tending to bees allows him to pray.

“I get restless very easily, I have Attention Deficit Hyperactivity Disorder (ADHD),” Biernat said. “I can’t sit and meditate or pray. I need busy work, so I found beekeeping.”

Syracuse’s attention to the environment fell in line with the philosophy of his order, he said. The friar speaks often about St. Francis, the order’s founder who died in 1226 and repeatedly proclaimed his love for creation.

Syracuse, who is 67, celebrated his 40th year this month with the Franciscan Friars of the United States. He first assignment in Brooklyn, at a Spanish-speaking parish, lasted 15 years. He spent 13 years at St. Casmir in Baltimore before coming home to Buffalo in 2010.

As a child on the West Side, Syracuse attended Annunciation Church, where he served as an altar boy. His desire to become a priest grew slowly, starting with a day trip to the Diocesan Preparatory Seminary on Dodge Street, a high school for boys who were considering priesthood.

“The only thing I remember from that day was that they served boiled hotdogs for lunch,” he wrote in a sermon he gave Aug. 5 during a Mass at St. Francis that celebrated his anniversary.

When it was time to attend high school, Syracuse chose the Dodge Street seminary, but was persuaded by his mother to join his brother Paul and two sisters at Cardinal O’Hara High School in the Town of Tonawanda. After graduation from high school, Syracuse had a steady girlfriend and was accepted at SUNY Albany where he planned to study math – but still he felt the tug of priesthood.

“My family was surprised about my decision, but eventually they were OK with it,” he wrote in the sermon.

Getting close to nature is not all that Syracuse does when he is away from the altar; as the pastor of St. Francis, he cares for a handful of senior friars, ages 62 to 85. He drives a Subaru left to him by one of the seniors “who went on to his reward,” he said. “I kind of inherited it.” On its backside, the Subaru wears a sticker urging people to “Try God.”

Syracuse uses his sense of humor in increments. Like his bumper sticker, his cell phone voice message carries light advice: “Don’t sweat the small stuff,” it says. “And remember, most of it is small stuff, anyways.”

Spoken like a man who spends a lot of time with bees.