"We don't go down very often," coach Mike Thoin said. "It's more of a reload than a rebuild."

This year's team is restocked with seven sophomores, the most Thoin has had in a decade, and even with an almost entirely new starting lineup, the Marauders' lack of experience has not lowered the state playoff standard "at all," the coach said.

"I'm really proud of the sophomores," senior captain Matthaeus Hendricks said. "I thought there were going to be some rocky moments but I certainly didn't expect us to be as good as we are now."

St. Joe's, the sixth-ranked large school in Western New York entering this week, took poll position in the MMAA regular season title race with a 2-0 win at No. 4 Canisius on Thursday and followed up with a 1-0 defeat of No. 9 Kenmore East on Saturday at Robert T. Scott Memorial Stadium.

The Marauders only losses have come against No. 1 large school Clarence and co-No. 1 small school East Aurora. They'll host unbeaten Lackawanna, the other top-ranked small school, next Saturday.

"We've only got a six-game league (schedule) now," Thoins said, "so we have to have good competition non-league-wise to get us ready for the playoffs."

Midfielder Evan Benz, who with Hendricks is one of two senior captains and returning second-team All-Catholic selections, was worried about the production and leadership void left by the last year's large senior class. But he gained confidence in his young teammates during offseason training.

"Twice a week we've been playing together during the summer and from the first couple weeks I knew we had talent and knew we were going to be pretty good," Benz said.

St. Joe's is a small team, with 17 of its 23 players under 6-foot. Hendricks is 6-1 — though a misprinted roster listed him at 6-10 for Saturday's game. His size and experience have helped the Marauders in a myriad of ways, as he's played defense, midfield and forward throughout the season.

"We have a smaller team and you would think playing against bigger kids it wouldn't be the way it is but we have been playing really well," said Hendricks, who scored the winner against Kenmore East for the second year in a row.

Thoin attributes the sustained success to the coaching his players receive at the freshman and JV level.

"Most of the coaches played for me," he said, "and they all know what I want to see." 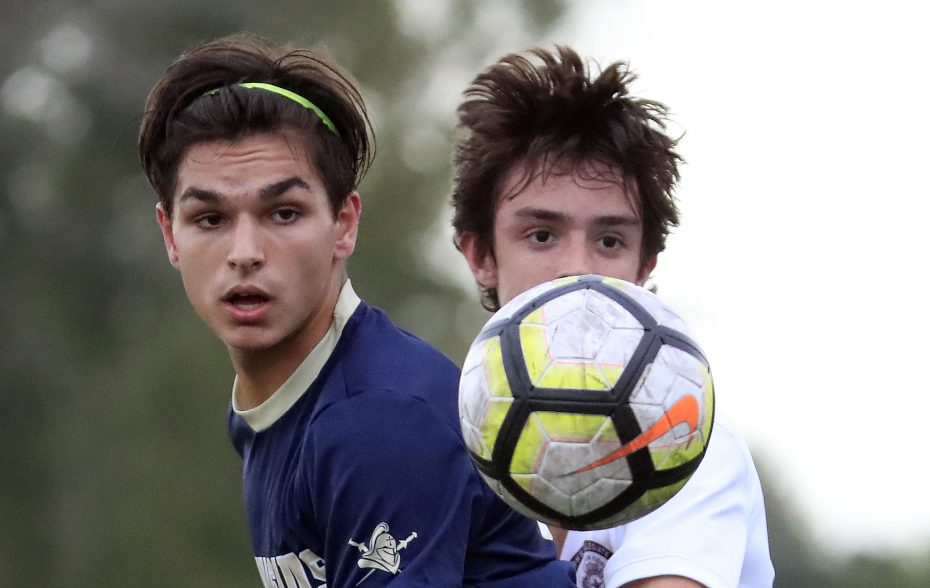 Carrying on the St. Joe's legacy "is an honor," said Joe Fronczak, who got called up as a sophomore last season and is now leading the team with 14 goals this year, including the first tally in the win over Canisius.

"A lot of good guys have played here," Fronczak added. "It was a really fun team to play on this year and I'm blessed to play with these guys this year. Playing up top with Benz and (sophomore) Max Kwitchoff setting me up all day long, it's been a lot of fun. And then to be able to score in my first game against Canisius on the varsity level, it's a big thing."

The win over rival Canisius gave St. Joe's an advantage it never held last season. The two teams tied in both of their regular season meetings and St. Joe's won the MMAA championship game 3-2 on penalty kicks. The meet again Oct. 11 at St. Joe's.

"That's always the game and always what we look forward to," Benz said. "As much as we love playing good non-league teams, our focus is always on Canisius, because at the end of the year we are going to see them twice and again in the playoffs, and that's what it's all about."

Benz was impressed that there was no letdown from the young St. Joe's players with less at stake against Kenmore East.

"It's hard to bring that same intensity that we have against Canisius to a non-league team but I'm really proud of the way we did that today," he said.

That wasn't the case in St. Joe's 4-1 loss to East Aurora, which accounted for half of the goals the Marauders have allowed this season.

"We played awful soccer against East Aurora," Thoin said. "They've got a real good team and they are a lot bigger than we are and we deserve what we got. But if we continue to learn when we do things like that, we are going to go far."