Some call it a "bad deal." Some see "enormous potential."

Initial reaction to a consultant's report about where to locate a new Buffalo convention center runs the gamut. Those in favor of a new or expanded convention center point to the Buffalo renaissance, the multimillion economic impact of convention business and the desire to capitalize on Buffalo's heightened status as a destination – and not just its proximity to Niagara Falls.

Those against the idea of a new convention center question the high potential cost to county taxpayers and expressed skepticism about the economic benefit of a dramatically expanded facility.

And while many remain undecided about where a new convention center should go if there is one, still others have strong preferences.

"It really is a difficult thing to insert into the fabric of a city just because the footprint of a convention center is so large," said Bradshaw Hovey, a research associate professor with the University at Buffalo School of Architecture and Planning.

Thomas Hazinski, managing director of HVS Convention, Sports and Entertainment, said the two potential convention center sites his company identified have pros and cons that make it difficult to pick a favorite.

The first option involves expanding the existing Buffalo Niagara Convention Center between Franklin Street and Delaware Avenue. This envisions renovating the existing facility, expanding it into what is now the rear part of the Statler building across the street and taking over the entire block north of the Statler. Sky bridges would connect the parcels.

The second option would be to build a new convention center from scratch on a much larger and unified parcel near Canalside. The convention center would be erected on what is now paved parking predominantly used by HSBC and The Buffalo News near KeyBank Center.

"One of the challenges in Buffalo is the shape of the blocks in the downtown area," Hazinski said. "They’re narrow. On most blocks, it’s difficult to fit a good functioning convention center, which is one of the problems with the existing building."

County Executive Mark Poloncarz has asked residents to weigh in on whether Erie County should remain in the convention business. That answer will drive all future discussion, he said. Residents are encouraged to offer their opinion online within 90 days.

"Without question, even without a study, you’d see our facility is antiquated," said Paul Stasiak, president of the Niagara Frontier Automobile Dealers Association, which organizes the annual Buffalo Auto Show. "It’s old. It needs more than a refresh."

Right now, the local auto show crams vehicles from every major car maker into 100,000 square-feet of convention center floor space when it could use twice that amount of room, he said. The limited space forces dealers to trim back the number of car models they can showcase and stifles the creativity of displays.

After reviewing the consultant recommendations with about a dozen other major event planners on Friday, Stasiak said they're all excited.

Bills and Sabres owners Kim and Terry Pegula also support a new convention center. They declined to weigh in on which site option they liked more, though the HSBC site would be a stone's throw from KeyBank Center, HarborCenter and their own headquarters.

"An up-to-date facility would allow our region to leverage its other assets and compete to host large-scale events that would have a significant impact on our local economy," according to a statement from Pegula Sports and Entertainment. "We have seen firsthand the positive effect that HarborCenter has had in drawing new business to Buffalo, and see enormous potential for a modern convention center to amplify the recent growth our city has seen."

Mark Croce, who owns the Statler building as well as the Curtiss Hotel downtown, said a new convention center is important no matter where it ends up going. But like many others who have staked millions of dollars in hotels and restaurants near the city center, Croce believes that the option to expand the convention center near its current location is better.

"You’ve got all this organic growth that is happening over the last 20 years," he said. "It’s hard to replicate that or duplicate that elsewhere."

A renovated and expanded Buffalo Niagara Convention Center footprint near Niagara Square would put the convention center within an easy walk of eight hotels, more than 50 bars and restaurants and numerous parking lots and garages, according to the HVS study. Croce, and others who own those establishments, have wasted no time in promoting this location as a way to strengthen the city core.

The Statler hotel site is located directly across from the convention center, giving Croce a strong, vested interest in this site location. The study calls for taking over the rear of the Statler building and repurposing it as an entry lobby and atrium for a new-and-improved convention center. That could make a big difference for the historic building, which was initially conceived as a convention hotel with 1,100 rooms.

"It would be the impetus to spark the redevelopment of the Statler, if it supports the convention center and vice versa," Croce said. "We look at the Statler as a community asset. That's why it's called Statler City."

Jay Manno owns Soho and two other restaurants and bars at the intersection of Chippewa and Franklin streets, two blocks from the current convention center. He considers himself to be part of a walkable convention center district that would only get stronger with an expanded convention center footprint.

"We’re a city moving forwards, not backward," he said.

He added that while he loves Canalside and is a Sabres season ticket holder, the HSBC site location adjacent to Canalside would be bone chilling in winter.

Those who see the HSBC site, near Canalside and KeyBank Center, as an ideal location point to several positives. A new facility built on undeveloped land would be cheaper, larger and could be built to ideal specifications with room to expand. It would not require the acquisition and demolition of any existing buildings and would be located in an "up-and-coming" location that could spur interest or private developers.

Hovey, of UB, noted that if this location were chosen, then it would be possible to eventually restore more the original radial street pattern of Buffalo with the restoration of Genesee Street.

HSBC spokesman Robert Sherman said the company is committed to Buffalo but needs to understand more about the HSBC site recommendation before contributing to the convention center discussion.

Preservationist Tim Tielman, head of the Campaign for Greater Buffalo History, Architecture & Culture, said this site would be less harmful than the expanded convention center recommendation. But he also thinks local residents are being presented with a false choice. 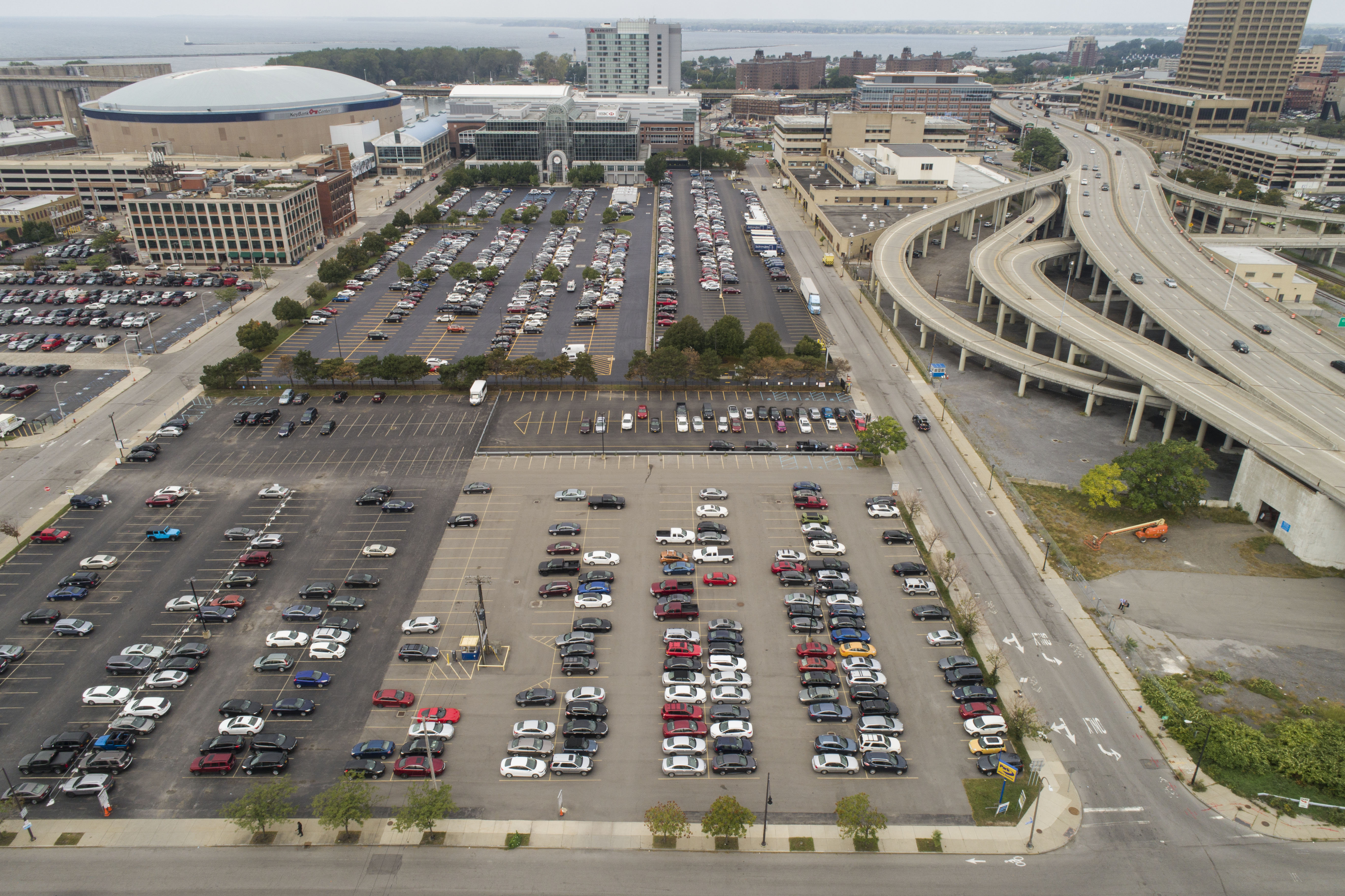 "I think it’s a bad idea to talk about expanding a convention center or building a new one at the scale that they’re talking about," he said. "Simply building a bigger one is not going to solve any problems."

Weather perceptions of Buffalo affect peak convention season, as does limited direct flights to the city, he said. Moreover, he argued, despite the millions in economic impact created by a new convention center, that economic gain is offset by the public subsidy needed to build one.

"Buffalo has to spend every dollar wisely, smartly," he said. Referring to the estimated $300 million to $400 million price tag for a new convention center, he added, "That’s a tremendous amount of money, and by hook or crook, something is going to come out of the pockets of county taxpayers."

Hovey agreed that businesses that promote and build convention centers can make exaggerated economic development promises. That concern led to several costly studies 20 years ago, he said, the last time the county launched a campaign for the new Buffalo convention center.

But he also said the convention economy in Buffalo is a real one.

"It’s an interesting debate the community should have," he said.

Key players have been notably silent or said little in reaction to the convention center report.

While local leaders are hopeful the state would contribute money toward a new convention center, as it has in other cities, Howard Zemsky, head of Empire State Development, declined to offer any opinion of the convention center study this past week.

Buffalo Mayor Byron Brown said he supports the general concept of a better convention center but wants to wait for more public feedback and community discussion on the matter.

“I’m pleased that this study starts by asking if a modern convention center has a place in the new Buffalo economy, and I’m extremely interested to see the economic analysis of the two proposed sights as well as to hear community input on what everyone believes is best for our community," he said in a statement.

Erie County legislators, who would ultimately be asked to support or deny the allocation of county money toward a new convention center, offered mixed reactions. Chairman Peter Savage said he agrees that the current convention center doesn't meet the community's needs and supports the consultant's report as the first step in the process toward finding a solution.

Joseph Lorigo, head of the Republican-supported minority caucus, meanwhile pointed out that the Legislature was correct to deny the allocation of additional funding to expand the scope of the convention center study. He suggested the question of a new convention center should go to a public referendum next year, though Poloncarz later said that is not allowed under state law.

"There's not enough time in 90 days for people to have a well thought-out reaction," Lorigo said. "I think we need more information. That's still a lot of money. Taxpayers should have a say. We need to know if the economic impact of a new convention center is worth the initial cost."