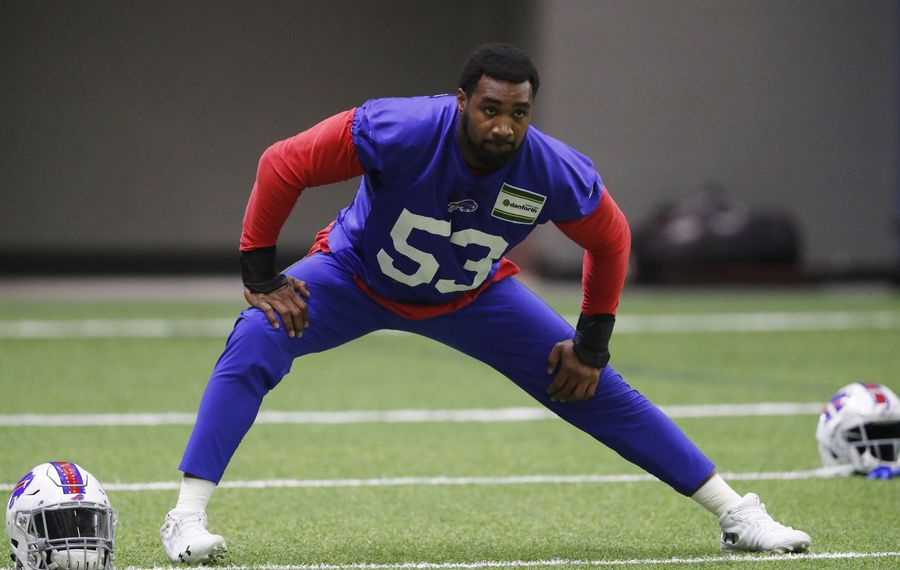 Nate Orchard's struggle was broadcast for all to see.

The new Buffalo Bills' defensive end had a starring role in this season of the HBO series "Hard Knocks," which followed the Cleveland Browns through training camp. Orchard, a former second-round pick of the Browns, was a main focus of the reality show as he struggled to earn a roster spot. That struggle, and what it meant for his family — wife Maegan and their two young daughters — was documented in painstaking detail.

"It was just a ton of cameras everywhere you go," Orchard said of the Hard Knocks' experience. "So you really had to get used to that. Aside from that, once you put that in the background and not notice it, you just really had to focus on what you were doing. We were mic'ed up for games, too, so there was a distraction, but you've just got to be able to put that aside and continue to work on your craft and what you do."

Orchard looked like he might have earned a spot on the Browns' 53-man roster when he returned an interception 64 yards for a touchdown in the preseason finale against Detroit. In the end, though, it wasn't enough, and he was released a couple days later.

"It's a wake-up call," Orchard said. "At the end of the day, this is a business. That's a business decision they made on their end. It's something that in some ways is out of your control. All you can do is each day put your best foot forward."

Orchard wasn't out of work long. He came to Buffalo for a tryout right after being let go in Cleveland. When Shaq Lawson suffered a hamstring injury against Baltimore in the season opener, the Bills needed a fourth defensive end, leading to Orchard getting the call.

"It's a great opportunity," he said. "I appreciate Brandon Beane and coach McDermott believing in me, bringing me in here to really help this team do what they need to do. Just to be here is a blessing. To be out last week and not on a team wasn't fun at all, but it's a definitely a learning experience. To be here now, I'm truly honored."

Orchard played just five defensive snaps against the Chargers in Week 2, not a total surprise given he had just days to get the scheme down. With some additional prep time this week, he could see more playing time Sunday against the Minnesota Vikings in U.S. Bank Stadium.

"He's had a good week," McDermott said. "He continues to get the system down. I do like his energy."

That's a word Orchard uses frequently to describe himself.

"Of course, pass rush is one thing, but I just bring energy," he said. "Energy on the sideline, energy on the field. I make sure guys know and feel my presence."

The Bills' pass rush could use some juice. That's been Orchard's calling card since his college days at Utah. He had 18.5 sacks as a senior in 2014, tying for the national lead and setting a school record.

"Ever since his freshman year, he just kept getting and better," said defensive tackle Star Lotulelei, a former college teammate with the Utes. "An 18-sack season, that speaks for itself. … He's a hell of a player. He gives great effort. Selfless guy.

"This defense is real similar to what we ran at Utah, so he's going to be able to put his hand in ground and just go. He was playing a little bit of stand up in Cleveland, having to drop, kind of more like a linebacker. Here, we've got him back to where he's comfortable. When he catches up here, it's going to be good."

Orchard's monster senior season elevated him to the second round, but he never quite lived up to that draft status with the Browns. In 34 games, he had just five sacks. The story in Cleveland is one of a failed draft pick, but Orchard tries not to concern himself with that.

"I'm not one to analyze that kind of stuff. At the end of the day, it's just give me an opportunity — that's all I wanted," he said. "I was so happy that I got drafted in the second round. It was great, but every day you've got to go out and prove yourself. For me, being in Cleveland the last three years, three defensive schemes, it was a lot to adjust to. Each and every year was something new. But to be here, everything happens for a reason and it's an opportunity for me to go out and prove myself again."

After one of Orchard's first practices, he stretched on the field with Lotulelei long after the workout concluded.

"It's the nature of the league. You're here one day and you can be somewhere else the next day," Lotulelei said. "It always helps when you've got a familiar face somewhere. We're both from Utah, we went to high school in Utah. … We've been close ever since college, so it's good to have him here."

Orchard actually isn't from Utah, but it's home now. The story of how he got there is the stuff of movies. Born Nathaniel Fakahafua in Los Angeles, he moved to Salt Lake City at 11 years old with his older brother, Max. The boys' mother, Ana, would send them money, but that eventually ran out. Orchard was faced with a decision —go back to California or find somewhere else to live.

That prompted the biggest decision he ever made. Orchard was close with a teammate on his AAU basketball team, Sam. Sam's dad, Dave, was the coach. From time to time, he or his wife, Katherine, would give Nate a ride to and from practice. The Orchards had previously had kids who came from difficult situations, so when a 12-year-old Nate knocked on their door and asked if he could stay, they welcomed him in.

"They took in a kid off the streets at 12 years old and they stuck with me through thick and thin," Nate said. "I was desperate. This family had shown nothing but love and compassion toward me. I knew I could trust him, so I found my way up to their door.

"I gave them grief over the years, but they never gave up on me. They're the reason why I'm here today."

Life in the Orchard household wasn't easy. Nate missed his mother, and the life that he used to live. That led to him running away on more than one occasion.

"He came from an environment where he had no boundaries or new rules," Dave Orchard said. "When he moved in with us, he had curfews and rules and structure. Before that, he didn't have any of that. He ran away a lot, because he wasn't used to that structure and discipline.

The Orchards put an emphasis on education. That was a huge change for Nate, who could barely read in the seventh grade, according to Dave.

"He bounced from L.A. to Hawaii to Salt Lake and lived where he could — survived basically," Dave said. We really pushed how important education is."

Nate took those lessons to heart. He left Highland High School with a 4.0 grade-point average, then graduated from Utah with a degree in economics. He plans to attend law school when his playing days are done.

"That's pretty amazing from a kid who couldn't really read in the seventh grade," Dave said. "He's always risen to the top, whether it was athletically or academically or as a leader. He just needed the opportunity, which is why this chance he's got in Buffalo is a great thing."

"He's one of our kids. We have six, and he's one of the six," Dave Orchard said. "He's adopted, but he's just like our own blood."

With the structure provided by the Orchard family, Nate blossomed on the playing field — and court. He was the Utah 4A state MVP as a wide receiver in 2010, leading his team to a state championship. He was also an all-state basketball player.

"He was a skinny, 6-foot-tall kid," Dave Orchard said. "You'd never imagine him being a defensive end. He had a big heart, though, and there's always been something special about him."

The Buffalo Bills have taken 11 sacks so far this season, so it might come as a surprise that they have, according to analytics website Pro Football Focus, the best pass-blocking guard in the NFL through the first two weeks.

Left guard Vlad Ducasse holds that distinction, with an overall grade of 91.3.

Ducasse, 30, is in the second year of a three-year contract. He moved over to left guard following the retirement of Richie Incognito.

- Bills linebacker Ramon Humber grew up in Brooklyn Park, Minn., which is just 12 miles from U.S. Bank Stadium. Humber, a 10th-year veteran, will be playing for just the second time as a pro in Minnesota. Just how much he plays will be interesting to watch after he rotated in at times for starter Matt Milano in Week 2.

"Just looking at some things," is how coach Sean McDermott described that decision. "Sometimes, it benefits a young player to be able to watch a series or two, get next to his coach on the sideline and learn a little bit of watching how they're attacking us offensively. Just being able to do that is important. We also have a lot of confidence in Ramon Humber, as well."