He has spent the past 12 working as an NFL television analyst for CBS.

And pretty much every year since Cowher began talking about the game rather than coaching it, his name has always gotten at least a cursory mention for a possible return to the sideline.

That has happened more than once in Buffalo, where Cowher sightings were a virtual given whenever the Bills were in the market for a new coach. According to Cowher, there was, in fact, one year when such talk actually had some merit.

"When Terry (Pegula) bought the team (in 2014), he called just inquiring if I was interested at all in coming back to the job," Cowher said. "I said, 'No, I'm good. But if there's anything I can do to help ...' So we talked. We had some conversations back and forth about the NFL, about people you talk to as you come into it."

Since Doug Marrone's resignation after the 2014 season, Terry and Kim Pegula — with whom Cowher said he has developed a friendship formed in part by the Pennsylvania roots he shares with Terry — have hired two coaches: Rex Ryan and Sean McDermott.

"I really like the makeup right now," Cowher said.

At 61, he is even happier about his professional and personal life. After six seasons as a player with the Philadelphia Eagles and Cleveland Browns, Cowher has had an accomplished coaching career, twice leading the Steelers to the Super Bowl and winning once (XL, against the Seattle Seahawks, after the 2005 season). He received coach-of-the-year honors after the 1992 season, his first at the helm of the Steelers, and after the 2004 campaign. He had a career record of 161-99-1.

For this week's edition of "One-on-One Coverage," Cowher sat down with The Buffalo News during a recent media event at CBS headquarters. Among the topics covered were dealing with the many times he has been the subject of speculation for a return to coaching, his life away from the sideline, his thoughts on McDermott and memories of facing the Bills.

Buffalo News: How have you handled having your name come up so often for head-coach openings in the NFL?

Bill Cowher: No. 1, it's very flattering to be having the inquiries that have taken place down through the years. That's been very flattering and very humbling. At the same time, if people would look back on my career and understand that it was (after) 15 years (as a head coach) when I stepped down. And I didn't step down and do it as a spontaneous move. I had given it a lot of thought. I was ready for the next challenge in my life. And the opportunity I got with CBS provided me that.

I always just think life is about the ability to transition from one phase of your life to another. I continue to try to get better at what I'm doing. I have a great platform to be able to still be a part of the game, but the one thing I learned to experience when I stepped down is that there is a life outside of football. When you're an NFL head coach, your life is centered around football. Now, it's compartmentalized. I now have a season and I have an offseason. During the season, I am right in it. I have the same kind of commitment to the game, watching tape, preparing for our show, giving my opinions and insights, and trying to talk to people around the league.

But now I have an offseason. After those five months — September, October, November, December, January and then the first week of February as we are this year (with CBS broadcasting the Super Bowl) — I am now able to do things I never could do before.

BC: Travel, speak, spend time with my kids. I'm now four years into a marriage with best friend, soul mate. I went through a very tough period of time when I lost my first wife (Kaye, a former women's professional basketball player who died of skin cancer in 2010 at age 54). But I've now moved myself into New York City from Raleigh, N.C. I'm a New Yorker. I never thought I'd say that. If you told me 12 years ago, when I stepped down from Pittsburgh that I was going to become a New Yorker, I would have said, "No way." I enjoyed my time in Raleigh, but I'm transitioning now to becoming a full-time New Yorker.

BN: Still, doesn't having your name mentioned in connection with various coaching jobs give you even a slight urge to get back into it?

BC: Again, it's flattering, but I know what it entails. Going back to being a head coach entails a full-time commitment to that job and I would not go into it for any amount of money and do it halfway. It would be a total commitment, not part-time. What I have now is a balance in life I never had before, and I really am in a good place.

BN: So are you saying that coaching in the NFL again completely out of the question?

BC: I never say never, because I never shut a door I don't have to. But I'd be hard-pressed to think that I would be because I'm in a very good place right now. I feel like football is going to be in my blood somehow in some way. So I don't know what would happen (if the opportunity came up again). I always try to stay in football in some shape or form and I love the platform I have at CBS, I love working here, so I don't see (returning to coaching) any time in the near future.

BN: What's the background of your relationship with Terry and Kim Pegula?

BC: I had spoken at the (annual) Allen & Company (media and finance) Conference in Sun Valley, Idaho. I spoke there five years ago on a panel, and the Pegulas came out. They had the energy business and there are other (team owners) out there. Kim got to know my wife, Veronica, who is a singer from Nashville. And the Pegulas have their (Black River Entertainment record) label in Nashville. So we've really gotten to know each other very well. We've sat down many a time at the the Allen & Company Conference. We'll have a glass of wine, we'll talk about sports, we'll talk about a lot of the events that take place at the conference, which is a fascinating conference.

And just down through the years, I've just gotten to know them very well and they're just good people, committed to the Sabres, committed to the Bills. My son-in-law played in the NHL, Kevin Westgarth (a right wing for the Los Angeles Kings, Carolina Hurricanes and Calgary Flames), and now works in the league office with (deputy commissioner and chief legal officer) Bill Daly. So there's a hockey and football background that's very similar to what they have. I give my opinions on things.

BN: You and Sean McDermott have similar backgrounds, both becoming head coaches after serving as defensive coordinators, you with Kansas City and Sean with Carolina. What are your impressions of him?

BC: I love Sean. I came up and did an interview with him last year, right before their playoff game, and I just like everything he stands for. He's a no-nonsense guy, he holds people accountable, wants you to play hard. He'll make the tough decisions. I just think there's an energy and a truthfulness about him that reminds me a lot of myself when I was young, you know? What you see is what you get.

And he wants to surround himself with those same type of people who are as committed to the game and play the game hard, play the game right. (His philosophy is), "It's not about any one individual. If we do this thing collectively, we can get it done. It just takes one guy to screw it up." I just love his approach to the game, his vibrancy. You get the right pieces around him ... I think he's a good leader of men.

BN: What was the biggest challenge you remember as a first-time head coach and the lesson it taught you that could serve as helpful advice to Sean and others who have followed in your footsteps?

BC: I think in-game management. I think when you're a coordinator and you've never been a head coach before, you're talking about offense, defense, special teams, all the adjustments that are needed to be made during the course of a game because you're not going to be put into every (possible) situation. So every year will be a new situation, so you got a new learning experience. And so you gather that experience and on Game Day, the longer you're in the league, you become more comfortable with it, more efficient with it and just a better feel for the game. It just takes experience to get that feel.

BN: You've always had an affinity for Buffalo and the Bills, haven't you?

BC: I just love the Buffalo market. Say what you want about their fans, it'll be December and they've been out of the playoffs for a month. But if there's a December game with snow, there's still going to be 72,000 people in those stands. One of the most passionate, loyal groups of fans in the National Football League, bar none. I came from a pretty good base in Pittsburgh. Buffalo's pretty good, too.

I've got to tell you, I have so much respect for them. It was hard at times in those games we had up there with Jim Kelly and the K-Gun and Thurman (Thomas) and James (Lofton) and Andre Reed, (Steve) Tasker, Bruce Smith. Our first playoff loss (after the '92 season) was to the Buffalo Bills; they went to the Super Bowl that year. So much history with the Buffalo Bills. To go to four Super Bowls in four years. Don't talk about the losses. Try getting there four straight years. No one's done it (since). 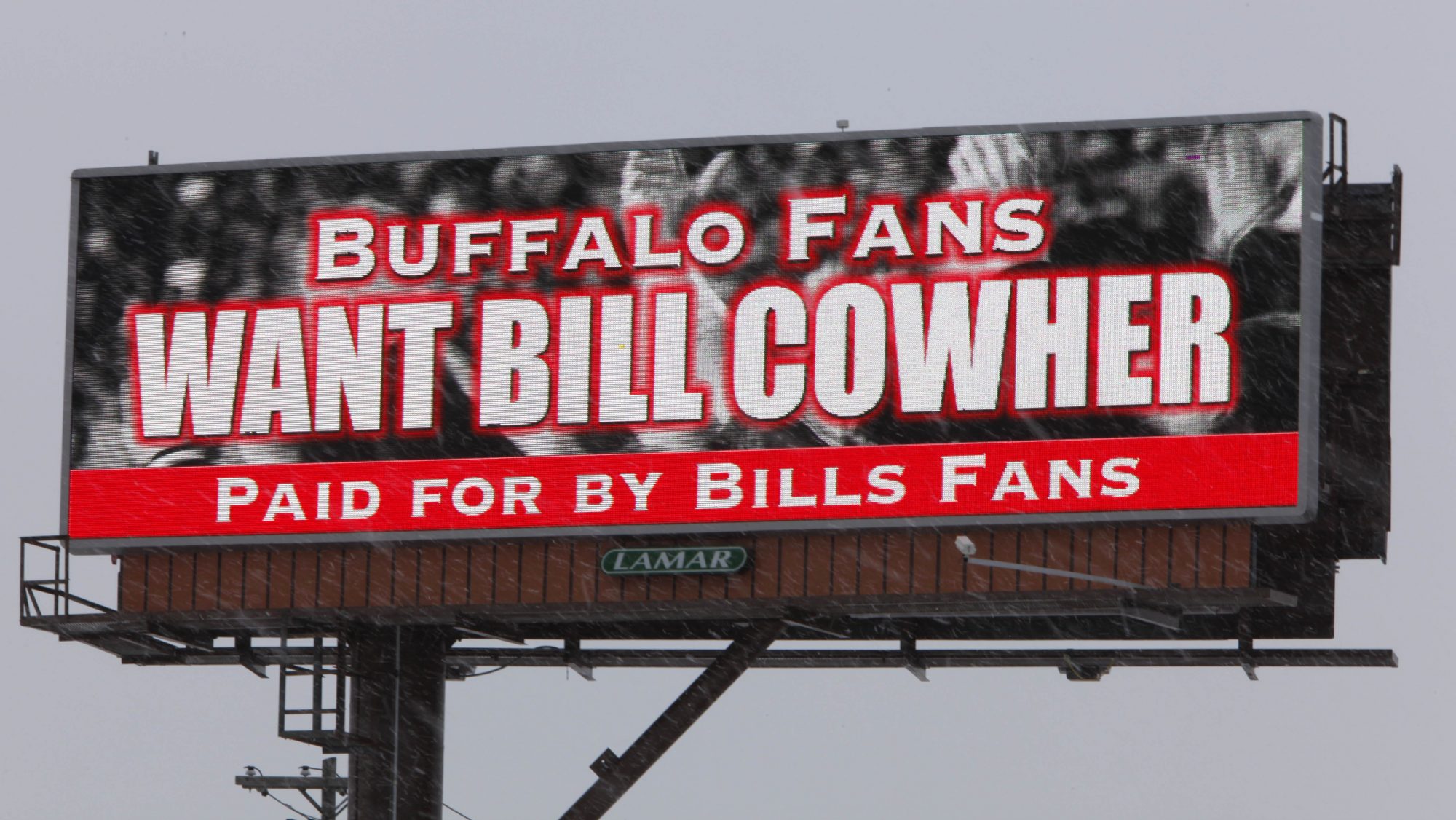 In 2010, Bills fans took out a billboard on the Niagara Thruway urging the team to hire Bill Cowher as head coach. (Derek Gee/News file photo)