The developers behind the reuse of the former Women and Children's Hospital of Buffalo complex in the Elmwood Village are planning to include some sky-high condos — with sky-high prices.

Under detailed plans laid out to a real estate group by Nick Sinatra and William Paladino on Thursday, the top three floors of the main Variety, Tanner and Alfieri buildings will feature 27 luxury condominiums of varying sizes, largely using the existing layout of the historic structures.

The expected asking price: Up to $1 million for the priciest units.

Each condo will have "higher-end finishes and roominess, with great views," and buyers will be able to upgrade or add additional design elements "at their cost," Paladino said. "We have had a lot of interest to date."

That's in addition to a separate group of for-sale town houses, as well as a range of market-rate, affordable and senior apartments for rent, all spread out over the 8-acre former hospital campus that is being transformed into Elmwood Crossing.

The developers are betting they can sell the condos and town homes for top dollar, counting on the location, amenities and views of the surrounding neighborhood.

Paladino's Ellicott Development Co. and Sinatra & Co. Real Estate are planning a $100 million reuse of the former children's hospital, which moved to the Buffalo Niagara Medical Campus last fall after nearly a century in the Elmwood Village. Sinatra and Ellicott bought the property right after the move, assuming all environmental responsibility, and have been working with community groups on their multiphase plans for the new Elmwood Crossing ever since.

Plans call for creating what Sinatra called a "mixed-use, live-work-play community" and "cool, unique village" that would be mostly residential in nature, while bridging the Elmwood Village and Allentown neighborhoods.

"We’re so excited about this project," Sinatra said. "It’s very rare that you get an opportunity in this business to redevelop a neighborhood. It’s almost 9 acres in the heart of our city. We may never see this again in our careers where we have an opportunity to make an impact like this."

Besides the condos, the developers are proposing about 220 apartments, 20 townhouses, an urban grocery, boutique shops, office space and an EduKids daycare center. Most of the housing will be market-rate or luxury, but the developers have committed to affordable housing for a portion of it.

The commercial and retail component is particularly important, Sinatra said, because it can affect how well everything else succeeds. All of it relies on use of the 600-space Gallagher Ramp, which the developers are negotiating to buy from the city.

"If we have the right retail, it’ll attract the right residential price points, and the whole project just works," Sinatra said.

He also rejected what he called an incorrect narrative that Elmwood is struggling. "That is absolutely inaccurate," he said. "There are tenants that still believe in Elmwood. I still think it's the greatest street in our city, and it's going to be bigger and better than ever." 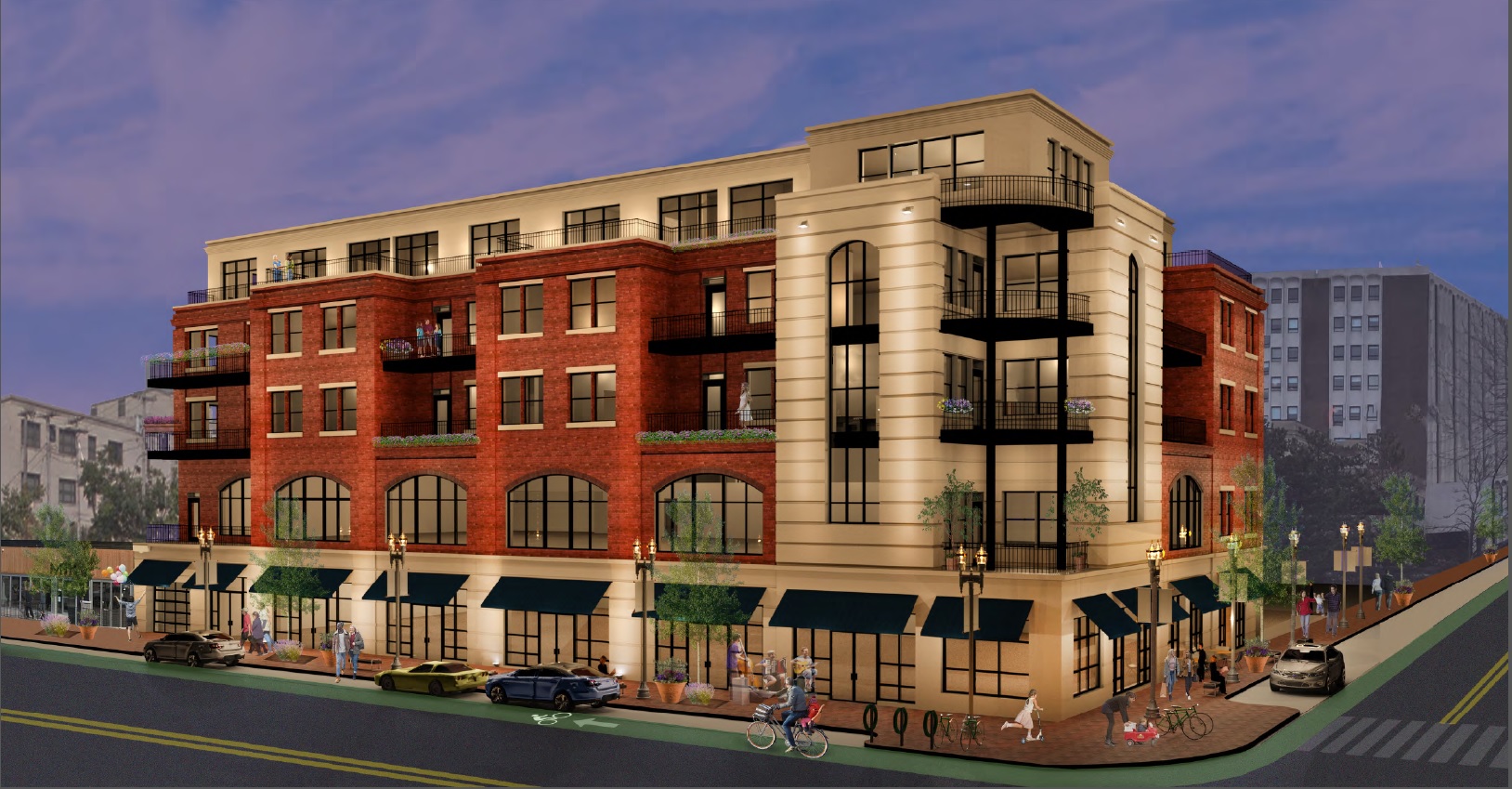 The revised Elmwood Crossing project, with five floors, was approved by the Buffalo Planning Board.

The overall project is still subject to an environmental impact study, which is underway, as well as a municipal review as a "planned unit development," in which the developers, community and city negotiate a zoning agreement specific to the site. Final approval is not expected until the spring, Sinatra said.

Most of the existing hospital buildings, including the Variety and Tanner towers, would be retained and reused, while two buildings would be expanded.

Behind the towers, Paladino said, the developers plan to take down a "very small portion" of the structure next to the boiler room along Hodge Street to create a "minor parking level" for the owners of the most-expensive condos.

One house on Hodge will be demolished to make room for a single curving pocket park on the east side of the main hospital buildings, consolidating other green space into one area.

"That’s something the neighborhood community groups really pressed us on, to think about how we could put more green space there," Sinatra said. Otherwise, though, "we're not looking to take any buildings down."

The project has been criticized by some in the neighborhood for its slow progress. But Paladino said work is ongoing in all phases, even if it's not visible on the outside. He said the developers have explored more than eight different exterior designs for the towers, by multiple firms, and are only now narrowing it down to one version by Kideney Architects. Interior abatement and demolition should start by the spring, but the tower phase will likely take two to three years before it's done.

The first phase of the project is underway, with brownfield remediation and site work at the corner of Elmwood Avenue and Bryant Street. That's where the developers plan to construct a five-story building on a former parking lot, while incorporating most of the MTK restaurant building next door.

The new building will feature several ground-floor retail spaces, one floor of office space, and 22 apartments on the upper three floors. The developers have "a couple of retailers we're talking to now," and "hope to solidify" leases in a month or two, Paladino said.

Construction should begin in about six weeks. "By this time next year, maybe a little later, we'll start occupying the building," Paladino said.

In the second phase, Ellicott and Sinatra will expand the two-story former Hodge Pediatrics building into an EduKids daycare, operated by Nancy Ware. The daycare is slated to open by September 2019.

Phase 3 calls for an urban grocery on West Utica Street, reusing a former bank and Eckerd pharmacy and a parking lot and expanding it into a four-story building. Besides a 25,000- to 35,000-square-foot store, the new building would also include other boutique retail space and 50 apartments.

Sinatra said the developers are "talking to a number of grocery stores" that they would not identify, although Joe Dash confirmed that his Dash's Market is one of them.

Next door on West Utica, the developers will work with Essex Homes to build 20 three-story townhouses of 2,500 square feet each on another empty parking lot, with rear garages and private patios.

In the fifth phase, the developers will use historic and low-income housing tax credits to convert the existing low-rise Annex, MH and D buildings into market-rate and affordable apartments.

The facades would be cleaned up in conjunction with the State Historic Preservation Office, but plans otherwise call for keeping the layout as is.

Finally, the three tower buildings would become fully mixed-use, with the condos on the top three floors, followed by a proposed wellness center. There's also plans for a boutique hotel, a work-sharing or community space, restaurants and senior apartments, Paladino said.

The facade of Tanner would see only limited changes to preserve the historic character and qualify for tax credits, but the Variety and Alfiero buildings would undergo "significant reconstruction," according to the developers' presentation.