Four seasons at one program is the magic number for a college soccer coach. It means four recruiting classes have come into the team, suffered through the same preseasons and, in most cases, grappled with the same concepts integral to what it means to wear the jersey.

For Todd Clark, now in his fourth year at the helm of the Canisius Griffs women's soccer team, the fruits of smartly building a program are being harvested. The Griffs seem to genuinely get along and play for each other, willing to step up when teammates falter; there's a healthy balance of support and competition.

Here are five things to know about the Griffs as they enter into the slog of Metro Atlantic Athletic Conference play.

Eyes often glaze over when sports articles spout platitudes about a healthy culture, team unity and so on. Fortunately, the Griffs have added a little spice to the idea, in the unexpected form of the Goddess of Pop.

Part of Clark's first recruiting class, Canisius senior center back Emily Czechowski described the philosophy around which the Griffs are built.

"We created a culture called CHER, which stands for compete, honesty, ethic and role," the Lancaster High School alum explained. "Over the past few years, we've really developed it and made sure when people come in, they understand our culture. Not only are [they] able to recite what we say, but [they'll see us] live up to it on the field and through our play."

Along with close friend and classmate Melanie Linsmair, Czechowski carries plenty of responsibility on and off the pitch; the veterans hold themselves and their teammates accountable to meeting the standards set by the program. It sounds cliche, but others - such as flourishing junior forward Maddie Beaulieu - notice the impact of the culture.

"Our chemistry on but especially ... off the field," Beaulieu said, "with how people interact and how we involve each other with upperclassmen and underclassmen, all communicating and being together, all helps produce something great on the field."

The togetherness is evident in the team's results. Every single game Canisius (3-3-1) has played has been decided by one goal or ended in a draw. In other words, the Griffs are tough to beat.

"The goofy thing is, maybe a couple years ago I would have been worried we were going to unravel," Clark admitted after the Griffs fell to UB, 2-1, in a non-conference match. "[Now] I'm not worried that we're going to unravel. It's without a doubt the most enjoyable group I've ever worked with."

It wouldn't be a stretch to say Beaulieu was one of the least likely breakout goal scorers for Canisius heading into this season. In her two seasons with the Griffs, spanning 35 matches, the Vestal native had scored just twice - both as a sophomore - while playing virtually every position aside from goalkeeper. She recounts her footballing journey in a bit of detail, below.

"I came [to Canisius] right off an ACL injury, so I was really nervous coming in freshman year," Beaulieu remembers. "I didn't even know if I was going to play. I started as a left back my whole freshman season; I didn't play anywhere else. Sophomore year I played every position - I played all over the park. Last year was more of a 'who needs to be where at what time' [situation]; I'm pretty versatile and I don't really care where I play as long as I'm being productive and helpful.

"This year, because TC [Todd Clark] was able to bring in some really good girls in the back and the midfield, he was able to push me up more, which has allowed me to be productive up top and get some goals for the team."

The goals have come at an impressive rate: Beaulieu has potted half of the team's eight goals, showing good instincts in the 18-yard box that usually come from experience as a center forward, something the junior lacks. Her four goals have come on just nine shots, eight of which she's put on target.

"I don't necessarily consider myself the goal scorer. I've scored throughout my career, but I don't see it as me having that one specific job," Beaulieu said, humbly. "Versatility gives me that ability to do that job amongst a bunch of other things to help the team, even being up top as a forward."

There's no question that the Griffs are better off with a goal-scorer-by-committee approach; Beaulieu's threat won't be lost on MAAC foes who spend a little more time scouting. But Clark and his staff can be encouraged that attention paid to the team's leading scorer may create opportunities for a supporting cast with some potential.

If you took stock of the Canisius Griffs women's team after Gretta Dry's freshman year, the Lockport graduate looked destined to be the team's star. Eight goals - four game-winners - and four assists resulted in her selection to the conference all-rookie team. Her quickness was a weapon in the attacking third, as help defenders shaded in her direction as the goals flew in.

Fast forward to her junior year, and Dry is an important bench player - but that can't be considered anything other than a personal disappointment.

"Gretta Dry is a good example of a kid, unless she's the strangest kid I've ever met in my entire life, is not happy to be a bench player right now," Clark admitted. "But she's going on and busting her butt and we're not seeing friction. Same with Shauna Lee and Hannah Morpurgo and Sydney [Livermore], they're all kind of altering back and forth."

The situation is a reminder that roles cannot be taken from one year to another, but also that there are myriad ways to help a team - and some of them involve a blow to the ego. 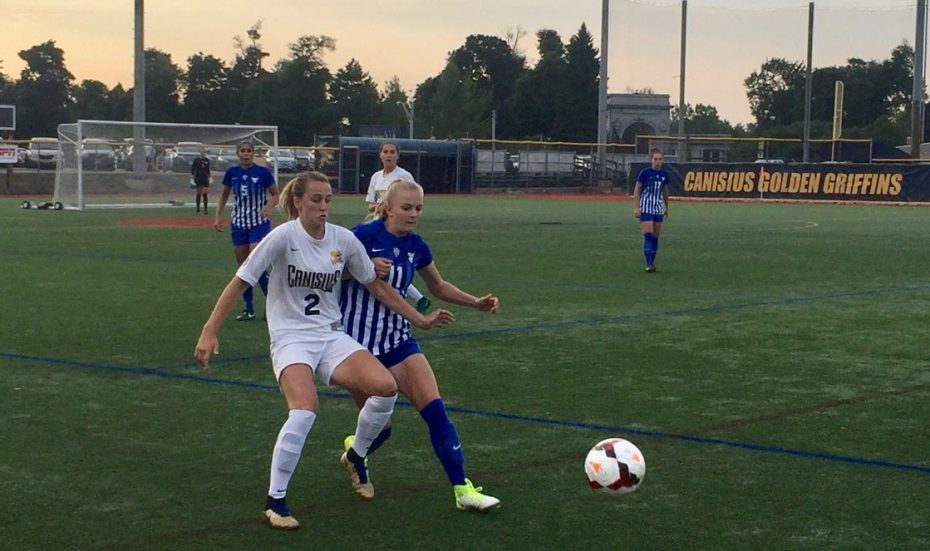 Gretta Dry, in white, has come off the bench so far this season. (Ben Tsujimoto/News file photo)

Recognizing the growth of women's soccer

Taking in a University at Buffalo vs. Canisius match is fascinating from the perspective of what it says about Buffalo women's soccer. Does the Western New York soccer community care about college soccer? How much further ahead are the women compared to the men when it comes to supporting the sport's growth?

When the clash happened Sept. 6 at UB Stadium, roughly 300 local soccer fans turned out to witness the action. The turnout wasn't lost on the game's participants, who were eager to discuss the topic after the match.

"It's definitely exciting to look up, see friends and family and even players and parents that we don't see that often coming and supporting the teams," Linsmair said. "Parents far away, traveling to watch."

"Even parents and players from our club teams who don't play in college but who we've kept in touch with over the years, coming to the games," Czechowski chimed in.

A 1-0 loss on the road to St. Peter's, win-less entering the match and picked to finish in the MAAC's cellar, was the worst possible way to start conference play. More ominous? Clark's post-game comments: "The focus and effort just wasn't there for us today." Yikes.

The side's first home conference match arrives at 1 p.m. Sept. 22 against Manhattan, picked to finish fourth out of 11. Canisius was projected ninth. It will be Senior Day at Demske, and Emily Kuta and Paige Buscaglia will join Linsmair and Czechowski as the Griffs recognized.

As far as season goals are concerned, the focus shifts mostly to the present.

"We want to make playoffs, and obviously we want to win MAACs, but it's really important for us to take it game-by-game," Czechowski said. "We can't look past any game."

If the loss to the Peacocks is any indication, she's absolutely right. But the Griffs' togetherness and refined purpose nevertheless makes them a formidable, tough-to-beat opponent for MAAC foes.

*Canisius keeper Alana Rossi was terrific in keeping the Griffs close in an eventual loss to UB. She was aggressive, sure-handed and remained focus through the Bulls' waves of pressure. The decisive goal allowed against the Peacocks, however, is one she'll want back. How the junior responds will be telling; the challenge for goalkeepers of any age is to have a short memory.

*Outside back Maggie Canitia was someone we considered to be a rising star in women's soccer last year, but her contributions were less evident in the match against UB. The opportunity has been there - the Ohio native has started every match and averaged 80 minutes per contest, so we'll see if she can replicate her outstanding freshman campaign.

*Tonawanda High School and WNY Flash stalwart Hope Balling landed with the Griffs, where she's immediately carved out a starting role on the wing. Her pace and athleticism have proven valuable, and the reigning All-Western New York selection has been productive, leading the team in assists, with three.

*One to watch: Swedish freshman center back Hanna Friberg offers the toughness necessary for the position, and the chance to play alongside someone as experienced as Czechowski should hasten her development. There will be growing pains, of course, but it wouldn't be shocking to see Friberg among the MAAC's top pure defenders by 2021.

*An issue that plagues most teams: secondary scoring. Senior Buscaglia, already a pick for MAAC Offensive Player of the Week, started hot but has cooled off a bit. Shauna Lee, who oozed potential and scored the winner to beat UB last year, has just one start to her name and averages less than 40 minutes per match.