Jordan and Johnny Parks' recollection of the severity of the episode is slightly different, but each of their stories ends the same.

That's with Johnny Parks screaming for his wife Jennifer to call 911 and a short hospital stay for Jordan.

Johnny walked into his kitchen on a cold, snowy winter day in February after shoveling only to see his son, Jordan, lying face down on the floor unconscious.

Jordan Parks, Niagara Wheatfield senior quarterback, said after Wednesday's practice that he was in and out of consciousness the whole time, but his father's take from that morning is a bit grimmer.

It starts with Johnny coming into the house, only to see something no parent wants when a child is concerned. Johnny first checked to see if there was a pulse. There was a faint one. Jordan briefly came to, telling his dad he loved him before his eyes rolled back into his head.

"You see your child laid up in ICU, and you don't know what's wrong with him," Johnny recalled of the scary moment. "You see a kid in the prime of his life, you're praying that he just lives, not that he plays sports."

Jordan Parks not only survived, but is having the time of his life on the football field as well with his Falcons teammates.

While he is just one of many who has contributed to Niagara Wheatfield's 3-0 start, Parks is the one who more often than not has left folks breathless on game day by delivering at least one long, highlight-reel scoring run.

Parks has rushed for seven touchdowns, including scoring runs of 52, 75, 83, 94 and 95 yards. He's also passed for three touchdowns, caught two passes and made the play on defense that sparked NW's 35-12 comeback win at Hamburg last week. 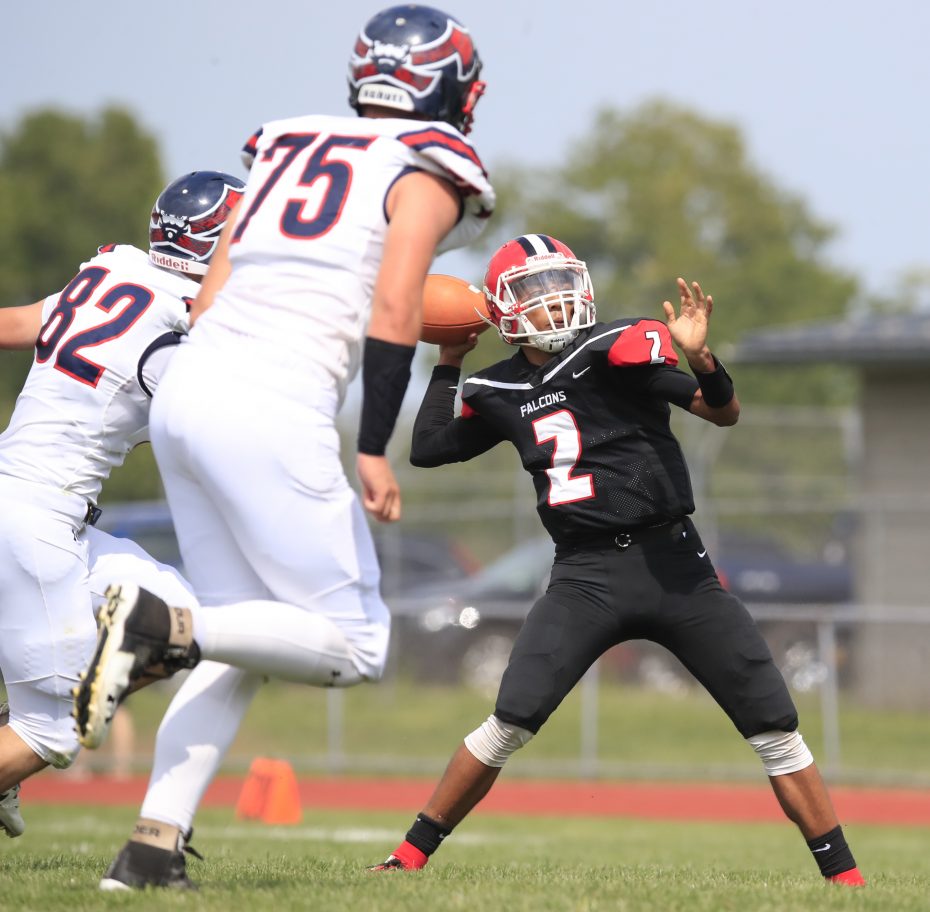 The Falcons team return to action Friday night at Strider Field against host Jamestown in a Class A-1 Division affair.

"It feels great just being out there with my guys, guys I grew up with getting Wheatfield back on the map," said Parks, who is in his third season on varsity. "I'm just more into the offense, and I know what I have to do now to get the job done. It's just more repetition, knowing where we got to be (on offense) … and executing very well."

For the season, Parks — who was limited in one game by the flu — has rushed 31 times for 612 yards. He's completed 8 of 19 passes for 154 yards. He plays some defensive series and when called upon has broken up a pass and recovered a fumble.

That's includes being a battler.

After spending three days at Children's Hospital, Jordan then went to Strong Memorial in Rochester. It was determined that Parks had a one-in-a-million heart condition that led to his collapse.

After watching him for a month and installing a heart monitor, his physician determined Parks was in good health and that he could resume normal activities, including athletics. Although it was too late for Parks to return for NW's baseball season, it was early enough for him to set his sights on killing it this football season. He hit the offseason hard for the Falcons.

It's showing in how hard he runs and finishes every play.

It should be noted that Parks, should he not feel quite right, can pull himself from the game. The arrangement works just fine with coach Russ Nixon.

Parks' doctor is able to keep track of the heart rate on his phone. An alert goes to him and Parks' parents should Jordan's heart beat approach dangerous level.

"They said this was a rare occurrence (with the illness)," Nixon said. "Jordan is a very good athlete. His heart is in very good shape. They said it's rare that it happened to an athlete that's in as good of shape as Jordan."

Now, back to last week's pass break up.

Parks could've made an interception at Hamburg's 40 in the second quarter. Instead of snagging a catchable ball, he knocked down the third-down pass attempt resulting in the Bulldogs needing to punt from near their goal line. The punter fumbled the snap out of bounds leading a safety and the first two of 35 straight points by the Falcons — including 22 before halftime. The blitz included another one of those highlight reel runs for Parks, who took it 95 yards for a touchdown.

"He's definitely a weapon," Nixon said. "He has the ability to break through the line and go the distance."

"The biggest thing is we see the maturity in him," Nixon said. "It doesn't have to be him that makes the play. Others have stepped up offensively and defensively."

Last season, the Falcons showed they could score but had trouble stopping their opponents from scoring.

Collectively, they've figured it out on defense this season without sacrificing the offense.

Though the 'O' has other playmakers in Nick Stott, Jake DeWolf and backup quarterback Christopher Gordon (two TD passes), Parks has the elusiveness that gives defensive coordinators headaches.

"He worked hard in the offseason to find that finishing kick step," Nixon said.

This week's other top games

-- Pioneer (3-0) at Cheektowaga (3-0), 7 p.m. Friday.  Pioneer scored attention-getting win over last year's Section VI Class B runner-up Maryvale. Now it visits defending Class B champion Cheektowaga in a game that could decide who wins the division. Warriors have yet to give up a point this season. Cheektowaga's KeShone Beal off to another sensational start to a season at QB.

-- Bennett (2-1) at Williamsville North (2-1), 7 p.m. Friday. Bennett is coming off win at Clarence. Another road win in Class AA and the Tigers could inch their way closer toward securing a playoff berth. North lost tough one at home last week to defending Class AA champion Lancaster, but there are no weak sisters in Class AA.

-- McKinley (1-2) at Kenmore East (1-2), 7 p.m. Friday. Both teams are 1-1 in A-2 Division, which means this contest could determine which one of these teams makes the playoffs and which one is preparing for bowl season.

-- Clarence (1-2) at Lancaster (3-0), 7:30 p.m. Friday. Lancaster overcame flu and North last week. Do the Legends have enough in the tank to overcome a Clarence team desperately in need of a win?