That's because Cory Martin, a special education teacher at Kenmore East High School, proposed to Amanda Eichinger during a schoolwide assembly at Edison, where she teaches second grade.

It wasn't the Emmys proposal. But students, colleagues, friends and family were thrilled for the couple, who both attended Kenmore-Town of Tonawanda schools and who started dating four years ago after meeting at a Buffalo Bills watch party.

"I can’t think of a better way he could have done it," Eichinger said in an email. "It’s a great district and building to be in, and it’s perfect that we grew up here, live here, work here and now we got engaged here."

Martin said he started planning the proposal about a year ago.

Eichinger was a student teacher at Edison last school year, and Martin said he wanted to propose to her at whichever school she ended up getting a full-time position.

"I know how dedicated and passionate Amanda is about teaching, so why not propose in front of all of her students that she works so hard for?" Martin said by email.

When that turned out to be Edison, Martin reached out to Principal David King over the summer to ask if he could pop the question to Eichinger at a school assembly.

Martin initially wanted to do it after the football season ended, because he coaches varsity football at Kenmore West. But King suggested an assembly that would take place on Monday, and Martin worked with King and Chris Robey, a physical education teacher at Edison, to make it happen that day.

Martin kept the engagement ring at his mother's house so that Eichinger wouldn't stumble across it, but said it was stressful trying to keep his plans a secret.

Edison students and staff were gathering to kick off the school's big fundraiser, a coupon book sale, Eichinger said. King told her ahead of time that he wanted her to come up on stage as one of three teachers who would model positive behavior to the students in the audience.

Eichinger was called up last, and King told everyone that she would have to put on a blindfold to demonstrate how people have to focus to be good listeners. Eichinger said King told her to balance on one foot, stick out her right hand and then to take off her blindfold.

"I thought, 'Well that was quick and painless,' as I was lifting up the blindfold, and then I saw Cory kneeling in front of me," Eichinger said. 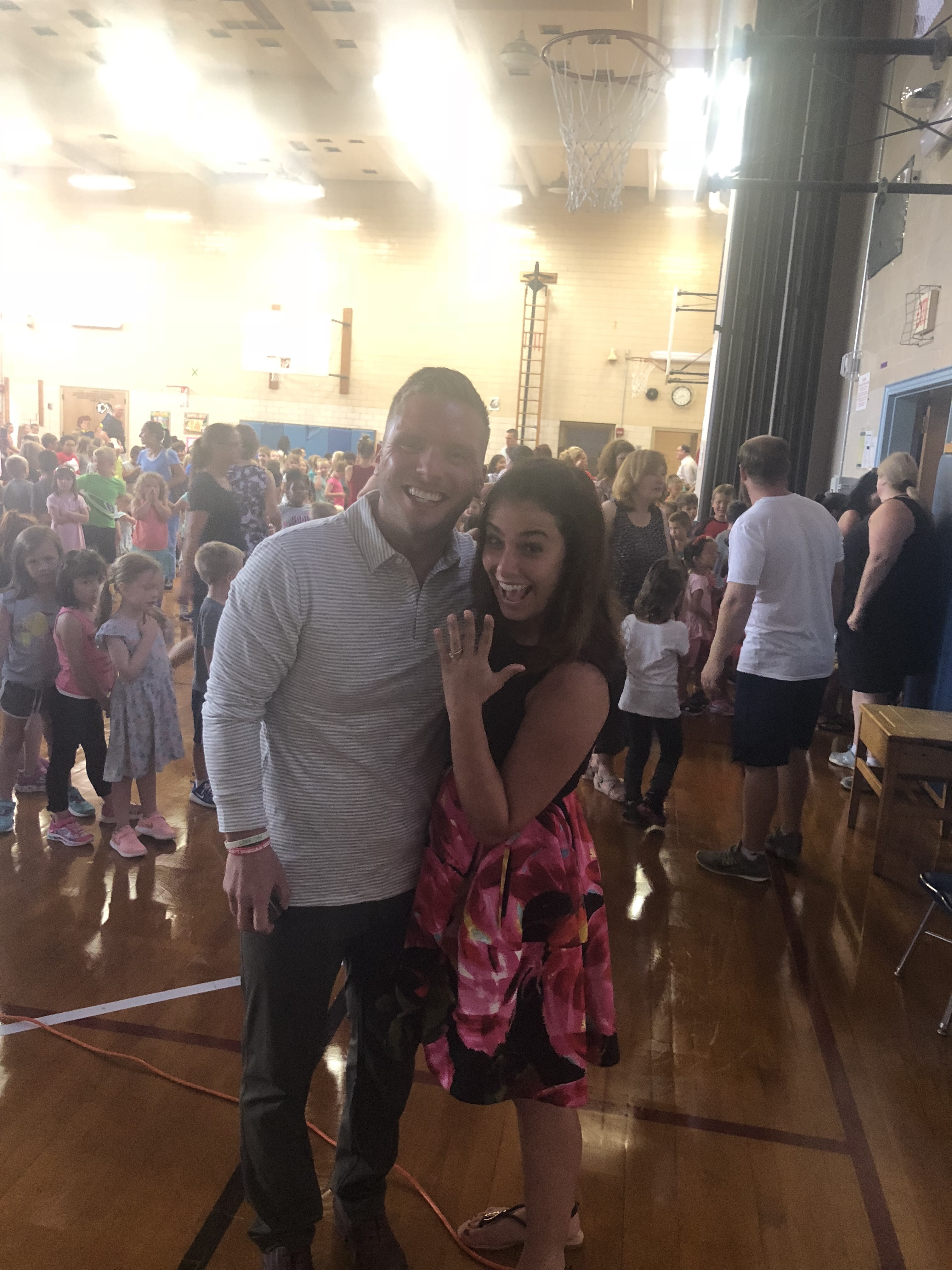 Martin and Eichinger after the proposal. (Photo courtesy Lindsey Martin)

She said she was in shock and temporarily forgot she was standing in front of the whole school when Martin came right out and said, "Amanda Catherine Eichinger, will you marry me?” (Watch the video, courtesy of Martin's sister, Lindsey, here.)

"I don’t think I even said anything, just started nodding yes like I was a bobblehead figure. My arms and hands were so tingly I could barely feel them, and I just couldn’t believe what was happening," Eichinger said. "Then we hugged and I started looking around and realized his mom and sister were there too, and that everyone was filming and cheering, and it was just so amazing and perfect."

Eichinger said students and colleagues have offered hugs and congratulations all week.

"The children were so great after the assembly. Some of them thought I got married, a few asked if I even knew who 'that guy' was," she said. "They’re so adorable and it made for a lot of memorable stories."

Some of her students made her cards, and one gave her a ring holder. She said she went to her family's house after school that day to tell them the news before it spread too far on social media.

"I actually used a Post-It note one of my students wrote me after the assembly to break the news to family. It read, 'Dear Eichinger you are a god techr you are going to hav a grt husbind,'" in second-grade spelling, Eichinger said. "My mom and Nana were sort of like, 'This is cute, but why are you showing it to us?' Then I showed them my hand. My mom started jumping up and down, clapping and crying."

The district put up a Facebook post about the engagement. One mother commented: "My kindergartener came home and said a teacher got pregnant in the gym today!! Didn’t seem accurate ... this makes much more sense."

Since the proposal went off so well, would Martin and Eichinger consider having their wedding reception at the school?

"That isn’t a bad idea. I might be making another trip into Mr. King’s office to ask him," Martin said.