"It's a truth universally acknowledged that when rich people move into the hood, where it's a little bit broken and a little bit forgotten, the first thing they want to do is clean it up."

Austen fans will enjoy the way Zoboi has updated Austen's characters and plot points and woven them into a fresh narrative even if some parallels seem a bit strained. As the Bennet family was in Austen's original, the Benitez family is strapped for cash, with five sisters crammed together into a single bedroom, the living room of their small apartment. Zuri (Elizabeth) is the outspoken poet and defender of the family, dreaming of attending Howard University. Older sister Janae (Jane) has finished her freshman year at Syracuse. Marisol (Mary) is obsessed with money; twins Layla and Kayla (Lydia and Kitty) are only 13. Their hard-working father likes to read Howard Zinn and the New York Times; their gregarious mother cooks vast quantities of food for rowdy neighborhood block parties. But the neighborhood is slowly changing as affluent people move in. The wealthy Darcy family has spent a pile renovating the derelict mansion across the street, and their two sons, Cornell student Ainsley and his more reserved younger brother, Darius, catch the elder sisters' attention.

The role of the villainous Wickham character of the novel is filled by Darius' private school classmate, Warren, whose interest in underage girls inflicts different kinds of damage in an age of social media.  Zoboi offers a colorful character in Mandrina, the Benitezes' landlord, who practices Santeria and functions as a sort of muse to Zuri. As in the original, Zuri is stubbornly hostile to Darius and experiences a sort of epiphany when she runs into him at a poetry reading.

While the Zuri-Darius romance doesn't capture the spirit of Austen's original, Zoboi has fashioned an endearing heroine in Zuri Benitez, a proud, fiercely loyal girl trying to come to terms with the changes coming to her neighborhood and setting a course that will take her out into a world bigger than the much-beloved but still-claustrophobic confines of the one she knows. 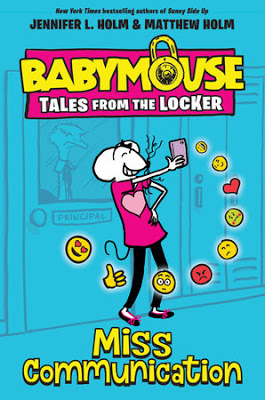 The talented brother and sister team behind the Babymouse series  and poignant graphic novel "Sunny Side Up" offer an entertaining and pointed exploration of how cellphones and social media have changed the middle school experience for the worse in their second "Tales From the Locker" series of Babymouse in her tween years. Babymouse believes she may be the only person in middle school without a cellphone so she begs her mother for one, only to end up with the Whiz Bang Mini, a model she soon finds out is considered uncool. (There are several digs at the sales pitches and hidden costs of cellphones.)

Babymouse soon discovers that having a cellphone is exhausting, as she tries to develop a following on SoFamous and gets in trouble for watching koala videos during class.  Her desperate attempts to curry favor with the popular Felicia include ordering every flavor in a single latte, getting her whiskers professionally braided and photobombing Felicia and her friends using a person locator app called "Five Circle."

With their trademark mix of text and graphic panels, the authors offer a hilarious if sometimes painful portrait of Babymouse struggling to win popularity in the digital world only to find herself feeling as though she has no friends in the real world. The book ends with Babymouse's hilarious social studies report on ancient Rome.