As a young man I had the opportunity to travel to Israel, and memories of the food I encountered have stuck with me.

The most memorable meal was at a restaurant that covered the table with little plates full of delicious things, collectively called “maza.” That was where I found out that all the hummus I’d ever eaten in the United States was a fraud, a sludgy impostor compared to this earthy, tangy, savory artistry wrought from the humble clay of ground chickpeas with sesame paste.

And that was even before I’d gotten into the babaganoush, roasted eggplant mash, and lebneh, yogurt spread that’s halfway between goat cheese and cream. By the time the alleged main event – a whole fried fish – arrived, I had shoveled so much down, with warm pita bread, that I could scarcely do it justice.

Dinner at OR by Falafel Bar brought me back, with compelling vegetarian-friendly cooking and maza so engaging they make entrees optional.

Israeli chef-owner Oded Rauvenpoor has been cooking for Buffalonians for 15 years, first at The Greek on Transit Road in Depew, then in Falafel Bar locations on Elmwood Avenue, Main Street and Sheridan Drive. 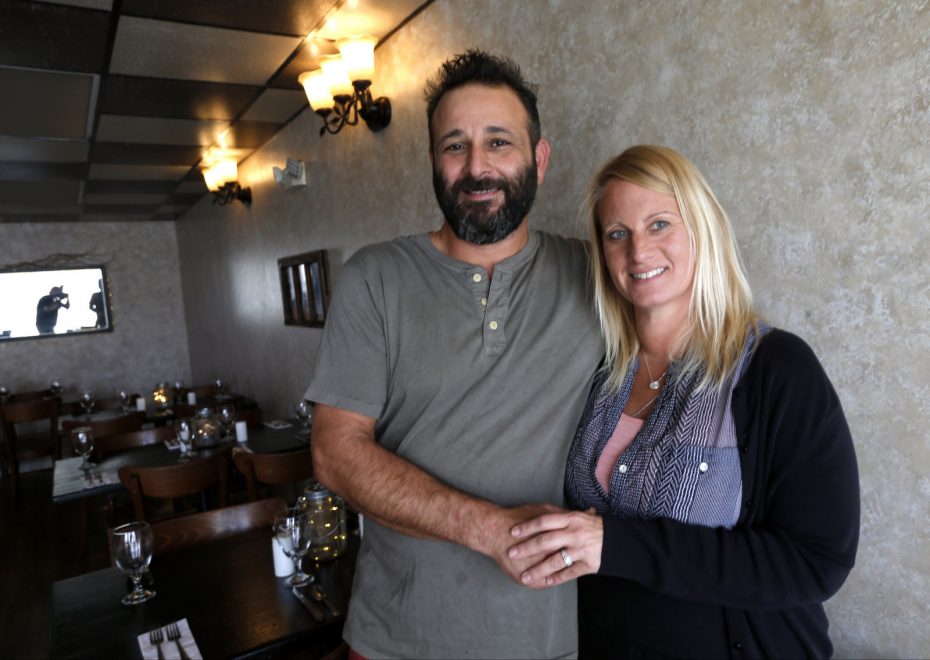 Owners Oded and Keri Rauvenpoor at "Or By Falafel Bar" on Sheridan Drive in Amherst on Wednesday, Sept. 12, 2018. (Robert Kirkham/Buffalo News)

After a hiatus spent in Israel, he returned and opened a new place with his wife Keri. It's called OR, named after the Hebrew word for light. The new spot, on Sheridan Drive again, is certainly lighter, done up in dove grey and earth tones, decorated with photographs of Israel. A beer and wine license is in the works, and the Falafel Bar food truck extends Rauvenpoor’s reach.

Lots of restaurants talk about little plates, but those are usually dedicated to standalone concepts. In the Mediterranean, Middle East and elsewhere, one effect of the maza culture is encouraging synergy between plates.

So while OR will meet your wishes for the standard American model dinner of appetizer and entrée, or entrée alone, it’s also a good place to try the Middle Eastern model. Order a bunch of meze and a basket of pita bread, and maybe some grilled meat. 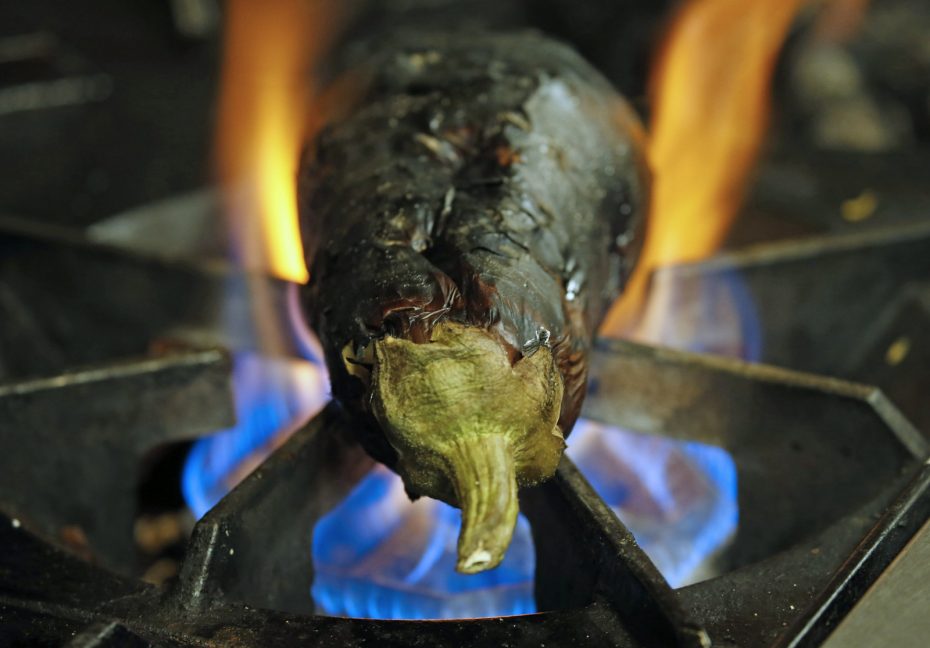 An eggplant becoming the dish Burning Eggplant at OR by Falafel Bar. (Robert Kirkham/Buffalo News)

Ordering a “traditional maza” array ($28, picture at top) brought seven small dishes. They can all be ordered separately, but together they were enough food to make a swell meatless dinner for two, with accompanying pita bread. (At our visit the pita bread was warm, puffy and plentiful, but an oven problem has put OR’s housemade pita bread on hiatus.)

It’s all you need for a mix-and-match adventure. Scoop up smoky, silky babaganoush and dot it with Moroccan carrots, vibrant with fennel and chile flake. Spread lebneh, almost as thick as cream cheese but with acres more tangy dairy character, and balance its richness with bracing pickled cabbage, puckery with lemon rind and aglow with turmeric. Grape leaves rolled around rice seem meant to be dragged through garlicky tzatziki yogurt sauce.

Turkish eggplant was firm fried eggplant cubes in an aromatic tomato sauce with bell peppers, a combination that went well with other meze. So did the seventh dish, tabouli, the Lebanese salad of tomato, parsley, and bulgur wheat dressed with lemon and olive oil, this version on the green side, with plentiful fresh mint and scallion. 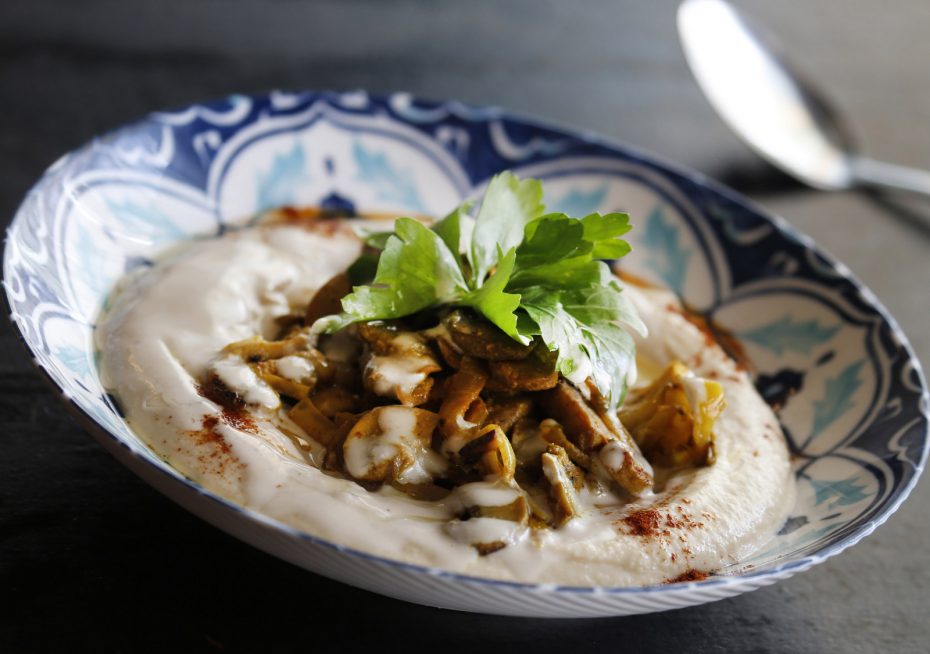 Hummus with mushrooms at Or by Falafel Bar. (Robert Kirkham/Buffalo News)

Pleasing standalone meze included burning eggplant ($10), a whole vegetable charred, split open and dressed with garlic, pine nuts and roasted tahini. OR’s “green wings” (6/$13) dress fried chicken digits in a lovely verdant pesto of jalapeno, cilantro and garlic, spicy enough to light up your life but not leave you crying. Falafel patties (5/$8) were packed with herbs inside their bronze crust.

Order the best hummus in town, too. Ground daily from freshly cooked chickpeas, it’s looser, lighter and nuttier than versions made from canned legumes, and creamier than most, made with plenty of Lebanese tahini and speckled with chile powder and parsley.

Options include regular ($8.75), topped with sautéed spiced mushrooms ($10). But a lamb version ($13) stole the show, adorned with a jumble of ground lamb sautéed with tomatoes, onions, plus more tahini. The savory lamb fat carried the sweetness of caramelized onion and tomato through the dish, and golden-brown pine nuts contributed toasty crunch. 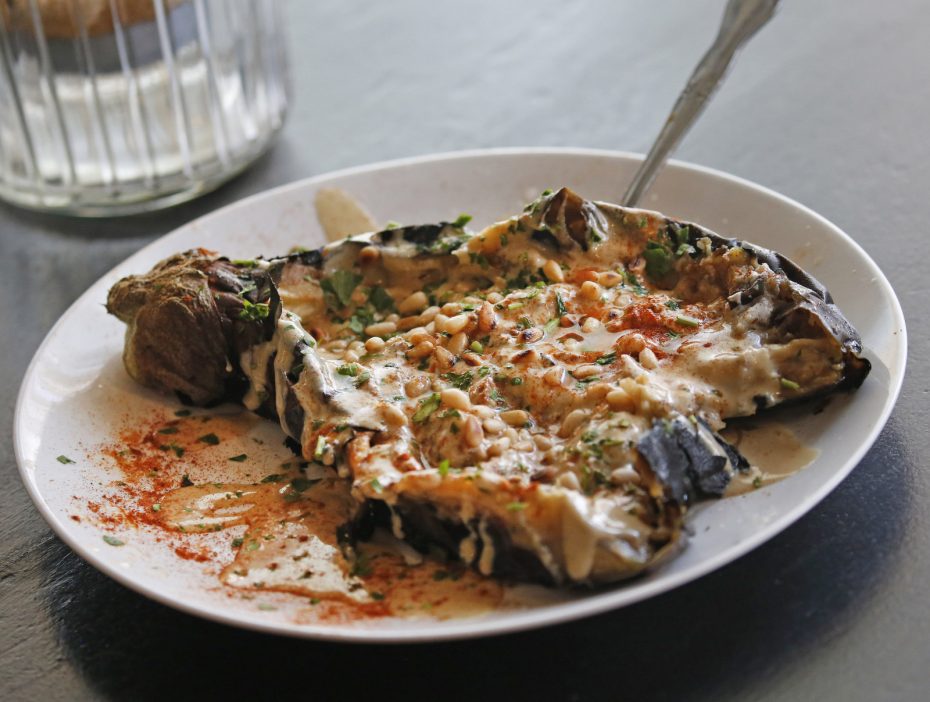 At OR, kabobs come in white and dark-meat chicken ($17), lamb ($21), and kofta, long grilled meatballs of seasoned beef ($17) and lamb ($19). They’re served Middle Eastern style, with grilled tomato, and a choice of starch, like fries, Greek potatoes or mujadarra, a rice pilaf with lentils and caramelized onions.

My favorite was the lamb kofta, savory torpedoes lively with spices and herbs. No wonder that the lamb burger, a thick patty of a similar mixture, was also deeply satisfying. It was delivered with pink inside as requested and dressed with lemony tahini sauce that comes on the side.

Overall, the entrees didn’t capture my attention the way the maza did. Spanakopita ($14), spinach and feta in a neat pastry package, was tasted mostly of browned filo. Spicy shrimp ($21), served over rice, was surprisingly tame, its garlic and smoked paprika flavors submerged beneath tomato flavor.

There is, however, an outstanding chicken schnitzel ($17), two pieces of pounded chicken breast coated with crumbs and sesame seeds and fried to golden brown.

OR brings far-off flavors home to Sheridan Drive. Fans of Middle Eastern cuisine, plus vegetarians and vegans of all stripes, ought to put the restaurant on their try-out list. If you’ve been in the dark about where to find next-level Middle Eastern food, head for the light. 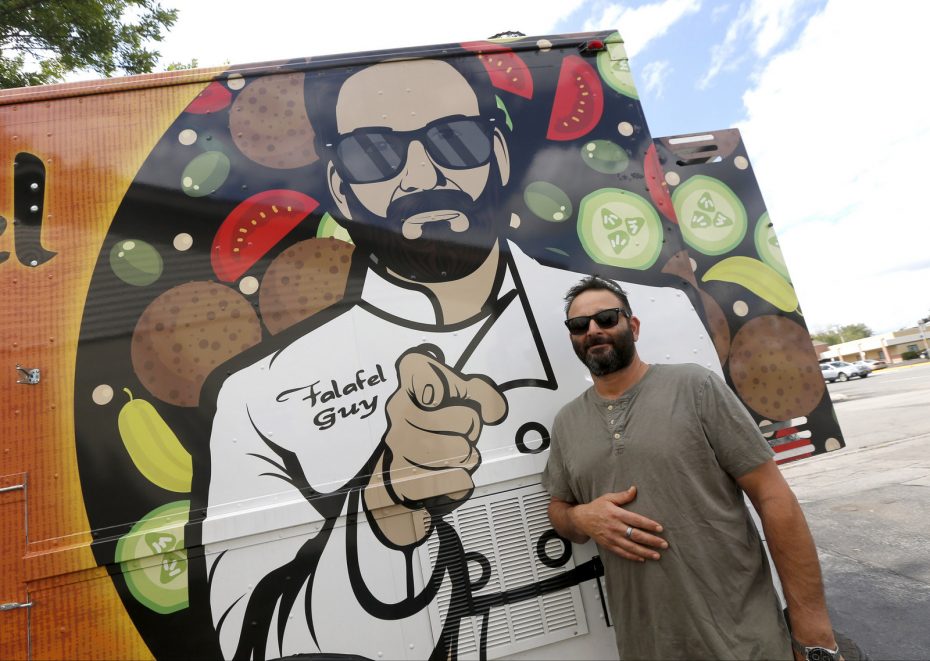 Owner Oded Rauvenpoor with his food truck at "Or By Falafel Bar" on Sheridan Drive in Amherst on Wednesday, Sept. 12, 2018. (Robert Kirkham/Buffalo News)