It's only fitting that Knox Farm, an estate that shares a name with the Albright-Knox Art Gallery, is the new home of Buffalo's two-day music and cultural festival, Borderland.

The sprawling, 633-acre former estate of Buffalo's prominent Knox family, is best known for its strikingly-scenic public grounds and popular dog park. And now, for being the home of a two-day music festival that in its inaugural year expects the likes of John Oates, The Revivalists, Dr. Dog and more.

East Aurora expat Jennifer Brazill, who's worked for Bonnaroo Music Festival and Dave Matthews Band, is igniting this festival in her hometown. She told The News' pop music critic Jeff Miers that she's always wanted to bring something special to Buffalo.

Inspired by Knox Farm and Buffalo's rich history as a leading industrial city, she wanted to curate a festival that felt just that - curated. From the country-style artists that will blend right into the grassy, rural backdrop, down to the eclectic group of artisans, who will be demonstrating everything from beer brewing to sheep-shearing.

Lineup: Festival-goers are in for a treat while listening to Saturday headliner The Revivalists. Expect a lot of energy with the seven-piece American rock band, known for slightly folky, catchy indie-radio hits "Wish I Knew You" and "It Was A Sin."

By the end of their set, or 30 seconds into the song "Soulfight," the band's bittersweet lyrics and spirited sound will have you soulfully belting out lyrics. If you don't know the lyrics before going in, you will undoubtedly have the chorus down halfway through each song.

Headlining Sunday's show is Rock and Roll Hall of Fame inductee John Oates with The Good Road Band. Oates describes his newest album "Arkansas" as “like Dixieland, dipped in bluegrass, and salted with Delta blues.”

Oates is one-half of '80s hit pop band Hall and Oates, known for poppy, upbeat, prime-karaoke music like "You Make My Dreams" and "Maneater." "Arkansas" is a total diversion from Hall & Oates, unrecognizable to the decades-old songs he still plays with Daryl Hall. Inspired by his idol, country-blues artist Mississippi John Hurt, "Arkansas" blends blues and country with a sweet, wholesome sound. 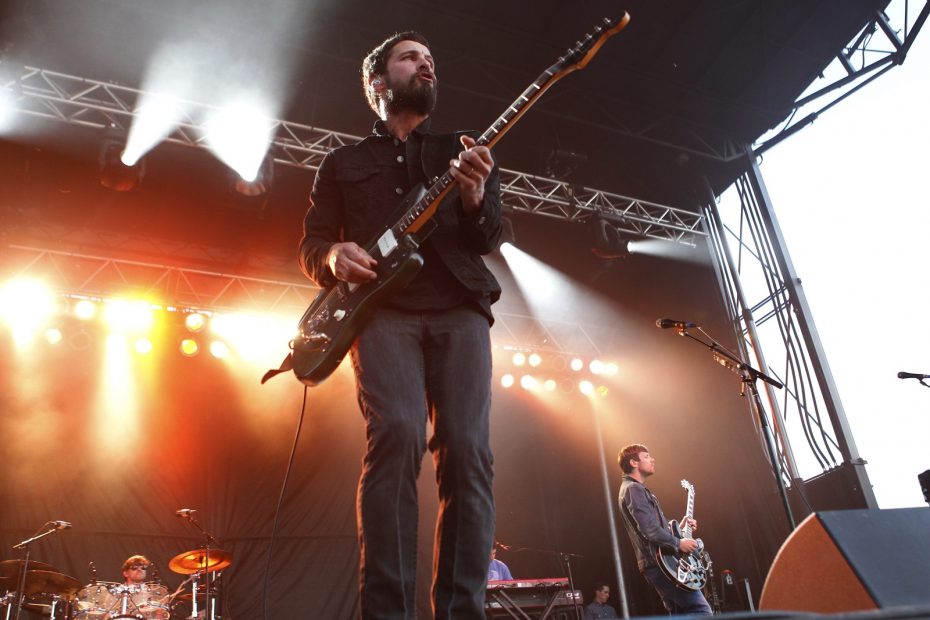 The Sam Roberts Band is one of the main-stage headliners on the just-announced Borderland Music & Arts Festival. (Sharon Cantillon/Buffalo News)

Sam Roberts Band, an alt-rock and indie group based in Montreal, Canada, together since 2001 and on its sixth album, "Terraform," which was recorded in The Tragically Hip's studio in 2016. Popular songs include "Brother Down" off of "We Were Born in a Flame," "We're All in This Together" and "Shapeshifters," both off 2014 album "Lo-Fantasy."

You might have heard American rock band Dr. Dog's relaxed 2010 hit "Heart it Races" before. Over their nearly two-decade band life, they've crafted 10 albums and delivered several hits like melancholic "Where'd All the Time Go?"

For much of those two decades, their music has been both romantic and sad, the latter masked by buoyant melodies. With their latest album "Critical Equation," the five-piece band wanted to entirely flip that. Feeling "stuck," as they told NPR earlier this year, the band took time off to soul-search, work on their families and create an album different than the rest. For them, this meant darker.

With such an expansive discography, some of their old hits are sure to be played alongside their heavier, newer ones.

Artisans: Area artisans will be demonstrating their crafts all day long, both days. Any slight interest you have is probably covered in the diverse artisan lineup. 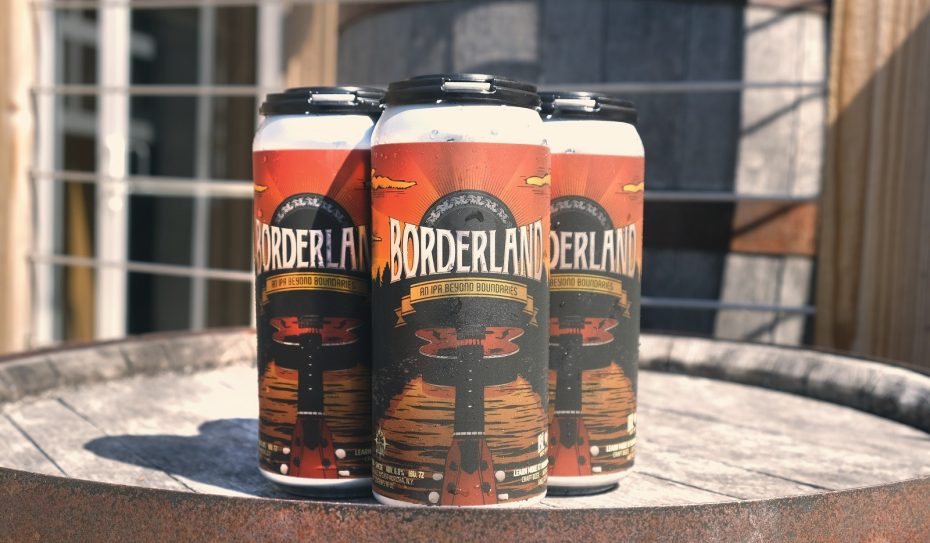 Borderland Music and Arts Festival will have two beers brewed specifically by 42 North. (via 42 North)

Lots to drink: What else do indie music lovers and artisan craft aesthetes have in common? Likely, a love of a good, locally-made IPA.

East Aurora brewing company 42 North even created a Borderland IPA for the festival, ringing in at 6.8 percent ABV. Expect hints of tropical fruits and pine when you try it.

Local breweries Big Ditch Brewing Company, Blackbird Cider Works, Community Beer Works and Resurgence Brewing Company will all be there. Also, making the trek out is Collective Arts Brewing and Henry of Pelham from Ontario, Canada, Saranac Brewing from the Adirondacks and Ithaca Beer Company. If all that beer and wine is too heavy, Press: Premium Alcohol Seltzer will sell their alcoholic seltzer waters.

Available at merchandise tents is branded stainless steel mug, created by Borderland organizers to commemorate the festival. If you use your mug at a beer tent, you'll get a discount.

Camping: No camping is allowed on-site, but the festival organizers recommend Sprague Brook Park in Glenwood.

Transportation: Parking is available at the Polo Fields or Knox Road. If those fill up, overflow parking will be nearby with a free shuttle transporting you to the venue. If you're using a ridesharing app like Uber or Lyft, there is a designated area for rideshare drop-offs and pickups.

Kids Zone: Children don't have to be left out of all the sheep-shearing, folk-listening fun. Kids 10 and under are free with a parent or guardian. Plus, there will be a kids zone just for them, with music, arts and crafts.

The Cause: Some of the proceeds will benefit Knox Farm State Park, Buffalo Niagara Waterkeeper, The Boys and Girls Club of East Aurora and Friends of Knox Park.

Extra: But wait, there's more. On the Knox Mansion's front lawn, Buffalo Power Yoga is leading a free, hour-long class at 9 a.m. Saturday. After you say your last "Namaste," head over for mimosas, craft beer and morning bluegrass music at 10:30 a.m.

On Sunday, take part in a free hike and learn about Knox Farm's plants, insects and animals at 9 a.m. 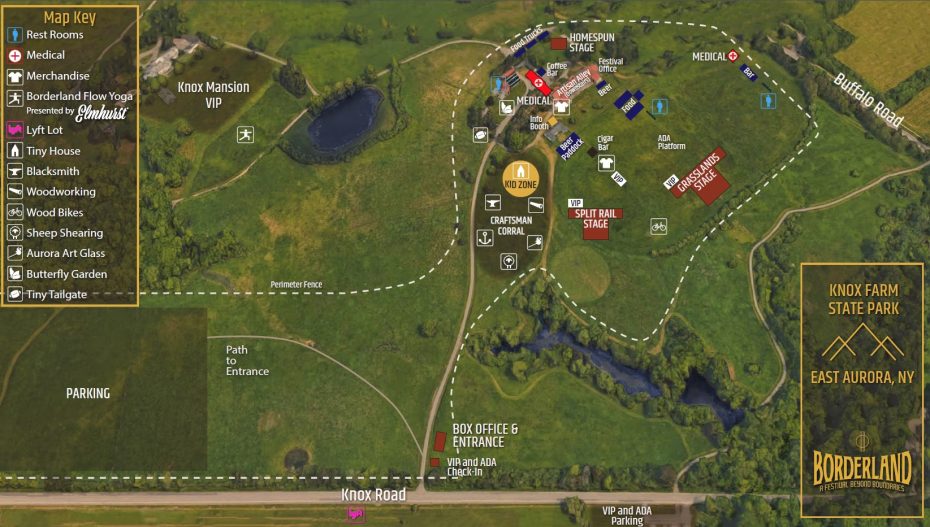