The beginning of the Buffalo Bills' schedule always figured to be something of a buzzsaw, especially with uncertainty at quarterback and pretty much everywhere else on offense.

The surprise is the horrific performance of the Bills' defense, although the struggles of the front seven are somewhat less jolting than those on the back end. You could argue the line and linebacking corps are going through a transition with key newcomers via free agency (tackle Star Lotulelei and end Trent Murphy) and the draft (linebacker Tremaine Edmunds).

Things are different in the secondary, which was considered the strength of the team last year and, in returning all but one starter, the leading cause for optimism this season.

For now, it is nothing short of a disaster.

"We're hurting ourselves in certain situations of the game, not being able to get off (the field) on third down and just kind of, sometimes, playing undisciplined," safety Jordan Poyer said Wednesday.

"Each defense has a weakness," said the other starting safety, Micah Hyde. "I think last year we understood that. Not that we don't this year, but we kind of limited the offense from exploiting those and this year we haven't done a good job."

Those fairly blunt appraisals represent a significant shift from what was generally heard in 2017, when the secondary's turnover-causing ways were key in allowing the Bills to finish 9-7 and sneak into the postseason. Hyde was a Pro Bowl selection, Poyer was Pro Bowl-worthy and cornerback Tre'Davious White was one of the top defensive rookies in the NFL.

Words can hardly describe the mess of the past two weeks, but numbers can. The Ravens' Joe Flacco and the Chargers' Philip Rivers have completed a combined 48 of 61 passes for 492 yards and six touchdowns without an interception.

Let's start with the elephant in the room — or, to be more precise, the one that exited the dressing room at halftime of the Charger game. Vontae Davis' sudden retirement after two quarters of a 31-20 loss became a major embarrassment for the Bills and serves as one of the ugliest reminders that the secondary is no longer what it was a year ago.

Last Sunday, Davis started opposite White and was exposed to the humiliation through which Rivers and his receivers put Buffalo's DBs in building a 28-3 lead late in the second quarter. Davis was only spared a similar fate the week before because he was an inactive.

He was supposed to have been the upgrade the Bills wanted over E.J. Gaines, who started most of last season. That never looked to be the case during training camp or the preseason, but there also weren't any other candidates emerging for the role from among Phillip Gaines, Taron Johnson and Lafayette Pitts. Compounding matters is the fact Gaines and Johnson are injured.

"It just happened, so guys' emotions were pretty high, kind of like, 'What the hell?' " Poyer said of Davis' abrupt departure. "It's a decision he made and he'll probably have to live with for a long time. Vontae's a human being, so I'm going to support him off the field, too."

The bottom line is the Bills' decision-makers badly miscalculated on two counts: allowing E.J. Gaines to bolt via free agency and assuming they could do better with Davis.

Still, the three remaining starters don't buy the notion that being unsettled at one corner — and all of the distraction caused by Davis' bizarre move — is a factor in the secondary's issues.

"There's not one spot that's bringing us down," Poyer said.

So what's the larger problem? Communication has become a favorite word being tossed around by coach Sean McDermott and the defensive backs.

Really? The most cohesive group on the field last year that returned all but one starter is having problems communicating on the field? How can that be?

"I think we all have to keep in mind that these guys are just in the start of their second year in this system," McDermott told reporters. "We're still trying to build up the rep count, the 1,000 reps that everyone talks about, the time on task so guys can play fast. So there's certainly some things we have to do better, and that's where I have familiarity with the defense and getting more involved just with some of those areas." 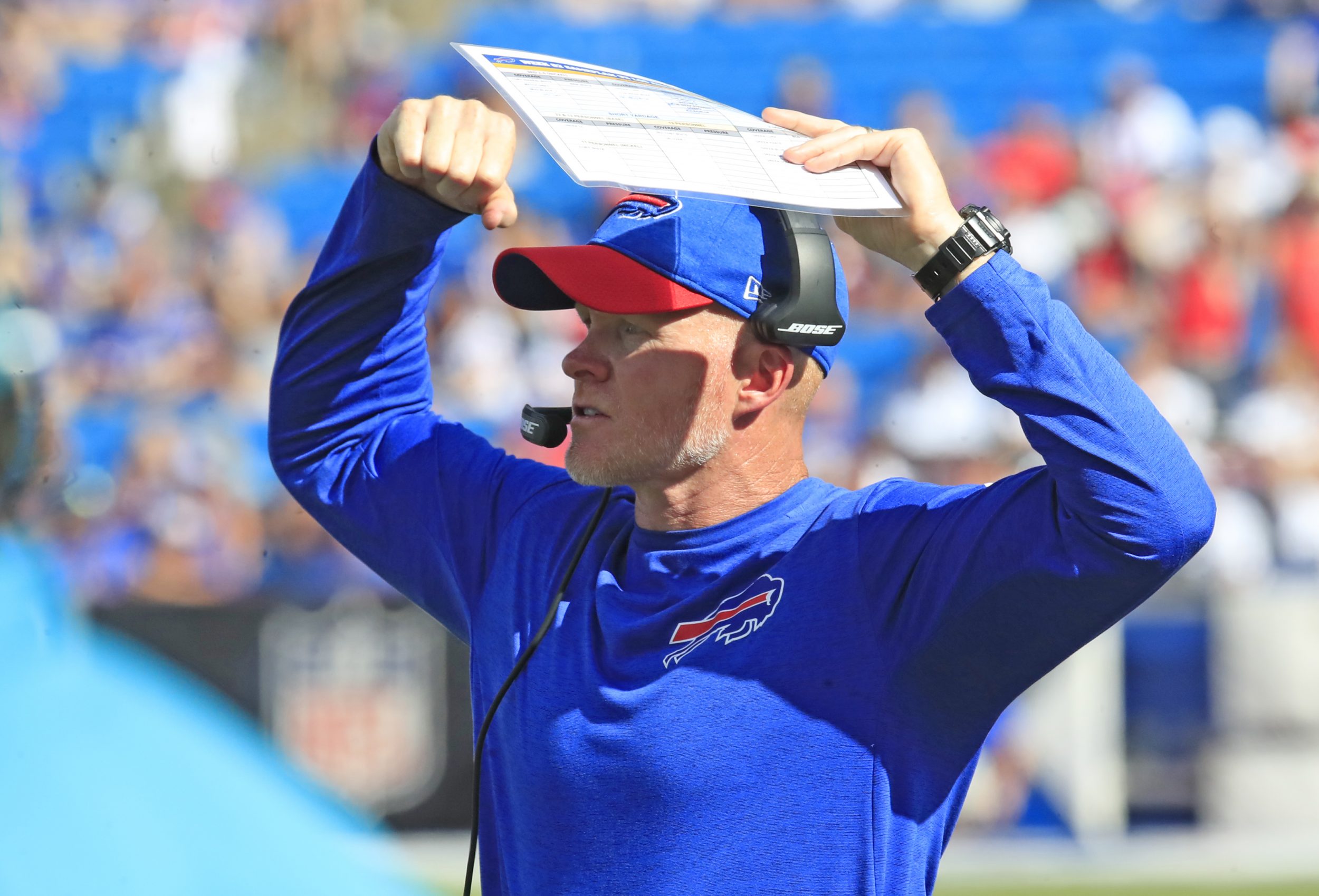 Reading between the lines, it sounds as if whatever McDermott and his coaching staff have been teaching this year isn't landing as well as it did last season. It also seems to at least partly explain why McDermott felt the need to take play-calling away from defensive coordinator Leslie Frazier at halftime last Sunday. Frazier might be an accomplished veteran coach with a long professional history with McDermott, but the scheme is McDermott's. No one understands it better than him, although it's imperative that his players have a good handle on it. Remember all of the confusion when Rex Ryan wrongly assumed his complex defensive scheme could be installed in plug-and-play fashion?

Hyde, for one, downplayed the play-calling shift, as did his fellow DBs. As far as they're concerned, the bigger challenge is opponents having a far greater expectation and understanding of what the Bills are doing with their coverages this season.

"We're seeing a lot more jet sweep, we're seeing a lot more messing with our eyes and our gap assignments. It's just, you know where you're supposed to be pre-snap, but then once post-snap happens and stuff happens, you have this gap but then your gap moves and so you've got to go to his gap (pointing to his left). We've just got to fix our eyes and continue to work."

McDermott also put some of the blame elsewhere. "Don't forget that the secondary connects to the front seven, so there's communication there (involving new players)," he said.

What about the change at secondary coach McDermott made after only one year, replacing former long-time NFL DB Gill Byrd (now at the University of Illinois) with long-time friend John Butler?

Although the players don't point to it as a cause for what's gone wrong so far, they do acknowledge it is yet another transition with which they're dealing.

"(Byrd) brought a lot of things to our secondary last year," Hyde said. "Obviously, he played in this league for a long time. He was kind of one of those guys that kept everybody grounded. If we had a bad game, he'd let us know, 'Don't worry, stay focused.' If you had a good game, he'd say, 'Hey, you guys aren't as good as what you think you are.'

"But at the same time, JB stepping in this year, he brings a whole new dynamic, a skill set to coaching that we didn't have last year, so I don't think it has anything to do with the coaching. It's just on us to go out there and perform and come up with those plays. It's a young season, hopefully we can (do that) in the near future."

The near future, which comes with Sunday's game at Minnesota, brings even greater potential for disaster. The Vikings have a solid quarterback in Kirk Cousins and two of the NFL's top receivers in Adam Thielen and Stefon Diggs.

In two games, Thielen and Diggs have combined for 30 receptions for 404 yards and four touchdowns (three by Diggs).

"We're not panicking," Poyer said. "But we know we got a lot of work to do, we know we've got some new guys. We've got to keep pushing, keep coming along, and I think we got the right guys to do it."

A year ago, that seemed a lot easier to accept at face value.