When Valentino Dixon wakes up Thursday morning, a free man for the first time in 27 years, only one thing will be on his agenda.

Making breakfast for his 90-year-old grandmother.

"It's the greatest feeling in the world," Dixon said of his newfound freedom Wednesday. "We've been waiting 27 years for this."

After more than two decades in prison for a murder he didn't commit, the Buffalo man was exonerated after someone else confessed to the fatal shooting of 17-year-old Torriano Jackson in 1991.

When Dixon stepped out of the courthouse, his friends and family, some of whom he hadn't seen in 27 years, erupted in applause and yelled "yeah, yeah, yeah." Dixon responded by hugging his mother Barbara and daughter Valentina, and telling the crowd, "I love you."

"My Mom has been with me since Day One," he said, his arm wrapped around her shoulders.

Dixon, known for colored pencil drawings of golf courses he created as a prisoner at Wende Correctional Facility, was charged in the case but has repeatedly professed his innocence over the years.

About an hour before his court appearance Wednesday, Lamarr Scott, 46, admitted he was the man who killed Jackson. Dixon had been serving a prison term of 38 years to life. 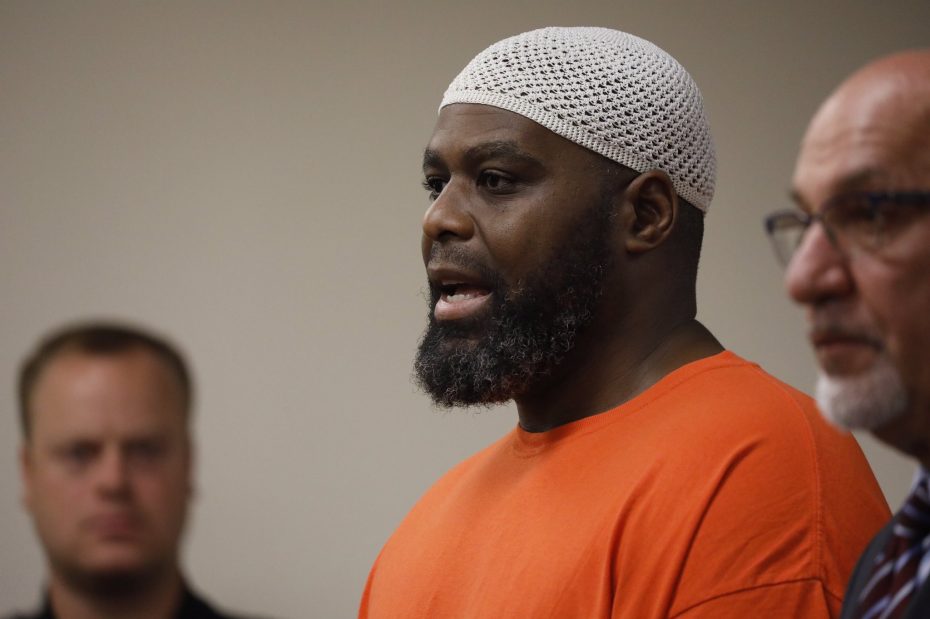 Scott, who is imprisoned for a different shooting, told the judge that a fight broke out that morning at Bailey and East Delavan avenues and his first reaction was to find the gun Dixon had given him.

"I grabbed the gun," he told Erie County Judge Susan Eagan. "I pulled the trigger and all the bullets came out. Unfortunately, Torriano ended up dying."

In asking Eagan to vacate part of Dixon's sentence, prosecutors said Scott had a long history of admitting his guilt.

"Mr. Scott has been confessing to this crime since Aug. 12, 1991," Assistant District Attorney Sara Dee told the court. "He has confessed to this crime in excess of 10 times."

Thomas Eoannou, Scott's defense lawyer, said his client agreed to plead guilty, and in return prosecutors will not oppose his request for a prison sentence that runs while he serves his current sentence. Scott has been in prison since 1993 and will not serve additional time in custody.

When Dixon appeared before Eagan an hour later, the judge announced that he would be released later in the day and Dixon's friends and family again erupted in applause. "Congratulations," she told him.

Wiping away tears, Barbara Dixon, Valentino's mother, said there were no words to describe her reaction to having her son home. Later, when asked what kept her hopes up over the years, she said, "My faith and prayer."

Sean Kirst: Dixon keeps promise to P.I. who helped set him free
'Greatest feeling in the world,' says man exonerated in '91 killing
With the help of his artwork, inmate seeks freedom
From 2012: Drawn to art, inmate pencils a world he has never seen
From 2004: 1991 slaying still raises questions

Dixon's daughter, Valentina, now 27, was still a baby when he went to prison, but she was there Wednesday with her 14-month-old twins, Ava and Levi.

For Dixon's lawyer, Donald M. Thompson of Rochester, the vacated conviction marks his fifth successful exoneration. And yet, he admitted that in those quiet moments before Dixon's appearance Wednesday, the significance of what was about to happen hit him.

"It never gets old," Thompson said. "This is what we go to law school for."

One of Dixon’s 1992 convictions was not vacated Wednesday. It was Dixon’s 9 mm Tec-9 – prosecutors described it as a machine gun – that authorities believe Scott used to kill Jackson.

Dixon was an “up-and-coming drug dealer” in Buffalo at the time of the shooting and Scott was his bodyguard, Erie County District Attorney John J. Flynn said Wednesday.

“Mr. Dixon is not an innocent man. Don’t be misguided in that at all,” Flynn said. “Mr. Dixon is innocent of the shooting and of the murder for what he was found guilty of, but Mr. Dixon brought the gun to the fight.”

The wrongful conviction investigation by the district attorney, led by chief investigator Joseph Riga, a retired Buffalo police captain who once led the department’s homicide and narcotics squads, included interviews with about 30 people.

Of those interviewed, 13 people – including Scott and Dixon – either implicated Scott or told investigators Dixon was not the shooter.

“I want everyone to be clear,” Flynn said, “while letting Mr. Dixon out today is the right thing, let’s remember who to really feel sorry for here in this matter.”

He was referring to Jackson, the teenager killed that night.

Students from the Georgetown University Prisons and Justice Initiative were also on hand Wednesday. They investigated Dixon's case and made a documentary that many believe helped in getting Dixon freed.

Martin H. Tankleff, an adjunct professor at Georgetown, called wrongful convictions “an epidemic in this country,” and noted that there were 160 exonerations last year. Tankleff was wrongfully convicted of murdering his parents and spent nearly 18 years in prison.

“While we incarcerate the innocent person,” he said, “the guilty people remain free to commit additional crimes which victimize our communities, which has to stop.”

When Dixon emerged from the courthouse Wednesday, he waded into the crowd of supporters and hugged everyone he recognized.

"Of course, it's injustice," he said when asked about his wrongful imprisonment. "We had to wait for the right people to come into office. It's not always popular to do the right thing."

Dixon said he wants to continue the pencil drawings that helped draw attention to his case but suggested there may be other, more important goals awaiting him.

"The fight isn't over," Dixon said Wednesday. "The hard work is ahead of me."