Vacco's tweet read: "Can you say fraud. Either it happened or it didn't. Why does the alleged 'victim' need an investigation?"

Blasey Ford insisted Tuesday that the F.B.I. investigate her allegations against Kavanaugh before she would testify before the Senate.

Vacco posted the statement, which was a reaction to a tweet by conservative commentator Ann Coulter, at 7:10 p.m. Tuesday. He deleted the tweet Wednesday morning after it created a firestorm of reaction from Twitter users.

Vacco, a Buffalo native, could not be reached to comment Wednesday afternoon.

Here is a screen shot of his original tweet: 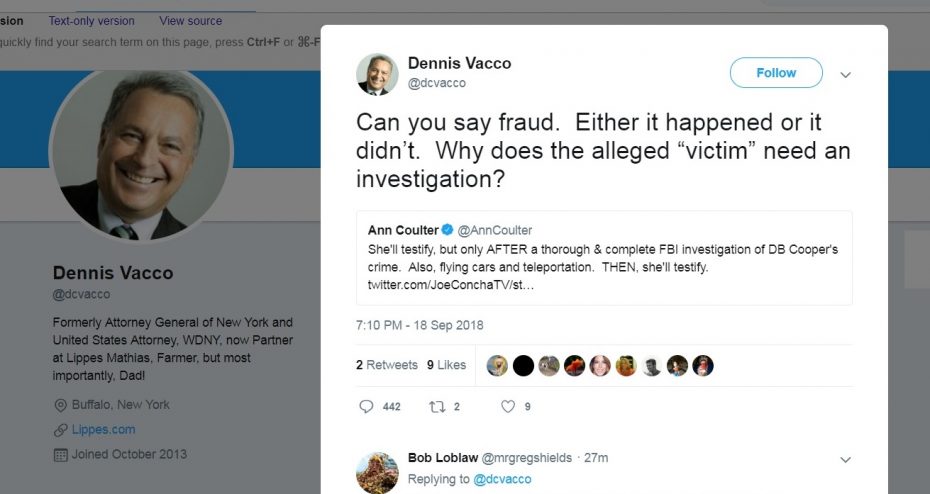 Screen shot of Dennis Vacco's since-deleted tweet. The screen shot was obtained through a cached link via Google search.

Many Twitter users captured the original tweet in a screen shot. The tweet was still available via Google search Wednesday morning – it could be accessed by clicking "cached" next to the link to the original tweet.

All of those tweets earned hundreds of replies as well.

One of Bharara's tweets, which read "This is a former NY State Attorney General asking why an alleged rape victim would want an investigation," was liked over 10,000 times.

you are kidding, right? Because she wants the truth out- no woman in her right mind would want this unless true…

This dude is a Former Attorney General of NY. Interesting the way he uses quotes around the word victim. And seems baffled why the victim would want an investigation. https://t.co/G97dUmMIkF

This is a former NY state Attorney General asking why an alleged rape victim would want an investigation. https://t.co/zWamhOvO1N

Vacco is currently a partner with the Buffalo-based law firm of Lippes Mathias Wexler Friedman LLP.

Many Twitter users tagged @LippesMathias in tweets critical of Vacco. A search for Vacco's handle and the firm's handle yielded tweets by more than 20 users.

@LippesMathias @dcvacco works for you? does he understand due process? Does he still work for you after that tweet? pic.twitter.com/c1UT6ZffYn