The Buffalo City Mission has seen the changes going on in the community.

On Wednesday, it became part of the trend.

Dignitaries and supporters of the Buffalo City Mission gathered under a tent in the back parking lot of the facility at 100 E. Tupper St. on Wednesday morning, celebrating the groundbreaking for what organizers are billing as a "one-stop" community center for Western New York's homeless.

In less than two years, that parking lot is set to be the site of a community room in the 75,000-square foot, $15 million community center that will expand and enhance the City Mission's services.

"The city of Buffalo is going through a renaissance and a rebirth, and so is the City Mission," said Aubrey Calhoun, the mission's associate executive director for development, public relations and volunteers. "It's going to provide preventative services to the entire community with a medical clinic right on site. ... We also will have an emergency shelter on the second floor, and our transitional housing program will have over 52 resident units for men who are willing and want to be able to get on the road towards self-sufficiency.

Construction on the four-story building will begin next month, with the project slated for completion in spring of 2020.

Calhoun said no guests of the mission will have to be relocated during construction. The current facility will be used until the new one is finished. It then will be razed and will become a parking lot. 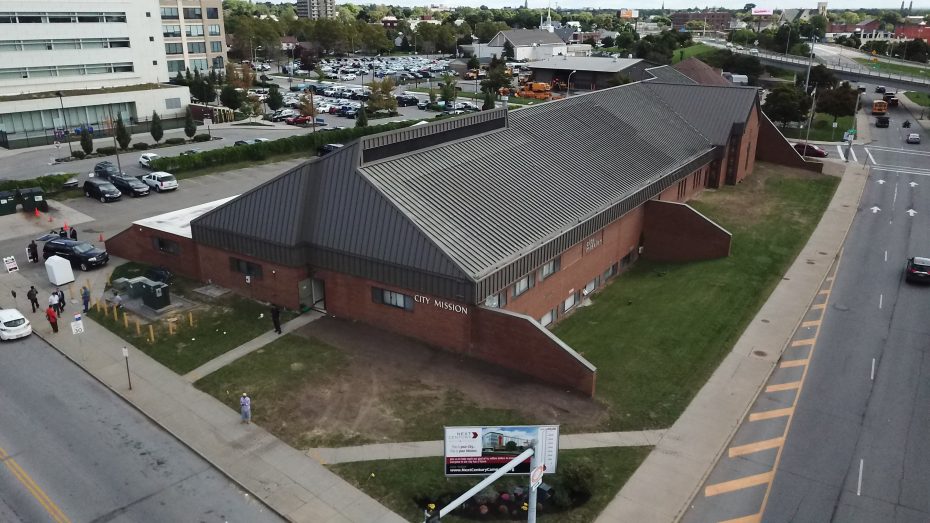 The Buffalo City Mission's new community center will be built in the parking lot next to the existing City Mission and the old one will be torn down and become the new parking lot. (John Hickey/Buffalo News)

Calhoun said the City Mission has secured $11 million of the needed $15 million and that "this year is the year" to complete the fundraising. With the organization celebrating its 100th anniversary, the fundraising initiative is titled "Next Century."

The four primary spaces of the community center will be:

* Emergency shelter: This will be a larger space than what the mission currently has, with enhancements of guests' health and safety.

* Transitional housing: Based on the City Mission's "DREAM Program," which is described as "an initiative to prevent homelessness through individual empowerment," there will be 52 units, a chapel, classrooms and a computer lab.

* Recuperative care: A facility, run in collaboration with health-care partners, will provide care for the physically and mentally ill following a discharge from a hospital. It will also include a community health care clinic.

The current City Mission building was built in 1983 and it is reflective of that, with Calhoun describing the design as "institutional."

The expansion will not only provide more space for all of the mission's current services, but will allow for the enhancement of those services.

"Come into our 92-bed emergency dorm, and that's really no way to care for people," said Stuart Harper, the City Mission executive director and CEO. "That's where it started, figuring out a way to upgrade our emergency shelter, and then we realized we needed to do something for men in our long-term program, too. We need to give them some space; there's no place for them to be alone. So we knew we needed to upgrade that."

A rendering of the dining area at the City Mission's new community center. (John Hickey/Buffalo News)