His father, Joseph W. Strobele, was a Buffalo firefighter but also worked side jobs to support the 10 children he and wife Alice Dudas Strobele had over 20 years and raised in a five-bedroom house on Duerstein Street. As his children grew up, Joseph Strobele recommended that civil service offered a reliable income.

Of the Strobele children – Sue, Cheryl, Joseph, Karen, Debra, David, Brian, Lori, Shelley and Michael J. – Brian was the first to join the Buffalo Police Department, in 1986. Four others followed in his footsteps; a couple joined the fire department, and others took other municipal jobs.

When he joined the police department, Mr. Strobele joined a cousin of his father's, Bill Strobele, who was a police dispatcher for 27 of his 31 years on the force. Bill Strobele became widely known as "Uncle Bill" after Mr. Strobele and three of his sisters became police officers.

Mr. Strobele was a graduate of St. John the Evangelist grade school in South Buffalo and a 1982 graduate of Hutchinson-Central Technical High School. He tried college, but it wasn't for him, so he began taking civil service tests.

He was offered jobs by both the Buffalo Fire Department and the United States Postal Service, but chose the police department, which he joined in 1986.

Early in his career, he was assigned to guard the City Hall office of then-Mayor James Griffin. On Sept. 5, 1991, he fought and subdued a 29-year-old man who aggressively confronted him in the office.

Mr. Strobele said at the time that when he told the man he would handle the complaint, "he got irrational and started swearing. He said he'd kill me and the mayor." The man was arrested and sent for a mental exam.

"We were kind of shocked when they offered it to him, because he was never political," said Giambrone. "He was a totally different chief than they had ever had, but that was just him."

When Mayor Byron Brown removed Mr. Strobele from that post without explanation in April 2010, the community was bitterly disappointed, Linda J. Freidenberg, president of the citywide Board of Block Clubs, said at the time.

Freidenberg called Strobele's demotion "a big mistake" and "a few steps backward in the development of good crime-prevention practices in Buffalo." Strobele returned to his lieutenant's post.

"Every block club in South Buffalo loved him," Freidenberg told The Buffalo News. "He went out of his way to help us."

Giambrone said her brother "was hurt, but he went back to what he loved, being out on the street. He wasn't kowtowing to anybody, and he wouldn't change his principles."

In notifying his colleagues of Mr. Strobele's death, Erie County Assistant District Attorney Ryan Hagerty wrote that Mr. Strobele "distinguished himself as an officer who was tough as nails when he needed to be, but never failed to use his abundant kindness and gentleness in his job, or in life. He was also extremely patient – both with suspects and with prosecutors."

On "countless occasions," wrote Hagerty, Mr. Strobele would wait in court for hours to be called during felony hearings "and never a complaint or even a sigh of exasperation would pass his lips. And of course, at the end of the calendar, when he was finally told that he wasn't actually needed, he would smile ear to ear and shake your hand."

Hagerty lauded Mr. Strobele for his "personal and professional legacy we should all strive for: diligence and discretion, toughness with kindness, and in all things, patience above all else."

Mr. Strobele retired from the police force in November.

"You'd never find anybody with a bigger heart," said Giambrone. "I've never heard anybody say anything bad about him; everybody loved him, and he had an amazing smile."

After childhood ear ailments that caused slight hearing loss, Mr. Strobele raised the volume of his voice, his sister said, adding to his dynamic presence. "He was louder than loud," she said. "But you could hear him. As a group, we're very loud." 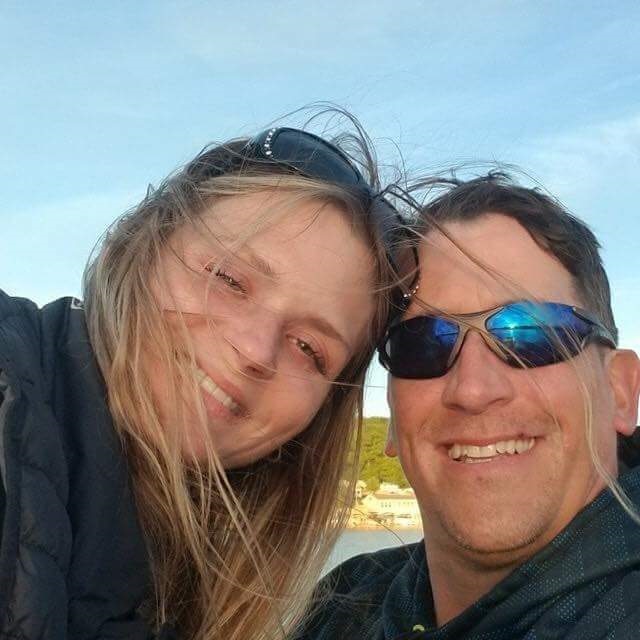 He enjoyed spending time at his cottage on Silver Lake, near Perry in Wyoming County, where he and wife Jesica Strobele, shown with him at left, enjoyed fishing and boating on the lake. He enjoyed travel, especially to Florida, occasional trips to casinos, and concerts, including many at Shea's. "He was just well-rounded," said Giambrone.

But he was happiest when the family was together, Giambrone said. "He liked nothing better than when friends and family would gather." In August, the clan had its first Strobele family reunion at his cottage.

He had a large circle of friends, and, said his sister, "he could go anywhere and fit in. He liked everybody, and everybody liked him."

A Mass of Christian Burial will be offered at 11:15 a.m. Saturday in St. Martin of Tours Catholic Church, 1140 Abbott Road. Memorial donations may be made to Mercy Flight.