The promise of a trail network from downtown Buffalo to Youngstown will be fulfilled in the next two years, thanks to a grant announced Tuesday by the Ralph C. Wilson Jr. Foundation.

A $6.5 million foundation grant, along with $23 million in state funding, will fill the gaps in the Niagara River Greenway, envisioned more than a decade ago as an unbroken trail along the Niagara River.

Officials announced the grant at a news conference in Devil's Hole State Park in Niagara Falls.

"This is a game-changing contribution from the charitable sector to support quality of life and recreation and economic development here in Western New York," said Andy Beers, director of the Empire State Trail.

Ralph Wilson "believed in physical activity," said David Egner, president and CEO of the Wilson Foundation. "He believed in people connecting to one another. He believed in everyday exercise and he exercised every day, right up until the end. Realize that Ralph believed in connecting people. Is there a better way to connect people than trails?"

The longest segment of the project — a 7.4-mile trail from North Tonawanda to Niagara Falls through the Town of Wheatfield — will be called the Niagara River Greenway Shoreline Trail. The state will pay $7.19 million toward that project, and the Wilson Foundation's gift accounts for $1.6 million.

A route along River Road has been chosen and the three communities agreed to seek funding together.

Now, almost all of the money is in hand, although some smaller state grants will be announced this fall, according to Beers.

The Wilson Foundation grant also will help pay for gateways to the trail network at Buffalo Harbor State Park; Young Street in the City of Tonawanda; the Erie Canal locks in Lockport; and Rochester.

"For five years I've been telling people we were going to close that trail gap, and I had no idea how we were going to do it," said Gregory D. Stevens, executive director of the Niagara River Greenway Commission.

Assemblyman Sean M. Ryan said "the promise of the Greenway" is coming true.

"We're well on our way to achieving that vision," said Ryan, D-Buffalo. 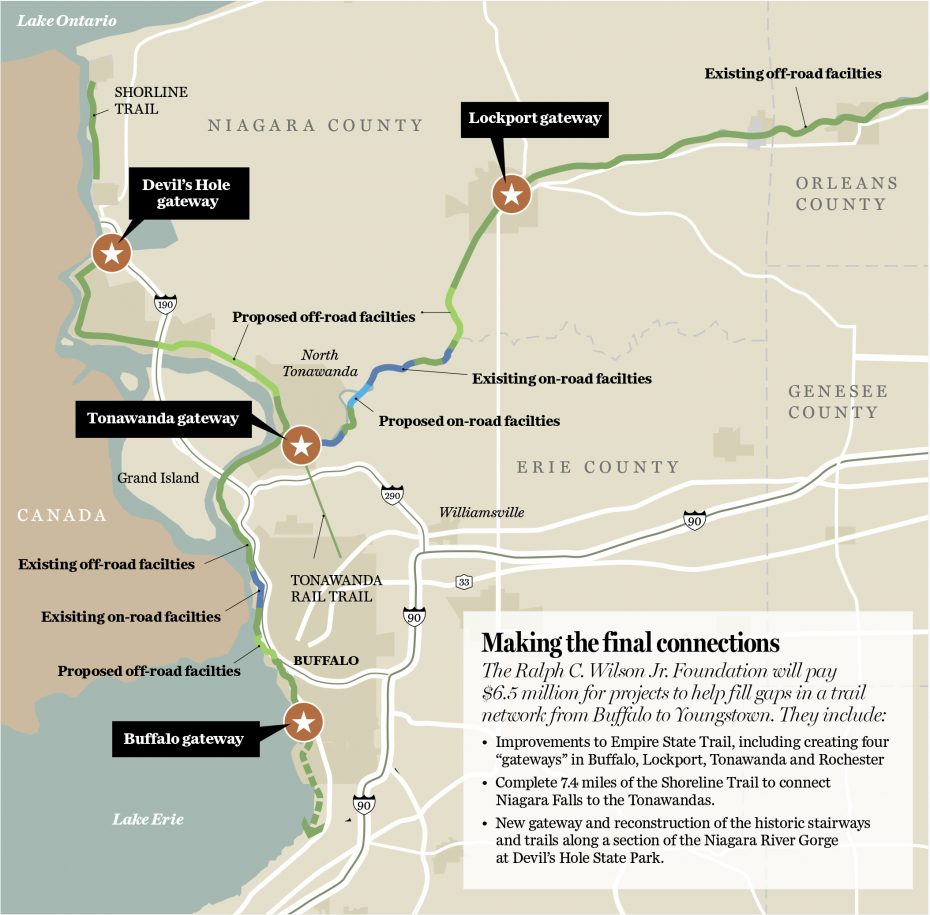 Beers said 20 miles of trail work in Western New York will be placed up for construction bids this year or in 2019, with work expected next year or in 2020. The later date is expected for the Niagara Falls-North Tonawanda segment, he said.

A gateway site at Buffalo Harbor will mark the beginning of a statewide 750-mile trail network, more than 400 miles of which is already complete.

Buffalo "is the place where it all began," said Rose Harvey, state parks commissioner.

The gateway site will begin the trail to Canalside, along the river and into the Tonawandas. The grants announced Tuesday will pay for improvements and new trails between Austin and Vulcan streets.

The gateway site will beautify one of Buffalo Harbor's less scenic areas.

"It's now a gravel field that was essentially a construction staging area," Beers said.

Work on trails and trail crossings also is on tap on Hertel and Busti avenues, Erie Street and near LaSalle Park.

The exact location and design of the Lockport gateway hasn't been determined, but Beers said it will definitely be placed on the north bank of the Erie Canal near the 19th century canal locks, called the Flight of Five, which has been partially restored to working order.

City of Tonawanda Mayor Rick Davis said the gateway site in his community will be placed at an intermodal hub where two existing trails intersect.

The Wilson Foundation grant and the state matching funds also will help pay for work to fill smaller gaps in the trail in Lewiston, Niagara Falls, Amherst and the City of Tonawanda.

"It's such a privilege for the foundation to be doing this work in collaboration with all the parties that are involved," Egner said.

In Devil's Hole State Park, Harvey said a new gateway and Niagara River Gorge trails will be added once the Niagara Scenic Parkway is removed in the next two years.

"This is really a dream. I'll be pinching myself all the way home," Niagara Falls Mayor Paul A. Dyster said.