“I’ve worn these pair of pants every single day for a week,” he said, riding in the back seat of a dark SUV along the I-190, the Niagara River to his left.

Simmons’ business partner Paul Janik, co-owner of the Johnnie Ryan soda company in Niagara Falls, was driving. Seated up front next to Janik was Terry Wills, Simmons’ press agent. She has been traveling with Simmons as he promotes his new book, his restaurants, and the Simmons-branded soda he is now producing with Janik’s company.

When Simmons mentioned his pants, Wills turned and smiled. “They stand up on their own,” she said.

The hulking, stiff-haired 69-year-old Simmons is most famous as a founding, face-painted member of the rock band Kiss, and secondarily as a media personality. But he is also a serial entrepreneur. Simmons is the co-founder of a restaurant chain, the CEO of a Canadian medical cannabis company, and now the face of a new line of soft drinks. He was in Western New York Thursday to promote that beverage, Gene Simmons MoneyBag Sodas, which is being manufactured in Niagara Falls by a Johnnie Ryan subsidiary, Rock Steady Sodas.

Simmons began his day in Niagara Falls. After chatting on morning radio, he and his small entourage had breakfast inside a Sheraton hotel, then loaded into a pair of SUVs for a day that would include television interviews, a boardroom meeting with a dozen executives at Delaware North, and an appearance at a 7-Eleven in Niagara Falls.

This was another in a days-long string of appearances for Simmons, who was wearing silver-studded boots and dark sunglasses that rarely left his face, a button-down with sleeves rolled to reveal a chunky silver bracelet, and those fitted leather pants. It was roughly the same outfit he wore earlier this week in New York City, and likely the same as he would be wearing again in Toronto the next day.

“I’ve worn these pair of boots every single day for a month,” he said, riding to one of his interviews. “Every once in a while I change a shirt. That’s it. Because who cares? The next place you’re going to, they’re seeing it for the first time.”

The entity that catapulted Simmons to fame – Kiss – is as much a brand as a band. Kiss has thousands of licensed products, from a line of Kiss Hello Kitty toys to a baby onesie that says “Rock & Roll All Night” on front and “Potty Every Day” on back.

Simmons, too, is an unabashed walking, breathing, shades-wearing brand. He has a home in Beverly Hills that he chooses to leave so he can go on television to talk about things like his new book, “27: The Legend and Mythology of the 27 Club,” which examines the stories of great musicians (think Jimi Hendrix, Amy Winehouse) who died at age 27.

He leaves so he can come to places like Buffalo and Niagara Falls, and appear on local television shows and visit a convenience store to autograph soda cartons. He still performs as well, and scoffs at the mere notion of relaxing.

“I don’t want to be too cornball about it,” he said, “but if God only gives you 24 hours of life, what are you going to do? Watch ‘I Love Lucy’ reruns?”

A lot of people do.

“That’s called a loser,” he continued. “Or you can go and make your mark. Create jobs. Help people. Do something. And then you die.”

Simmons tugged at the ends of his dark, wiry and stiff hair.

“Too much hairspray,” he said. “Actually, there’s never too much.”

Simmons is a philosophical guy who switches up sound bites about as often as he changes his pants. During his in-car conversations with The News, and his television interviews and his boardroom meeting, he echoed himself when talking about the value of hard work and discipline.

“I love people who are passionate about anything they do, because the American work ethic begins and ends with the people who created the new ventures that changed the world,” said Simmons, who was born in Israel and moved to New York City with his mother when he was 8. “I don’t mean that as kind of a popcorn-fart sugarcoated statement. Flight was invented in America, not by corporate America, but by two brothers who had a bicycle shop in Kitty Hawk. Come on!”

Simmons was getting almost evangelical, his baritone voice growing spirited as he gripped the wrist of the person next to him when he was emphasizing a point.

“The light that turned darkness into day, that lit the rest of the world, brought them out of darkness, was invented here,” Simmons continued, his voice growing louder over the GPS system guiding Janik as he steered through traffic. “The internet. Television. On and on. Telephone. Everything was invented here.”

The Janik family is his type of people: Their soda company, Johnnie Ryan, is a third-generation family business in the Falls. They make “vintage sodas.” Brothers Paul and Chris Janik, both ardent Kiss fans, met Simmons a couple of years ago at a fan convention in Cleveland. They struck up a conversation, told him about their business, left him with a card, and within days, Simmons called about working together.

“We’re not here to take down Coke and Pepsi,” Simmons said. “What they do is fine. We’re here to do something quality. And if we do it our way, Coke and Pepsi will line up and give us billions. We’re not concerned about anything else. When you run a race, run it your way. Don’t look over your shoulder, or to the left or the right to see how everybody else is doing.”

Philosopher Simmons is a master storyteller who knows how to drop in the details that stick.

Sharing his first entrepreneurial venture, at age 6 or 7 in Israel, he recounts climbing a hill with his friend Schlomo to pick cactus fruit, which they peeled and sold at the bus station. Young Gene – whose birth name is Chaim Witz – took in the equivalent of $1.50. On the way home, he bought his first ice cream, then put the rest in front of his mother. He lived alone with his mother; his father had abandoned them. “I’ll never forget what my mother said,” Simmons said, recalling his mother’s reaction to her son earning money. “ ‘That’s my big man.’ ” 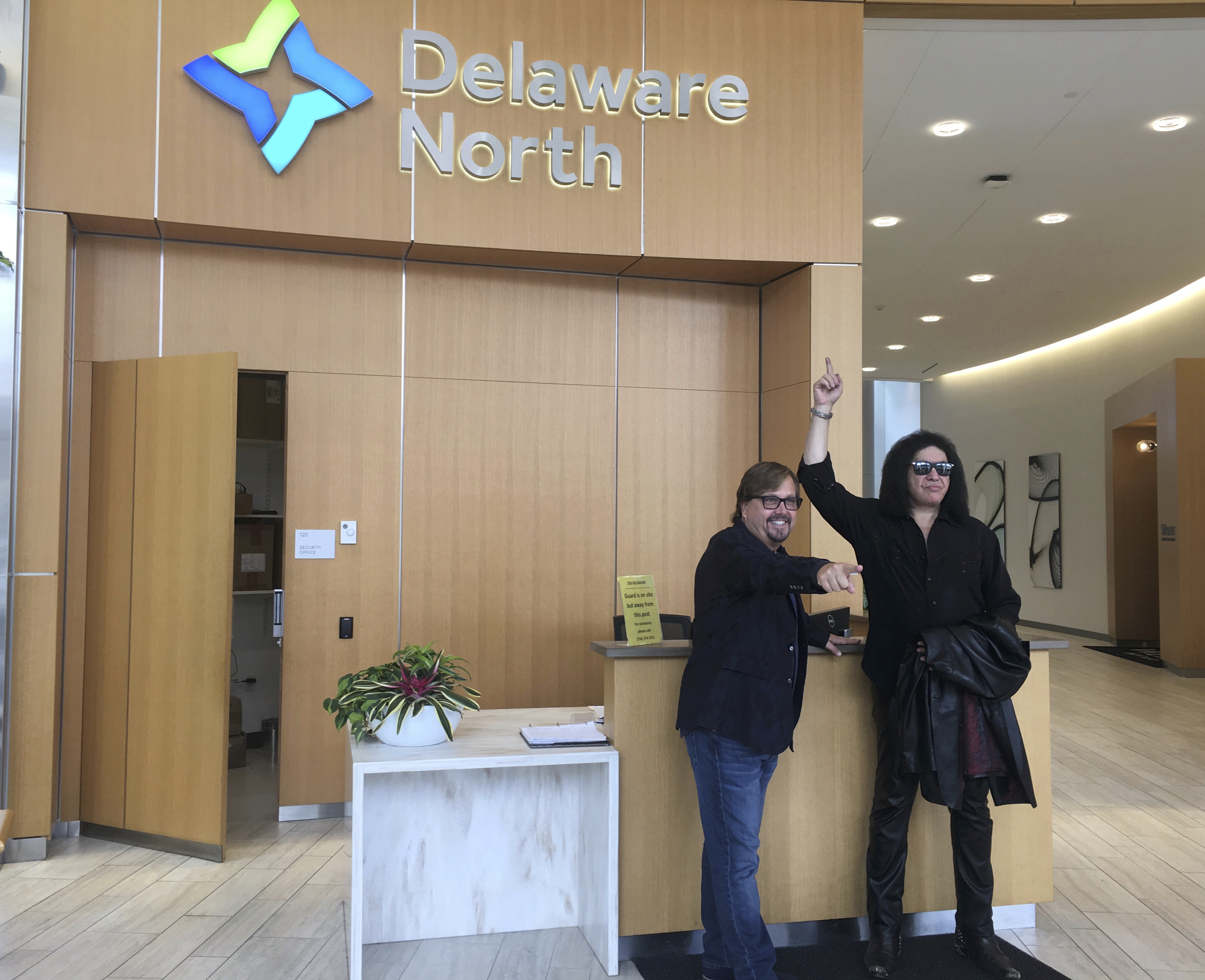 Simmons is still the big man; he knows it and acts it. After a morning of television interviews, he had a lunch meeting set up with a dozen senior and junior executives from Delaware North, the Buffalo-based hospitality giant. Simmons and his Southern California-based business partner, restaurateur and hotelier Michael Zislis, who flew in for this meeting, were pitching Delaware North on deepening their relationship with their restaurant chain Rock & Brews. Simmons and Zislis are partners in Rock & Brews, a chain of 25 restaurants, along with Kiss bandmate Paul Stanley and music-merchandising and licensing pioneers Dave and Dell Furano.

Inside the sunlit, top-floor conference room, Zislis, 52, played the SoCal-styled pitchman, wearing a sea-colored navy jacket, his button-down hanging untucked over his blue jeans. He stood in the middle of the room and talked about Rock & Brews food quality, financial options, existing arena deals and other fine-print details. “Casinos have done well for us, airports have done well,” said Zislis, whose own entrepreneurial roots date to age 13, when he started brewing his own beer.

“Arenas – I know you guys are in the arena space,” Zislis continued, referring to Delaware North's Sportservice division, and then launching into an explanation of how Rock & Brews landed a spot at San Antonio's AT&T Center.

Simmons, sitting at the head of the table with his glasses on, listened quietly while Zislis spoke. When Simmons talked, he tried to deliver the wow factor, offering to connect the Delaware North team with some of his high-powered business friends: Rod Baker, the CEO of Great Canadian Gaming Corp., and Belinda Stronach, a Canadian businesswoman whose company holdings include some of the continent’s best known horse-racing tracks.

“Thank you,” one of the Delaware North executives said politely. “Appreciate that.”

“Including the Dalai Lama and President Clinton,” Simmons continued. “You name it, we’ve got it. One-stop shopping.” 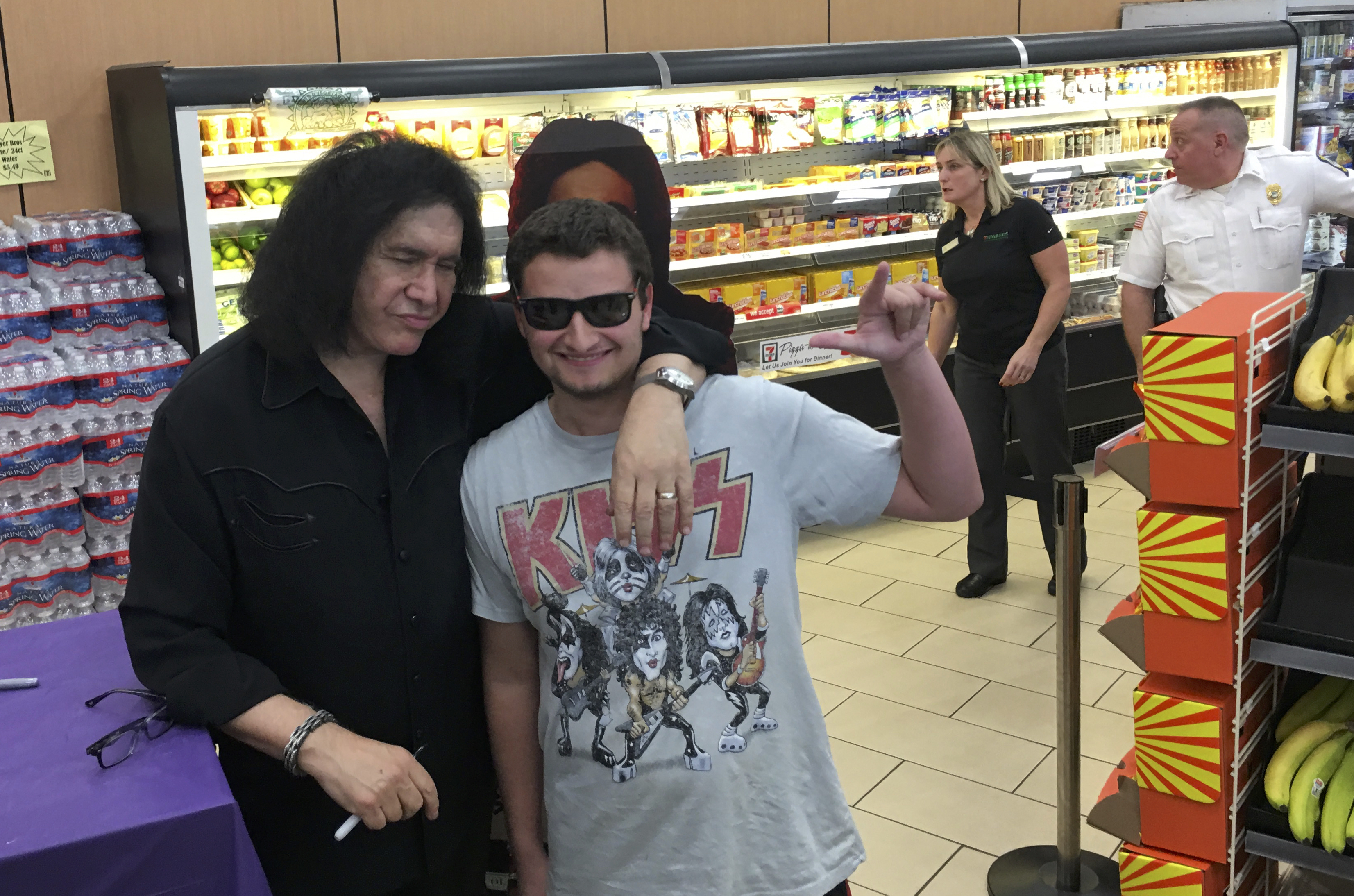 Simmons offered unsolicited feedback on the branding of Delaware North’s mixed-use development in Boston, The Hub on Causeway, which is being built in front of the company’s arena, TD Garden. “I don’t want to bug you too much, but I’m here to make you more money,” Simmons said, looking at a rendering of the development on a large screen. “ ‘The Hub’ is a big, good idea. Where’s the name?”

Simmons wanted to see the name clearly visible on the building. “You only get the respect you demand,” he said. “I like seeing it from far away.”

The goal of the meeting was to pique Delaware North’s interest in including more Rock & Brews restaurants at their sites. Simmons reminded them that he is a master marketer. “In terms of promotion, you can’t shine my boots,” he said, looking at his press agent Wills, who sat across the room, and then voicing what he knew she was thinking: “Be humble, Gene.”

He turned to the rest of his crowd. “She gives me the stink-eye when I tell the truth,” he said. “Nobody touches us. We’re committed. We roll up our sleeves. I flew here commercial to show up at a 7-Eleven at 2 o’clock in the afternoon.”

Later that afternoon, Simmons was indeed at the 7-Eleven, delivered in a classic car via police escort. Hundreds of fans gathered around the building; the first was in line at 5:30 that morning. Dozens of people peered through the windows of the store as Simmons met people who donated $20 to veteran-supporting charities to get an autographed four-pack.

Some fans babbled. Some were speechless. A few stuck out their tongues. So did Simmons. At least one bawled; Simmons embraced her. And as he met his fans – Simmons calls them “my employers” – he frequently took off the dark sunglasses and placed them on their face.

He’s the rock star, but he knows he can share. Simmons will be wearing those sunglasses again. And again.