After seven years in Chicago, Maura and Dan Devlin knew it was time to buy a house and commit to living in the Windy City — or move back to Buffalo, the city they would always call home.

It didn’t take them long to decide on the City of Good Neighbors, the place they were raised and longed to raise a family of their own.

“Our hearts were always here [in Buffalo],” Maura said. "We knew that we wanted to have kids and wanted to raise them near family.”

After living in the same house in South Buffalo her entire life, Maura, the Nardin Academy alumna, first moved away from the Queen City in 2004 when she went to John Carroll University in Cleveland.

She graduated in 2008 and began looking for public relations jobs. She wanted to be in Buffalo, but because of the recession, there wasn’t anything available. Maura ended up turning to Chicago, confident that the decision would help her career.

“I wanted to start in a big city so I could get that experience,” Maura said. “I knew there were more opportunities there.”

She began in the only intern position at the global public relations firm, Ketchum, and eventually landed a full-time job.

At the time, her husband (then-boyfriend) Dan Devlin was working in sales for a Buffalo-based company. His company agreed to him moving to Chicago and working from home, expanding their sales to the Midwest region. 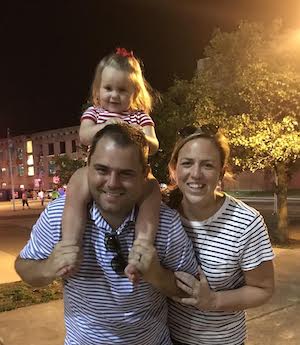 Maura, Dan and Annie Devlin at the July 3, 2018, Buffalo Bisons game, carrying on a tradition of Maura's family. (Photo courtesy of Maura Devlin)

Love most about Buffalo: The people; what it has to offer during all the seasons; Lake Erie; the revitalization

Missed most about Chicago:  Not needing a car; the Bills bars and the people they met there

The Devlins loved living in Chicago, but they always planned to move back.

Fortunately, an opportunity came up in 2015 that allowed Maura to continue working for Ketchum remotely, from Buffalo. And Dan remained at his Buffalo-based company, no longer having to work remotely.

Though they never thought they would live outside of a city, the Devlins eventually bought a friend’s house in Hamburg and love all the shops and restaurants the Southtowns suburb has to offer. 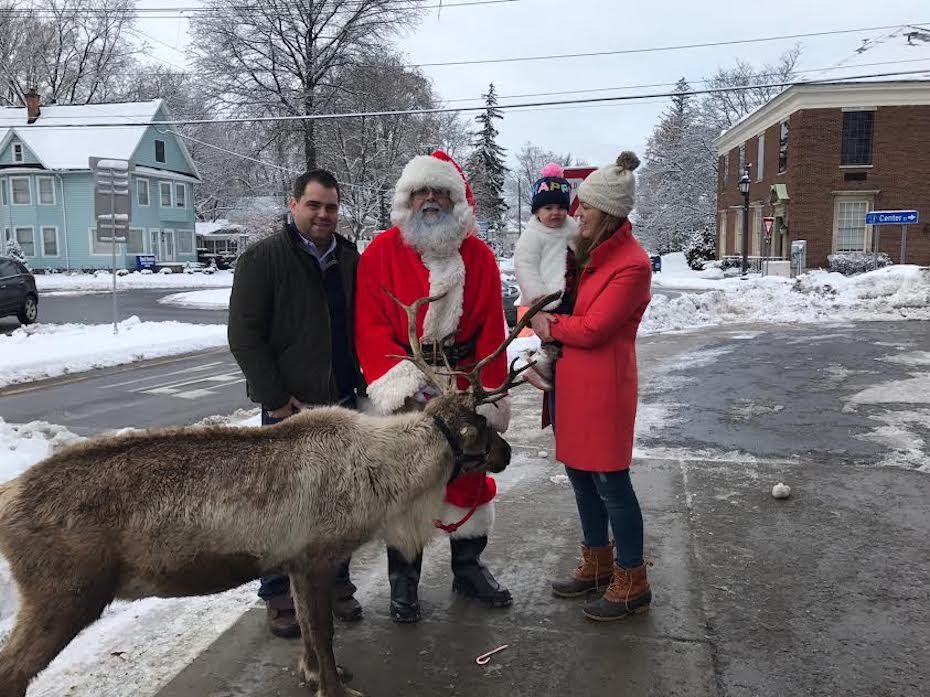 One of the many things the Devlins love about Hamburg: running into “Santa and his reindeer” while out walking through the village. (Photo courtesy of Maura Devlin)

And they are thrilled to be raising their daughter Annie, 2, in Western New York.

“I can’t even imagine having her in another city,” Maura said.

They are looking forward to rediscovering the Queen City with Annie, visiting all the different neighborhoods, the Buffalo Zoo, Bills training camp and spending time at Angola on the Lake like Maura did growing up. 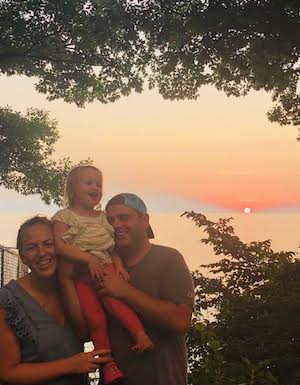 Maura, Dan and Annie Devlin at Grandview Bay at Angola on the Lake. (Photo courtesy of Maura Devlin)

One of Maura’s favorite childhood memories was being one of the first people to skate on Rotary Rink when it opened. Back then she skated with Mayor James Griffin; now she can’t wait to skate hand-in-hand with Annie.

Not only are the Devlins loving living back in their hometown, they are thrilled to be working new jobs in the Queen City.

Maura missed working in an office every day and eventually left Ketchum in 2016 to join Mower in public relations. She says that has brought a better work-life balance, giving her more time with her daughter.

She also is thrilled to be working on projects for the Queen City, like the marketing for the new Explore & More – The Ralph C. Wilson Jr. Children's Museum at Canalside.

“That was a goal of mine, to get to work on meaningful things like that for our city,” Maura said. “It’s a really special project.”

Dan is now working with the local private equity group Lorraine Capital, overseeing business development. He says he’s  enjoying seeing the results and the difference his company is making in the city, something you don’t get from living in a larger city.

“It's neat to be part of, to be really hands-on with what’s coming up in Buffalo,” Dan said.

The Devlins are not surprised by Buffalo’s recent resurgence. They say they are glad the world is now seeing what makes the city so unique.

“I think people that come from Buffalo can appreciate the fact that we always knew and thought our city was a special place,” Maura said.

Maura credits the Buffalonians who stayed and had a vision for the city for making the changes happen, especially at Canalside.

“I never could have imagined this, when I was little, that this could be here,” Maura said.

The Devlins say they appreciate their time living outside of the Queen City, but now that they’re back, they’re here to stay.

“Our roots are down and we’re not going anywhere,” Dan said.

Alison Russo grew up in the Southtowns and lives in a suburb of Kansas City with her husband, Joe, and their two children. She works as a freelance writer and public relations/marketing specialist.