Both his parents, Tom and Heather, ran at Canisius College and are in the school's Hall of Fame. Heather holds the Canisius records for the 3,000-meter, 5,000-meter and 10,000-meter races and was The Buffalo News' 1992 Runner of the Year. Tom is top 10 in multiple categories in the Canisius men's all-time record book.

His uncle, Ray, was a 1989 Monsignor Martin champion while running at St. Joe's Collegiate Institute. He went on to have a stellar career at Colgate University and still stands as the only All-American selection in the history of the program. Ray's been the director of track and field and cross country at Oberlin College for the past 15 years, winning seven NCAC titles.

Even his grandfather, the eldest Tom in the family, got into running in his later years.

You'd expect Tommy, now a senior, always knew the path he'd go down. But growing up, he spent his time playing another sport.

"Soccer was my passion," Tommy said. "Running was sort of secondary. But as time went on, I kind of started to realize my talent for running. I started to love it a lot more as I got good at it. I realized I can actually be really competitive at this."

"And genetics definitely helped," he said with a laugh.

"And he really loves it," said Heather, who ran in high school at Section V's Churchville-Chili. "We never pushed him to do it. He just wanted to do it and really liked it."

While Tommy succeeded early, he said it's been a gradual process to get where he is today. Part of that is the mental side of the sport, which often features long stretches in wooded areas, void of external motivation. With added experience comes an ability to cope with the ups and downs, especially when you're in many ways competing against yourself.

"I've definitely matured a lot more," Tommy said. "I've been able to accept shortcomings much more, as well as handle great performances with a lot more, not humility, but I take them more maturely and understand that not every race is going to be great." 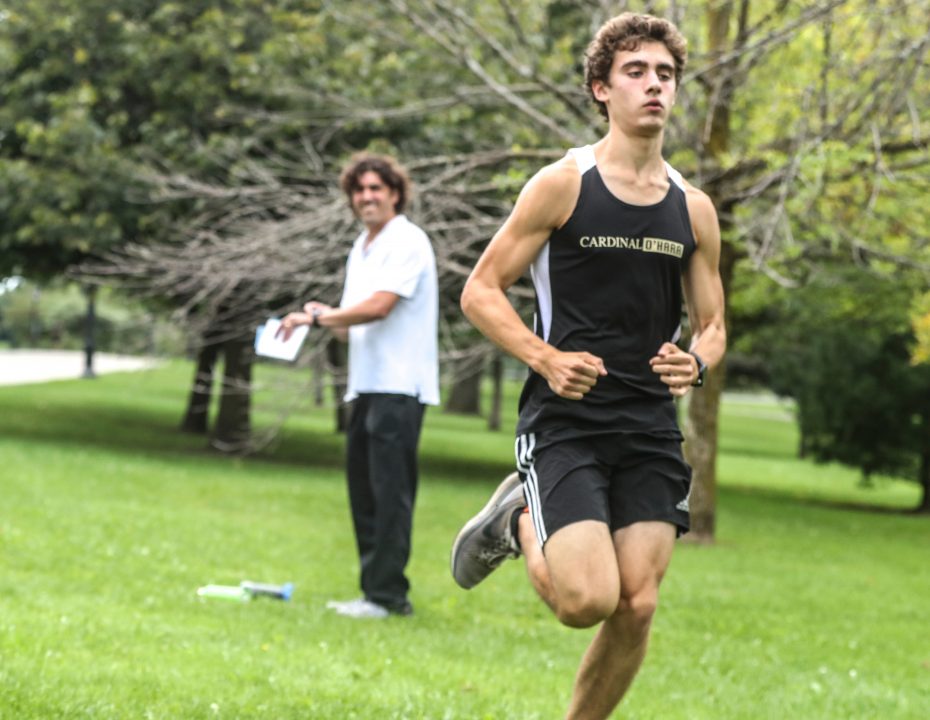 Tommy Appenheimer from Cardinal O'Hara is a two-time All-Catholic champion and was named All-WNY last year as a junior. (James P. McCoy/Buffalo News)

Then there's the strategy side of the sport, something Tommy spoke of at last year's muddy All-Catholics. He said after that race, hosted at Knox Farm State Park in East Aurora, his plan was to stick with the pack for the first mile-and-a-half of the 3.1-mile course and then take the lead from there. He ended up winning by 28 seconds.

Tommy set a personal record of 16:08.53 on Sept. 8, finishing first at the Red Dragon Invitational at Bemus Point Golf Course. Last Saturday, Tommy was bested by Lancaster's Armani Merlino, who finished in second at Bemus Point, in the West Seneca Invitational at Sunshine Park. It was a two-man race down the stretch, but Tommy couldn't catch up to the Legends senior.

He showed his ability to deal with defeat immediately after the race, shaking hands with Merlino and the finishers who followed the pair at the finish line. The supportive and tightknit running community was one of the aspects that drew him in back into running while in middle school.

"There's been times where you have Tommy cooling down with the Canisius team, Tommy and our guys cooling down with St. Joe's," Tom Jr. said. "Sometimes they're all hanging out. I'm trying to get him to do a cooldown and he's talking to the other guys, the three guys that beat him or four guys who he beat. But when that gun goes off they all want to kill each other."

Tommy is getting Division I interest as he begins his final year with the Hawks. He hasn't made a decision yet and wants to keep his options open, but has heard from many of the local schools, including the University at Buffalo, SUNY Binghamton, and of course Canisius, his parents' alma mater.

"I used to be stressed, very long term, am I going to not live up to my parents?" Tommy said. "Now, I'm more focused on myself and what I want to become."