If you're younger than 47 years old, you've never seen a September like this one.

The 71.1-degree first-half of the month is the warmest start to September since 1971, and sixth warmest on record.

Saturday's 86-degree high tied a 115-year-old record high temperature for the day. It was outdone Sunday by an 87-degree day, but that mark fell two degrees shy of the record high set in 1991. 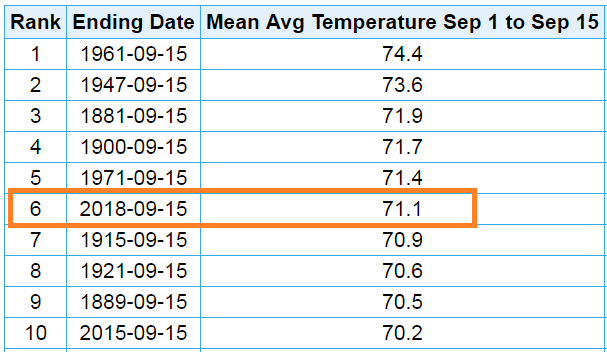 This was the sixth warmest first-half of September on record in Buffalo, and the warmest since 1971. (xmACIS2)

National Weather Service forecasts show above-average temperatures to persist this week, although it won't be as warm as the weekend.

High temperatures are forecast in the upper 70s every day except for a low 70s forecast for Wednesday. The average daily high temperature in Buffalo for this week ranges from 69 to 71 degrees. Overnight lows are mainly expected to be in the 60s.

The federal Climate Prediction Center also shows there's a 40 percent chance for the Buffalo Niagara region to stay above normal next week.

Forecast models still show there could be an infusion of much colder air as the month ends and October starts.

It's hot now, but models show a drastic turn by month's end

In case you're wondering, the Buffalo Bills start in 1971 was just as cold.