Bomber pilot Herman Pawlicki served in the U.S. Army Air Force, where he flew 23 bombing missions on factories, rail stations and airfields in Austria and southern Germany – including a strike on “The Berghof,” Adolf Hitler’s vacation retreat in the Bavarian Alps.

Pawlicki fought in World War II much the same way he led his life – with common sense, determination and a razor-sharp sense of knowing right from wrong.

Pawlicki, 97, is a widower after 72 years of marriage. He and his wife lived in Elma, where they raised two daughters.

He was born and raised in Sherrill, a small town between Syracuse and Utica that is the headquarters for Oneida Limited, the silverware giant founded in 1880 as Oneida Community Silverware.

After he graduated from Sherrill High School in 1939, Pawlicki worked at Oneida with his father and brother, but he was determined not to be there very long. He met his future wife during one of his weekend trips to Buffalo to visit another brother who attended Canisius College.

With gas costing 19 cents a gallon, Pawlicki recalled making many trips in his 1938 Chevrolet – until one event would guide his future.

“The Japanese had just bombed Pearl Harbor,” Pawlicki said. “Someone heard it on the radio. We knew ships were hit and soldiers were dying. My buddy and I decided we’d leave the next day for Syracuse, the nearest recruiting station.”

A long line of like-minded young men greeted Pawlicki at the Syracuse post office on Dec. 8, 1941.

After 65 years, she learns she exists because Kenmore man rescued her dad Sat, Feb 1, 2020

Only if you press Ted Yochum will he describe how he swam toward a weakened man in deep water, a guy who had been clinging to an empty can of gasoline for at least 45 minutes.

WWII nurse, now 98 and living in Williamsville, awarded France's Legion of Honor Mon, Dec 23, 2019
Purple Heart recipient, 96, to be honored: 'I get around in pretty good shape' Thu, Nov 14, 2019
Vietnam War didn't end for Perrysburg soldier after he was shot Mon, Nov 11, 2019
In Dunkirk, a farewell to one Korean War soldier, an ongoing vigil for another Sat, Oct 19, 2019
'Miraculous closure': Eulogy for Korean War soldier whose remains were returned after 69 years Sat, Oct 19, 2019
WNY veterans cemetery to encounter yet another delay Wed, Oct 9, 2019
After almost 70 years, a soldier is coming home from Korea Mon, Oct 7, 2019

“When I graduated from flying school, they made me a flying instructor, but when I saw there were openings for B-24 pilots, I decided to get in on the war work,” he recalled.

After three months of additional training in the mountain conditions of Idaho, Pawlicki was assigned a plane and crew in Topeka, Kansas, where he began the trans-Atlantic journey to Spinazzola in southern Italy. He flew 23 missions. Mountain headwinds often slowed the eight- to 10-hour missions over the Alps. His missions took him into Austria and southern Germany.

On each mission, his plane came under fire from enemy fighter planes and mountain snipers, he recalled.

When stationed in Spinazzola, Pawlicki recalled being assigned to guard duty after his commanding officer found a photo of his first child mounted on the fireplace that heated the sandstone huts that served as barracks.

“He didn’t want any photos. ... If I can’t show a picture of my baby, one of the reasons we’re over there, I thought the heck with him,” Pawlicki said. 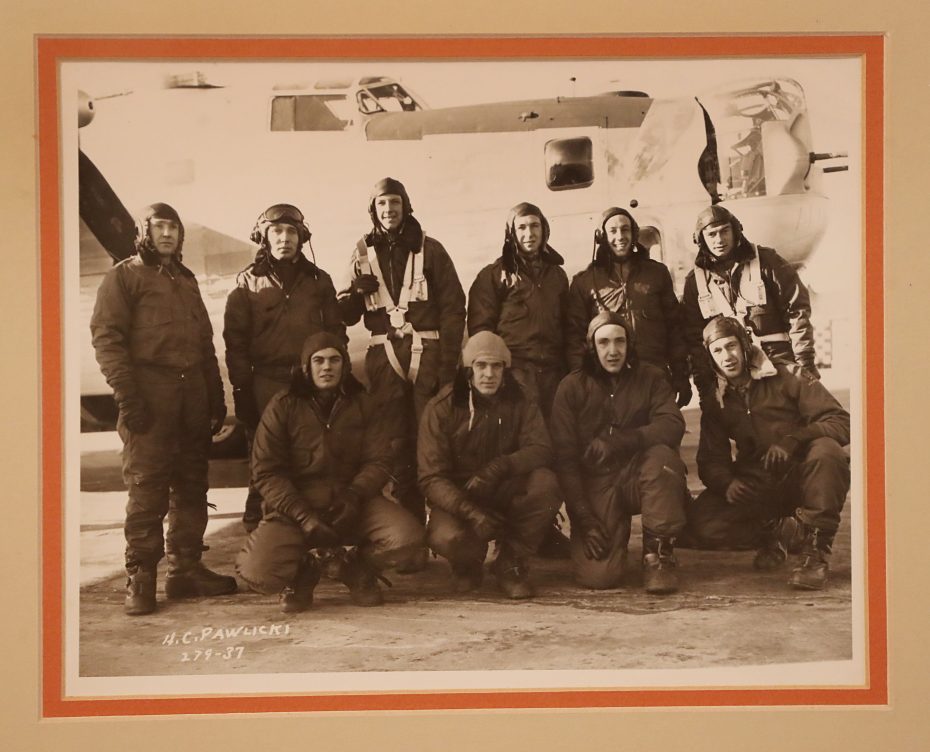 Herman Pawlicki, second from left in the front row, poses with his crew in front of the B-24 bomber he flew during World War II. (Sharon Cantillon/Buffalo News)

After the war, Pawlicki worked 27 years as a tool and die maker at Trico. He was active in the union until he retired and moved briefly to Arizona.

He outlived three brothers and much of his family. His wife was 92 when she died in 2015.

Other than some bad cartilage in his knee, Pawlicki’s health is good, he said. He bakes pies, makes golabki and drives a 2004 Ford Explorer with only 25,000 miles on it. Photos of his granddaughter fill his dining room where a sewing machine shares space with a wall of wartime memorabilia. Pawlicki sews uniforms for VFW Post 5861 for Elma, Marilla and Wales, where he is a member. He also is a member of East Aurora Post 362 – The American Legion.

Pawlicki is fiercely loyal to the country and the American flag. He has more than one flag flying at his home, and he expects others to do the same.

“If professional football players have something that bothers them, let them find another form of protest,” Pawlicki said. “Don’t kneel during the anthem or when the American flag is flying. Honor it.”