Travis Yost has been involved in the world of hockey analytics for a decade and is a part of TSN's Hockey Analytics team. Prior to joining TSN, Travis was a contributor at the Ottawa Citizen, the Sporting News and NHL Numbers, and has been a consultant for an NHL franchise. He will be contributing breakdowns on the Sabres for The Buffalo News this season. Follow Travis on Twitter: @travisyost.

Last week, I argued that the pairing of Jack Eichel and Jeff Skinner on Buffalo’s top line was the most logical of choices for head coach Phil Housley. Their skill sets are awfully complementary, and for a team in dire need of offense this year, it would arm the Sabres with at least one quality scoring unit.

Being competitive would be a welcomed step forward for the Sabres organization. Since the 2014-15 season, only the Arizona Coyotes have amassed fewer points. And while the Sabres have failed in most every part of the game over this tumultuous run, a lot of their struggles circle back to the league’s worst 5-on-5 offense – one that’s averaged just 1.8 goals per-60 minutes, over the last four seasons, comfortably dead-last in the National Hockey League.

But the addition of Skinner won’t unilaterally address what has become a core issue for Sabres attackers – an inability to sustain significant offensive zone time and an inability to attack the heart of the defense.

Last season, Buffalo did what Buffalo usually does. They struggled to generate shots up and down the lineup, and in the instances that they did, they usually came from less dangerous scoring areas. If you look at every team’s shot performance from last season, you can quickly understand why the Sabres were so punchless. Both shot volume and shot quality were hugely in lag from league averages: 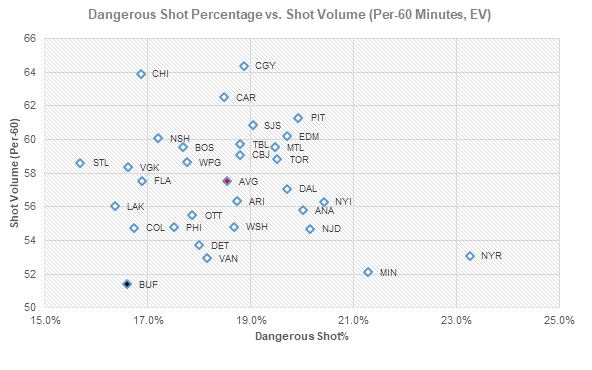 No team generated fewer shots than the Sabres at 5-on-5, which is a killer when it comes to goal production. Shot volume remains strongly correlated with scoring rates, and that measure in and of itself could probably explain why the Sabres offered so little in the attacking third last year.

But what compounds the issue is the shot quality piece. I mentioned earlier that the Sabres had an awfully difficult time piercing the interior of most defenses last year.  If you take into consideration the location of shots, including both distance and angle, you can see that Buffalo’s offense was probably even less effective than first imagined. Only 16.6 percent of Buffalo’s shots last year came from what we consider to be "dangerous" areas of the attacking zone – at a high level, you can consider this to be the "home plate" area in front of the opponent’s net. That’s two full percentage points lower than the league average, which is a problem. Doubly so if you aren’t getting into the offensive zone with any type of consistency.

This made me wonder what the Sabres looked like at the individual level, particularly heading into the 2018-19 season. We know there are an awful lot of forwards in the lineup who either have little or no NHL experience – players such as Casey Mittelstadt and Alex Nylander saw a handful of games last season, but expect to take on larger roles starting in October. Still, there are a number of veterans either returning from last year or coming in from another franchise. And from there, we can look at how each player looks as it pertains to both shot rates and the quality of those shots during the 2017-18 season. 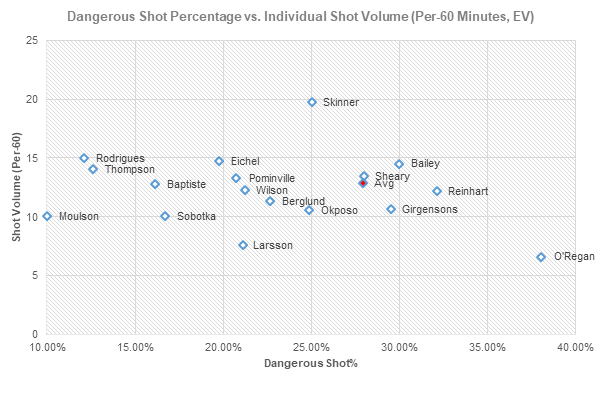 Not surprisingly the numbers at the individual level are pretty collinear with what we saw at the team level. Shots from Buffalo forwards were generally less dangerous than shots from other forwards around the league, and that was true throughout most of the lineup. And that includes superstar centerman Jack Eichel.

There are a few interesting takeaways here. One, Skinner obviously looks fantastic. I wrote about this a bit last week, but Skinner’s reputation as a mega-shot volume guy is accurate, but it also implies that he trades in quantity for quality. And that simply isn’t true. About 25 percent of Skinner’s shots last season – on a comparably bad Carolina team – were considered dangerous, which is just a tick less than the league average.

Two, Zemgus Girgensons remains a bit of a mystery. If you looked at just volume and quality, you would think Girgensons was one of the more effective attackers on the team. But he’s posted three consecutive years of substandard production – he managed just 15-points in 71-games last season on a base of 6.2 percent shooting. You can make quite a living as a depth forward if you can consistently play in the offensive zone and apply pressure to opposing goaltenders, which Girgensons appears to do reasonably well. But if you can’t score on those opportunities, your ice time will remain suppressed. Make or break year for him.

Three, Conor Sheary – the other Buffalo summer acquisition – should provide real offensive boost. He’s a lightning quick winger that made him another dangerous weapon in Pittsburgh. His speed was so effective that Mike Sullivan continuously played him inside of the Penguins top-six, usually running with the likes of Sidney Crosby and either Patric Hornqvist or Jake Guentzel. There should be no doubt that Crosby, like most elite centers, juiced Sheary’s numbers to some degree. The question is how much. We are still talking about a guy who scored 18-goals last year, and you have to apportion some of that credit to a guy who is consistently forcing defenses into awkward, hard-to-defend situations.

Lastly, don’t discount what blue-liner Rasmus Dahlin could do for this team. Most elite attacking teams in the NHL have at least one high-end puck mover who is capable of carrying through the neutral zone or distributing north-south passes on the fly to skilled forwards. Buffalo has never had a piece the caliber of Dahlin on the back end. And, quite truthfully, they need him to be as good as advertised in year one if they want to seriously compete this season.