The Josh Allen era officially began this week as the young rookie guided the Bills for the first time as the starter. Chargers quarterback Phillip Rivers, however, was the star of the show in completing 85 percent of his passes for 256 yards and three touchdowns.

The Bills offense struggled early in the first quarter, ultimately giving up five sacks in a 31-20 loss. Buffalo executed better as a team in the second half closing the 28-6 halftime gap. The effort was apparent in New Era Field, but the execution in each phase of the game fell short.

Every throw from Josh Allen's first start with the @BuffaloBills! #LACvsBUF pic.twitter.com/Nv4c787Yps

What is the biggest difference between college and professional football? Speed. The amazing rate of speed through which the game occurs combined with the size of the players is beyond the imagination. And much like preparing to take a walk on the moon, the training for such an endeavor cannot fully replicate actually being there on the moon.

Allen was experiencing this difference against the Chargers in his first start as a Buffalo Bill. All the mental preparation, all the simulations he went through did not adequately prepare him for the actual experience of executing at this NFL rate of speed. The greatest challenge for quarterbacks at the NFL level are protections. I witnessed this first-hand watching Peyton Manning. Successful NFL quarterbacks must be able to identify protection problems and either adjust the call at the line of scrimmage to account for the blitzes, or they must know who is “unblocked” and distribute the football to the “hot” receiver before the defender sacks them. This is extremely tough duty, in particular for younger players who have not seen the variety of defensive looks, or had to operate an offense under such hostile conditions. 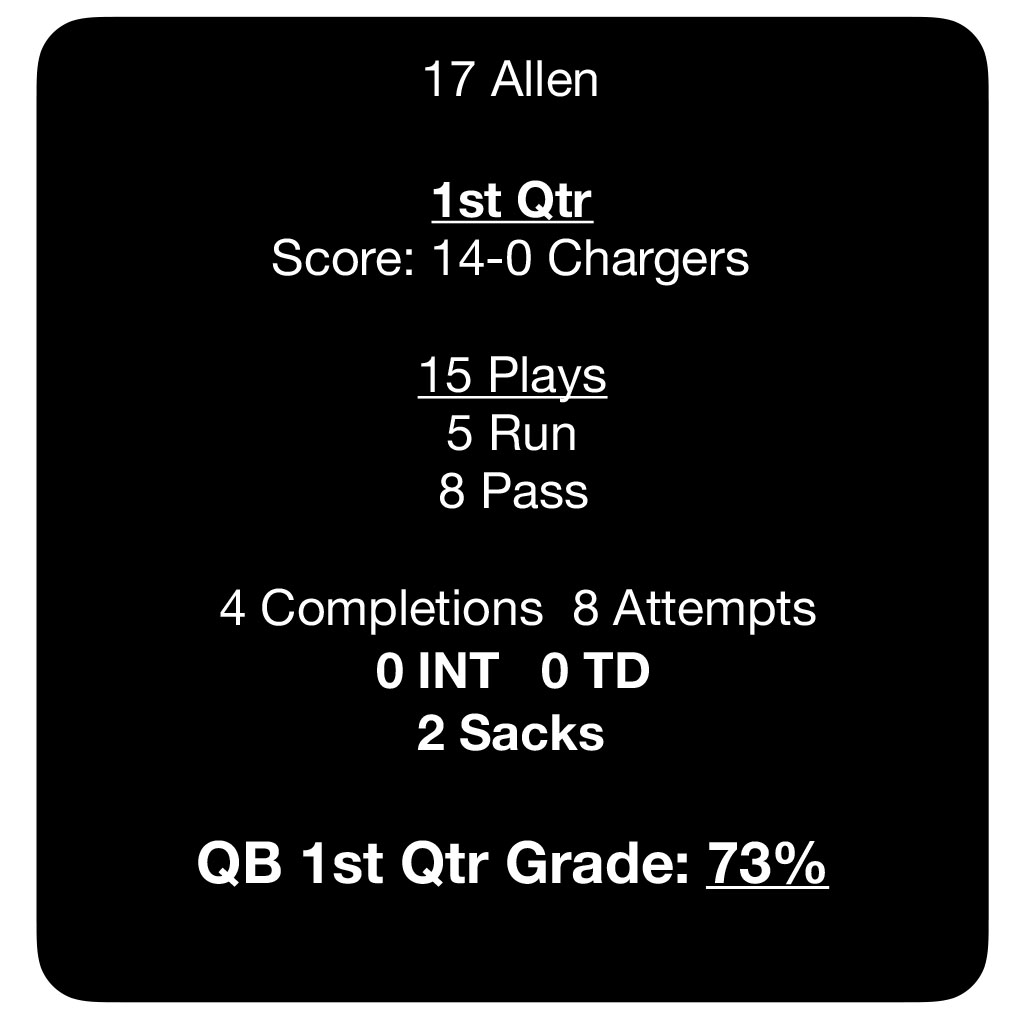 The first sack on Allen occurred on third-and-7 on the third play of the game. The Chargers ran a disguised “zone blitz,” meaning they lined up in a four man defensive front and dropped one of the defensive lineman into zone coverage. This fooled the Bills as the Chargers then blitzed the weak linebacker, creating a four-man pass rush. The Bills offensive line committed to the defensive lineman rushers, but not to the linebacker, which made Allen shuffle to his left in the pocket. Theoretically, Buffalo had enough people in their protection scheme to block all four rushers, but the Chargers’ design affected their execution. Allen was sacked without any ability to attack the blitz.

The second sack came two plays later when the tight end was motioned from left to right and the safety ran across the formation with the motion man. This defender
blitzed as Allen was trying to hand the ball to LeSean McCoy. Allen wisely sensed the free rusher and curled up to protect the football. This was another situation where the Bills were surprised and unable to react to the blitz.

The third sack was another four-man rush as Buffalo had a “bunch” formation to Allen’s right. Typically, the quarterback’s eyes would be on the bunch side of his progression reads but for some reason Allen’s focus was on the single receiver side. The defense rush wore down the Bills protection as Allen missed the open “curl-flat” combination to the bunch side. This processing error led to the eventual break down of pass protection resulting in the sack. 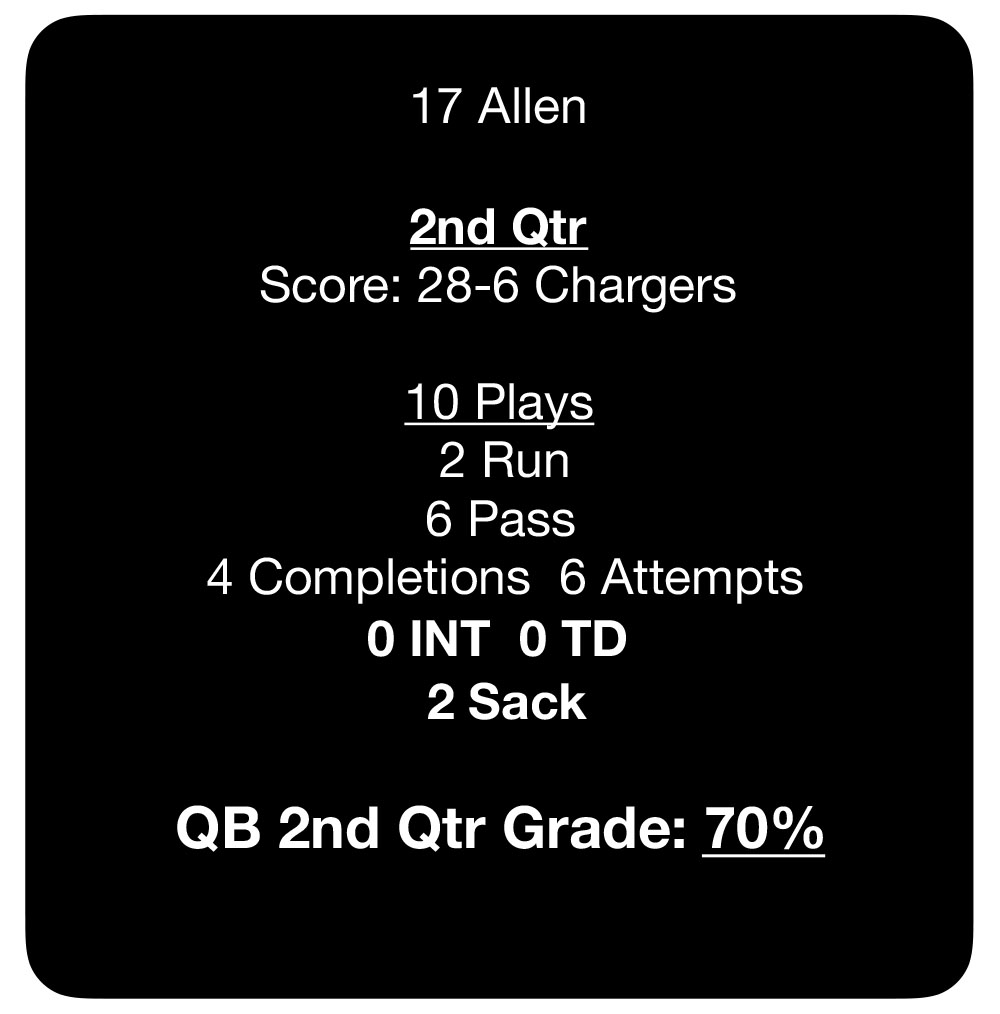 The final sack of the first half came on another third-and-7 play, with 53 seconds remaining. The Bills were on a drive and had the ball on the Chargers’ 15. Getting points in this situation was critical with the game close to being out of hand. Los Angeles loaded up the left side of the Bills’ offensive line with four rushers, ultimately blitzing three of the four. This created more pass rushers on the left side than Buffalo had blockers. Not only could the sack have taken the Bills out of field goal range, but it kept the clock running and forced Buffalo to use a timeout to kick the field goal. This was definitely a processing error as well as a poor decision by the young quarterback not to throw the ball away to stop the clock. Fortunately, they had the timeout to use.

It was quite evident that Allen was unsure or unaware of the “unaccounted for” players who were blitzing. This is an area where the young quarterback will need to spend a great deal of time growing and developing his ability to get rid of the football on time. Quarterbacks in the NFL must be knowledgeable and aware of their protections and be capable of throwing the “hot” or “sight adjustment” routes built into their offensive schemes. They must be able to attack the voided areas defenders are rushing from and be capable of progressing through their reads fast enough to avoid catastrophic sacks.

These types of plays are drive killers and are demoralizing to any offensive unit.

Defenses mostly play “man” behind blitzes, as “man-to-man” coverage erases huge gaping areas that blitzes create. This has changed over the years with the invention of the “zone dog,” a theory of playing zone behind a blitz, by dropping a defensive lineman into space. In any event, the quarterback’s job is to see the blitz, process the information, and counter attack. These are the moments in which quarterbacks see the “one-on-one” matchups or hit the built in “blitz control” routes in order to counter the aggressive nature of blitz. 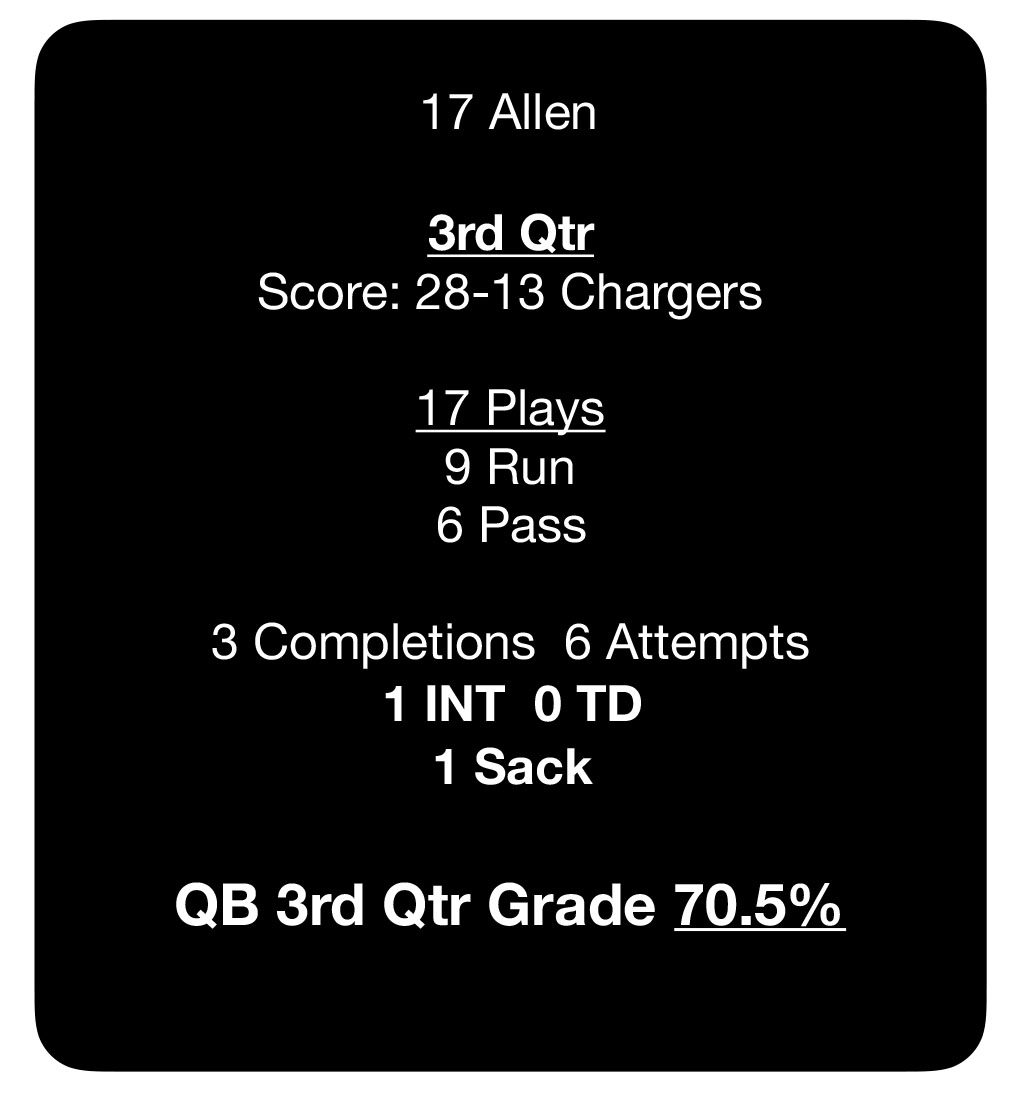 In the third quarter, with the score 28-13, Allen was on a drive that potentially could have put the Bills within eight points of the Chargers. On first-and-10, the Chargers had a “stacked” defender relationship to Allen’s right side. This signals that one defender is in position to rush with another defender stacked behind him to play “man” on the offensive player they are lined up over. This is a classic defensive posture and the quarterback must see and process this information. If he does so correctly, he throws into the flat immediately nullifying the blitz and attacking the soft man coverage. This didn’t happen as Allen was caught off guard and took the sack trying to scramble. This is an absolute must “hot” throw that quarterbacks across the league make on a routine basis.

Allen’s five sacks indicated that things were happening too fast and he was not quite able to process the information. Processing this information is critical as many defensive alignments can send the quarterback signals as to what the defense is doing. For example, a cornerback lined up inside of a wide receiver may indicate “man” defense. A safety standing on the line of scrimmage indicates a safety blitz. A “bear” defensive front, the alignment in which the offensive guards and center are covered by defensive linemen, also indicates a blitzing posture. All of this significant information is studied in great detail each week and is vital to the quarterback’s split-second decisions. He has to mentally decide where to go and why. He also must have the physical tools to make these pressured throws.

The mental processing and the physical play-making ability are what separates good from great or winning from losing. This was what made Peyton Manning one of the best to play the game. His unique ability to process information and adjust was extraordinary. 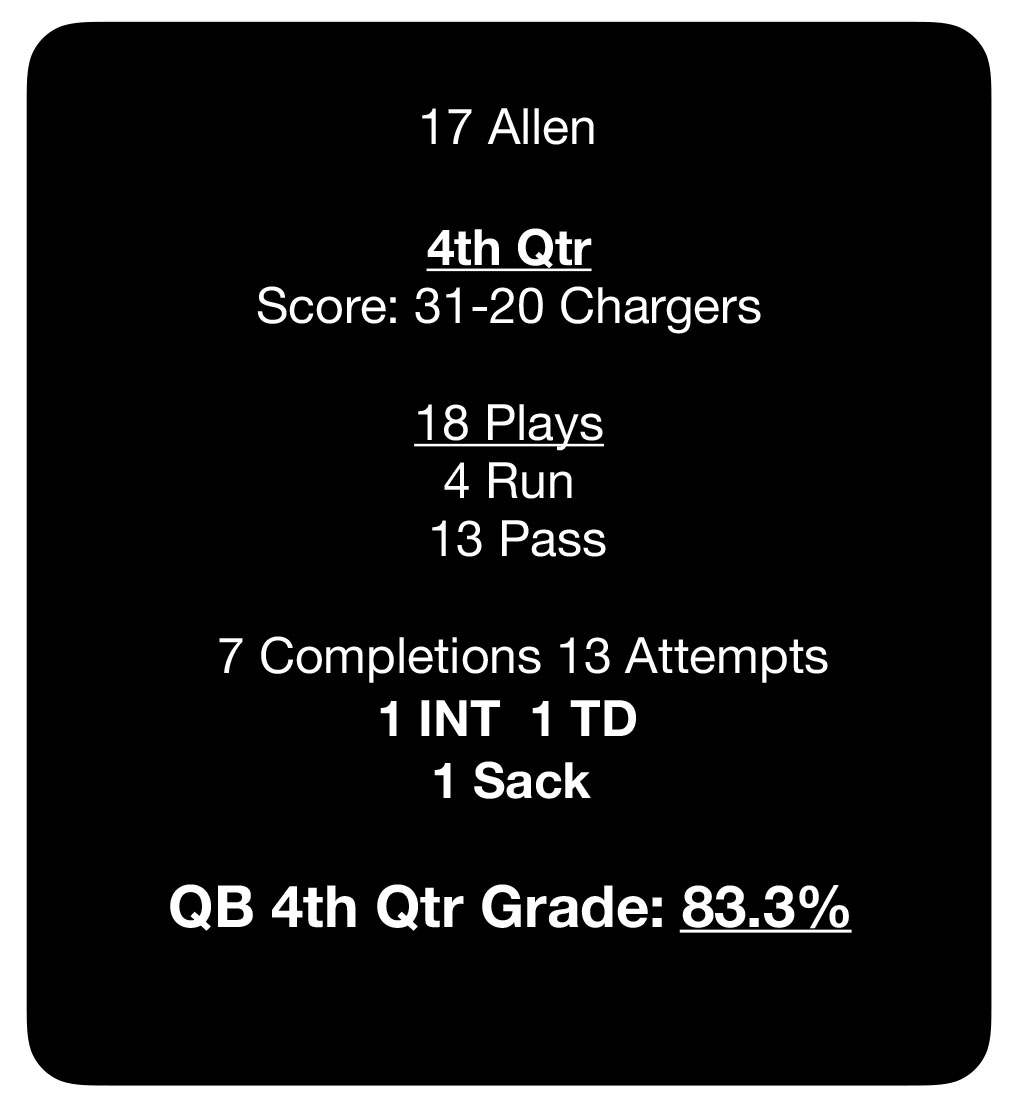 Offensive Coordinator Brian Daboll is trying to find the level of Allen’s processing ability. It would be significantly easier to develop Allen if the Bills had a great running game. This would take the pressure off the quarterback, forcing defenses to commit to the run as the priority. Daboll understands this and to his credit has not abandoned the run even with the lack of production. He understands that an imbalance puts the young quarterback in the overwhelming position of having to carry the load; changing protections and changing plays, which requires a great deal of coordination, much like we saw from Rivers. This high level efficiency only comes from one thing ... experience.

Forget about wins and losses and try to remember your first day on the job, and how much better you were one, or two, or three years later doing that same job. The answer is that with time, hard work, discipline, and experience Allen is going to improve exponentially in this critical area. Processing takes preparation, anticipation, and experience.

Growing into a NFL caliber signal-caller who can efficiently know what to do and when to do it at the line of scrimmage doesn’t happen overnight. It takes years to master the speed and complexity of the game.

The question that is most intriguing from a coaching perspective, one that Daboll will ultimately have to answer is this: What does Allen do really well, and how can the Bills take advantage of this ability.

In the midst of a 31-20 loss, the Daboll finds himself in the unenviable position of compensating for inexperience and inconsistencies, two huge holes that
are difficult to fill. Sometimes less is more. Sometimes less volume promotes more consistency. Sometimes having less to check to or worry about allows players to just play and process faster. Tony Dungy’s philosophy heading into Super Bowl XLI was exactly that principle. Dungy removed many of the Colts’ defensive checks and adjustment calls heading into that game against the Chicago Bears because he wanted his defense to play faster. He wanted them to process and diagnose quicker. His theory worked as the Colts won Super Bowl XVI.

It will be very interesting to see how Daboll adjusts to Allen and how he can protect the quarterback from having to do too much too soon. The Bills’ success
this year depends on it.