It can happen, one ugly loss leading to another.

Confidence is shaken to the point of no return. Too much focus on what just ran over you rather than on that next semi coming your way.

It happened to the Buffalo Bills last season. In consecutive weeks in November, the New York Jets, New Orleans Saints and Los Angeles Chargers rolled them by a combined 135-55. The worst of those was the Saints’ 47-10 beat-down at New Era Field, followed a week later by the Chargers’ 54-24 pummeling in Los Angeles (a.k.a. Nathan Peterman’s Pickfest).

“It snowballed on us each time,” linebacker Lorenzo Alexander said.

The Bills recovered from the Chargers disaster with a win at Kansas City and eventually backed their way into the postseason.

Still, as a 12th-year NFL veteran, Alexander understands a thing or two about the psychology of sports in general and football in particular when it comes to negative trends. He realizes the sort of humiliation the Bills experienced with last Sunday’s 47-3 loss against the Baltimore Ravens – the worst season-opening defeat in the franchise’s 59-year history – could easily carry over into Sunday’s home-opener against the Chargers.

“I think, sometimes, when things are going bad, it’s hard to snap yourself out of it,” Alexander said.

Marlon Kerner, the Bills’ director of player engagement and alumni, remembers being in a similar situation when he was a cornerback for the team in the mid-1990s. The Bills began the ’97 season with a 34-13 home loss against the Minnesota Vikings. The 21-point margin ranks as the third-largest in team history, after the Baltimore game and a 24-point defeat against the New York Titans in the Bills’ very first regular-season game in the American Football League in 1960. 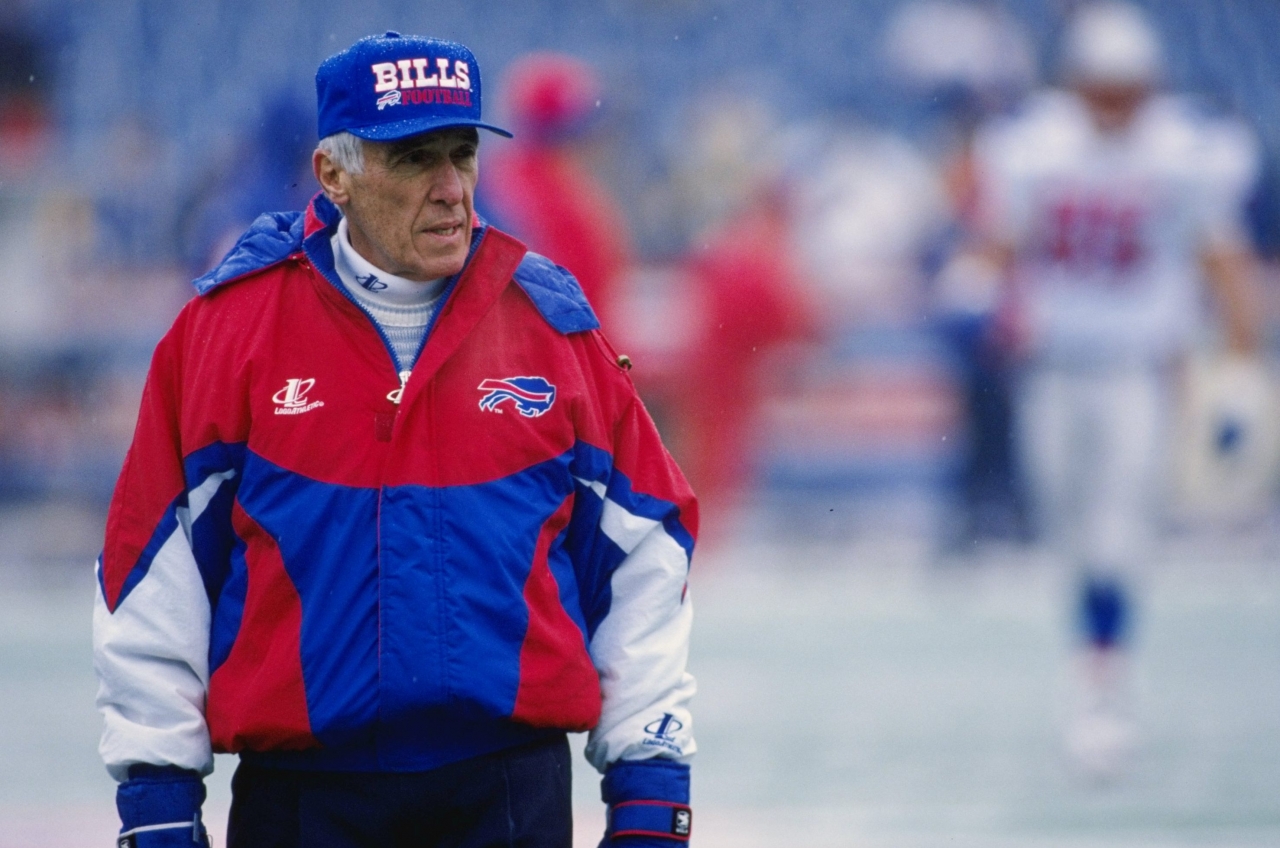 Former Buffalo coach Marv Levy was able to keep perspective after the Bills opened the 1997 season with a 34-13 loss to Minnesota. (Getty Images)

Kerner remembers how then-coach Marv Levy was able to keep a sense of perspective and not allow the same thing to happen the following week, when the Bills beat the Jets, 28-22. What Kerner remembers most about what happened then was the importance of mentally compartmentalizing the opening game rather than allowing it to turn into something much larger and more daunting.

“I can't say anything else (about the Ravens’ game) except it was a bad loss,” he said. “And that’s what it is, a bad loss. If you let it become more than that, then that bad loss turns into a second, a third, a fourth, a fifth, a sixth bad loss.”

Alexander and the rest of the Bills’ veteran leadership have been helping coach Sean McDermott pick up the emotional pieces and get everyone’s attention turned toward the task at hand. Perhaps the major shakeup at quarterback, with rookie Josh Allen taking over for Peterman, hit home a bit harder than anything anyone could say.

Nevertheless, in the locker room and on the practice field, McDermott and his leaders have pulled players aside, making sure they know that, even if it does sound like the sort of rah-rah stuff heard around a high school team, it really was “only one game.” Fifteen remain. Fourteen other teams suffered Week 1 losses as well, while the Steelers and Browns tied.

“The funny thing is,” veteran offensive tackle Marshall Newhouse said, “you woke up the next day and the sun came up. It was raining a little bit, but everybody was still alive, people were still kicking and breathing. And last time I checked, the NFL doesn't have an AP poll. That one loss counts just as much whether it's a one-point loss or a 40-point loss.”

Yet, those are just words. They need to be spoken, for sure. The larger question is, will anyone genuinely listen?

“At the end of the day, it comes down to each man taking responsibility, right?” Alexander said. “Because I can talk and Sean can talk and (13th-year defensive tackle) Kyle (Williams) can talk. But the end of the day, you have to come out and have a certain sense of responsibility, pride, passion about stepping on the field and doing your job to the highest standard as possible.

“We’re all trying to chase perfection. I understand it’s never going to happen, but that should be your mindset and that’s (on) each and every single play. ‘Alright, they beat me this one. OK, I’m coming back and I’m going to beat them the next play over and over and over again.’

“I can hoot and holler and all that, but if guys don’t take responsibility, then we will find ourselves in the same way.” 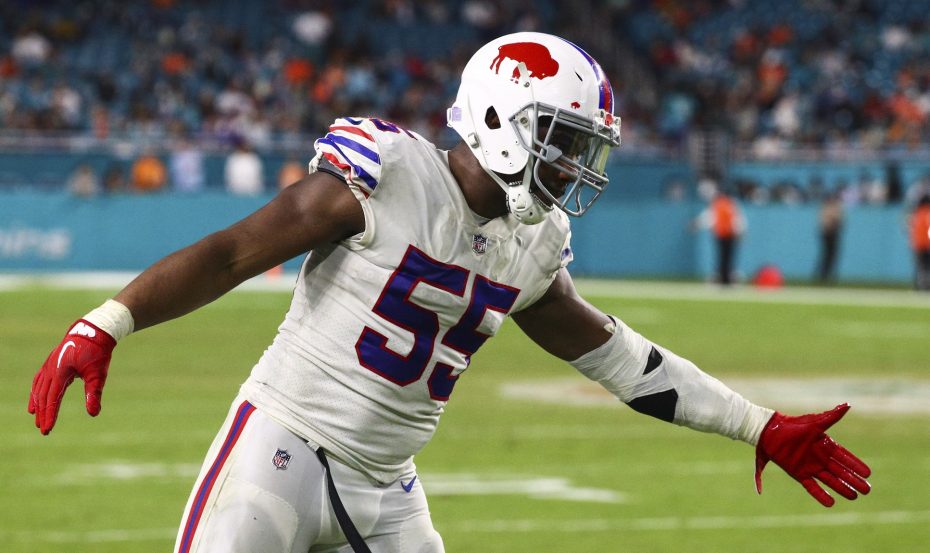 Defensive end Jerry Hughes was in Little League the last time he was on a team that began the season so poorly. (James P. McCoy/News file photo)

“Probably back in Little League, honestly,” the defensive end said.

It was in Sugar Land, Texas. Hughes has vivid memories of how everything fell apart for him and his teammates, especially on defense.

“It was a horrible game,” Hughes said. “The other team, everything was clicking for them – trick plays, things like that.”

Perhaps the most indelible memory from that day was what his coach told the team. Hughes was 10 years old at the time. He’s 30 now, yet he was thinking about his coach’s words after the Ravens’ game.

“He said, ‘Just put it in your back pocket. Once you watch the film, learn from it, grow from it, see how you can improve individually, see what you left out on the field as far as plays, see how we can work better as a unit, as D-linemen up front, as an entire defensive unit. What I saw that can help my linebackers work like that and just come back to work hungry,’ ” Hughes said. “Our Little League coach was pretty wise. He always gave us little tidbits that we can kind of take with us. I know that was one that one that I've kind of taken with me.

“I think that’s what a lot of us have done. We understand there aren't going to be any championships won in Week 1, so certainly we can use this as a measuring stick just to see where we stand and how we can learn and grow from that.”

In his eighth NFL season, Newhouse can’t recall being a part of another game like last Sunday’s as a professional. And he thinks there’s a good reason.

“In the NFL, (games like that) rarely, rarely ever happen,” Newhouse said. “I won’t say it’s an aberration. I will say that it is not indicative of the type of people and the level of player we have in the locker room.

“You have to keep it in perspective. We embarrassed ourselves and the Bills, but guys in here have too much pride and take that to heart too much to just let that, a) be a deterrent for how we prepare the next week, and b) just to let that happen again.”

More than anything, the vets on the team believe that less is more in their communication with their teammates, that maintaining a simple message is better than diving deep and dwelling too much on the negative. One popular phrase they’ve been throwing around is, “Just do your job to the best of your ability.”

Alexander believes the team is more than capable of a faster start than it had at Baltimore and even through each game of the preseason.

“Obviously, we have to come out with a higher sense of execution early on,” the linebacker said. “That’s kind of been our Achilles' heel. If I kind of just feel every single game this year, it’s just slow starts. No rhythm early on. Some games we’re able to find it and get it back, other games you're not. And the hard thing about preseason is when you have those games, you don’t have a chance to find your rhythm because you're out of the game before you really get into it.”

That was to be the thrust of a message Alexander was planning to deliver Saturday night during the final team meeting of the week.

He was rehearsing parts of it in the locker room Friday.

“Come out with some fire and passion!” Alexander said. “We love to do this. We’re doing it for more than a paycheck. I don’t care what we do, start fast and everything else is going to take care of itself.

“Because football is so much a confidence game. I mean, you come out there and whip the man the first play of the game, it doesn't matter what happens. He may beat you a couple of (other) times, but you’re just so engaged and got that confidence from that first play, it just kind of carries over.”

That is, provided what does carry over doesn’t turn into the wrong kind of snowball effect.