Rasmus Dahlin said it with a straight face Friday at HarborCenter after skating on his first day of training camp with the Buffalo Sabres: His goal is to make the team.

Humble, noble thought by the 18-year-old. The rest of the world, of course, is far more presumptuous and has Dahlin mapped out to be the savior of the franchise.

Reminded that all those draft magazines and internet sites that trumpeted his arrival in North America should go out of business if he doesn't make what was the NHL's worst outfit last year, Dahlin laughed and said sheepishly, "I'm not reading those kind of things."

When the story was relayed to him, coach Phil Housley had a good chuckle as well.

"I can only reflect on my career," said Housley, a Hockey Hall of Famer who played in the NHL for 20 years. "Every year I was prepared to make the team. It’s a great attitude because you have to strive for excellence. You’re striving for perfection and you’re not letting yourself off the hook. You’re holding yourself accountable. That’s a great attitude to have."

Dahlin's first day of camp was pretty routine. He was positioned at left defense, with Jake McCabe his first partner on the No. 2 pair behind Marco Scandella and Rasmus Ristolainen. His fluid skating and incredible edges were on full display for the couple hundred weekday fans who came for a glimpse.

He burned Alex Nylander to score in one defense-on-forward rush drill and certainly held his own in other head-to-head matchups featuring normal forward-on-defense matchups.

McCabe, back on the ice in an official capacity for the first time since January shoulder surgery, said he was excited to learn he was getting the first call as Dahlin's partner.

"The guy is an incredible talent as we all know," McCabe said. "He's one of those guys that's going to push me and make me a lot better player. I'm going to try to help him along with the North American game, talk to him as much as I can to help develop his game on both ends of the rink."

McCabe, starting his fourth full season in the NHL, said he feels he can complement Dahlin's style.

"I think we’re both very good skaters who can get up and down the ice," McCabe said. "He’s very good on both ends. Obviously his talent with the puck on his stick is something that’s been highly touted but I think his defensive play is very underrated. He’s got a great stick, he plays the body and with his skating ability he can defend really well, too.” 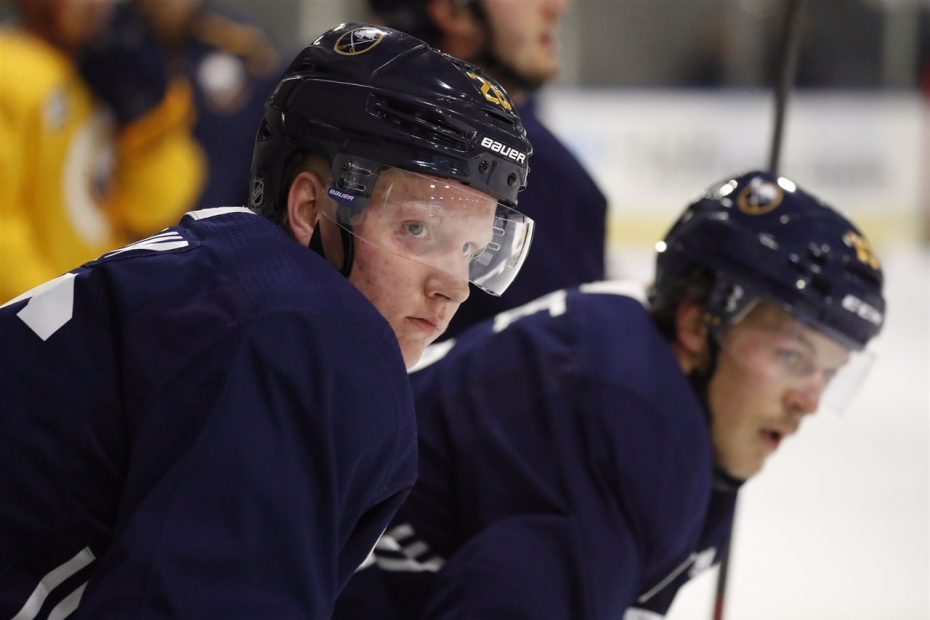 McCabe has predominantly played the left side in his career while paired with Zach Bogosian, but does have some experience on the right side. He said he's not overly concerned about the switch.

"I think over the summer you work on your skills, not only left side but right side," McCabe said. "Puck retrievals, whether it be our neutral-zone regroups, offensive blue line work. But I have played it in the past, so it’s not unfamiliar territory with me. It’s just getting reps at this point and getting comfortable with it.”

Dahlin said he quickly felt he built some chemistry with McCabe.

"He was great to play with. He talked a lot out there and he's going to teach me a lot," Dahlin said. "I'm enjoying playing with him. ... I'm super excited to hear what he has to say. He's a really good 'D.' He knows how to play and he's been in the NHL."

In his second season, Housley is intent on pushing speed and tempo with his team. Dahlin obviously is one key addition on that front.

"It's for real now, it's serious," Dahlin said. "The pace is higher. It feels good. I expected that kind of pace. It was fun. It was high tempo. It's hard but that's the fun thing about it."

"It was high tempo, high-paced," McCabe said. "Guys were going up the ice competing and that’s all you can ask for, especially on Day One when you’re knocking off the rust a little bit. Guys showed a great effort today. That’s a good start."

Dahlin probably thought he got his first leg up on making the team. We all know better.

Sabres Notebook: Housley picks up the pace, McCabe back from surgery