Former surgeon-turned-developer Dr. Fadi Dagher is ready to mix his old and new lives, with his latest redevelopment just north of the Buffalo Niagara Medical Campus.

Plans by Michael J. Conroe of Architectural Resources for the $25 million project call for a 128,890-square-foot building at the southeast corner of Main and Dodge streets. It will occupy a 1.551-acre site that has been vacant since the former motel was demolished in July 2014, according to a letter to the city Planning Board and Zoning Board of Appeals.

"We're excited to change that area of Main Street, and bring a vacant lot and be able to revitalize it into something that will add a lot of character, especially approaching the medical campus," said Kevin Dagher, vice president of Cedarland and son of Dr. Dagher. "We look forward to completing the project."

The project – owned by Dagher's D&S Capital Real Estate – is aimed at medical campus workers, as well as University at Buffalo medical students and other downtown employees. The building will include about 215 apartments – 85 one-bedroom, 15 two-bedroom and 115 studio units – across all five floors. Rents have not been set, but will be at market rates, Dagher said.

"The project will create new, high-quality residential options for students and others living and working in the area and revitalize a property that has long been an eyesore on the Main Street corridor leading to Buffalo's world-class medical campus and Theatre District," said attorney Steven J. Ricca, who represents Dagher's firm.

The building will also include three commercial spaces of 1,200 square feet each, plus residential amenities, office and co-working space, all on the ground floor. The fifth floor will feature an interior lounge and virtual reality room with an adjacent exterior rooftop deck. 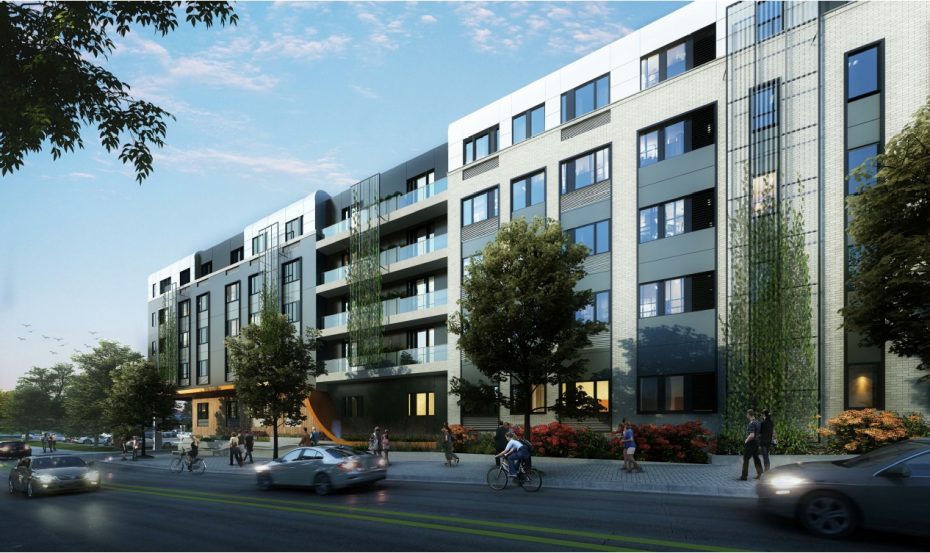 No retail tenants have been lined up yet, but Dagher said concepts such as a restaurant, daycare, grocery store or healthcare clinic could be among the options.

"We don't have anything yet, but these are ideas we're getting so far," Dagher said.

The property – located at 1155 Main but also incorporating 11 and 19 Dodge St. – is bordered by parking lots and commercial buildings, as well as the two streets, and is just north of the Summer/Best Metro Rail station. That makes it ideal for transit-oriented development, as envisioned in the Green Code, Ricca noted in the application.

The project also includes 89 off-street parking spaces, plus indoor bicycle storage for 100 bikes at no charge to tenants. Cars will enter and exit off Dodge.

Cedarland is working with Blackfish Investments, a Provo, Utah-based firm that develops, renovates and operates student housing nationwide, particularly for graduate students. The Blackfish partners - including David Freeman of DF Fusion Investments - have developed projects in Utah, Colorado, Arizona, Nevada and Florida, and are currently working on a student-housing project at 2929 Main called Rails on Main.

Dagher, a former surgeon with Kaleida Health, started investing in real estate years ago but broke into the larger development world in 2013 when he teamed up with a Middle Eastern hospitality company to buy the Holiday Inn Grand Island.

He later sold that investment, but bought up the Waterfront Village office complex and the Main Street site, as well as vacant land in Clarence and three large buildings on Broadway on Buffalo's East Side – the former Sattler's Department Store building at 998 Broadway, the former Eckhardt Building at 950 Broadway and an industrial building at 642 Broadway.

Cedarland has been planning to redevelop the Main Street property since the company bought the derelict motel and adjacent land for $1.91 million in 2014 and 2015. Initial plans involved a Sleep Inn, and later a four-story office building. Kevin Dagher said officials "looked at a couple of different building types," but "wanted a building that stands out, has a comfortable feel but also a modern look."

"We wanted to tie in the medical campus, but we also wanted a design that would fit with the commercial aspect of Main Street and the residential feel of Dodge Street," he said.

Ricca said the design of the Dodge Street facade has already been modified to "enhance its residential appearance in order to respect and benefit adjoining land uses." Those changes came in response to feedback from neighboring residents and property owners, as well as Common Council President Darius Pridgen.

According to Ricca's letter, the new building will feature balconies, creative window patterns and "dynamic lighting effects" to "echo the city's radial street design and transit system and foreshadow the diverse architecture" of the nearby medical campus.

Twelve new street trees and five planters are included along the two streets, along with benches "to make it feel more like a neighborhood feel," Kevin Dagher said. 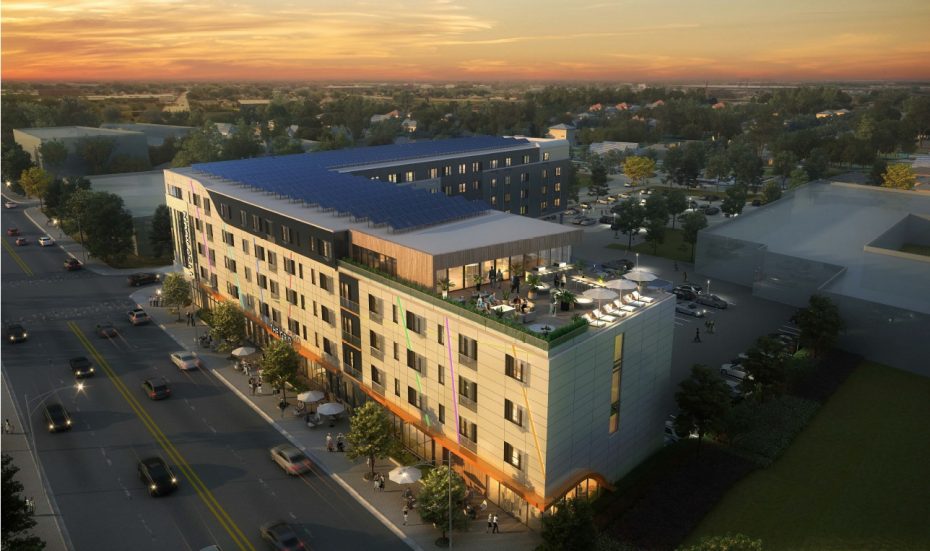 The facade includes a mixture of light gray brick, wood planks, glass and gray, charcoal and white metal paneling, along with some "green" screens, particularly on the Dodge side. The roof lines were also curved in the new design along part of the fourth and fifth floors to soften the look, as is the tan metal awning line above the three storefronts. The rooftop also will include an energy-efficient solar-panel system.

"Great care has been given to the design of this vibrant and modern mixed-use building," Ricca wrote.

The design also shows a series of diagonal multi-colored LED lines along the Main Street facade, with a single long pink line cutting across them. That will represent the streetscape and Metro Rail stops, with white dots moving along the pink line to pinpoint the approximate location of the trains for commuters. A more formal map, with labels, will be just inside the building.

"We're going to encourage people who work on the medical campus to just pop in the rail station," Dagher said. 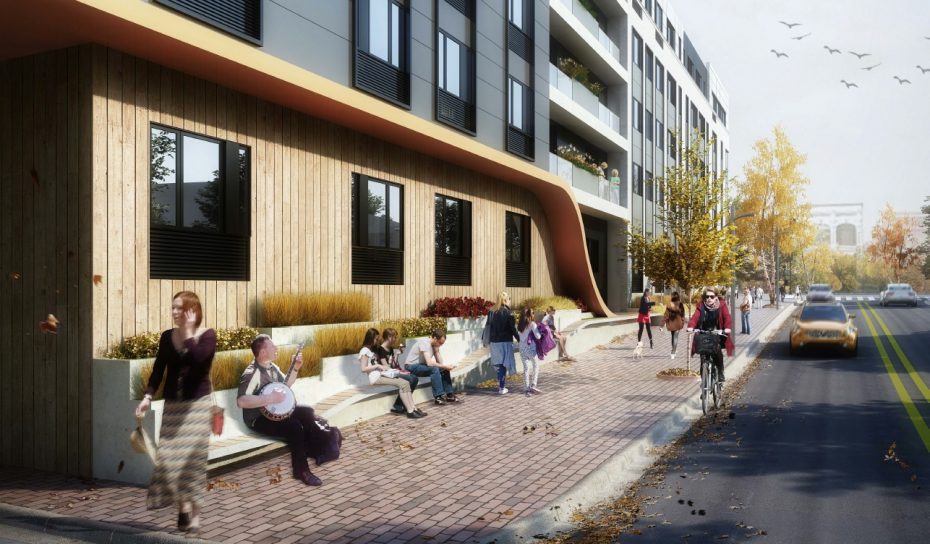 Ricca noted that soil sampling has already indicated that the ground may be contaminated, so the developer is considering participating in the state-supervised Brownfield Cleanup Program, under which the soil would be replaced.

Besides site plan approval and permits, the project requires two variances for inadequate greenspace in the parking area and smaller parking lot islands than required, because of the odd shape and topography of the property, Ricca said in an interview.

"This is a project that is in almost complete compliance with the [Green Code], which should make almost everyone happy, given the discussions about other projects in the city," Ricca said.

Kevin Dagher said the company and construction manager Buffalo Construction Consultants hope to start work in the spring and finish in summer 2020 after 14 months. "We're excited about the project, and look forward to having it get started," he said.