BN Soccer's tour around local college soccer begins with a deeper look into the University at Buffalo women's soccer team, which enters Friday's Big 4 rivalry tilt, at UB Stadium against St. Bonaventure, with an impressive 5-1 start to the season.

As we will with as many local teams as possible this fall, here are five storylines to know before checking out the Bulls in action.

Carissima Cutrona has been a central figure in local soccer for a long time. The Bulls' feared forward made opposing high school coaches thankful they left her division, captured PrepTalk Player of the Year honors, recovered from a torn ACL during a medical red-shirt year at Colgate, transferred to UB, earned major recognition with the Western New York Flash and now sprints into her senior season with one goal: A Mid-American Conference Championship.

"That's the number one thing," Cutrona said succinctly. "If nothing else this season, we want to win a MAC Championship, and we're willing to do whatever it takes to get there."

Shawn Burke's Bulls haven't reached the title game since hoisting the trophy in 2014, Burke's first season as head coach after spending the previous five as an assistant. But he hasn't had a superstar senior approaching school records with the hunger of Cutrona, either.

"Definitely with it being my senior year I want to leave everything I have on this team and on this program," Cutrona said after a 2-1 win over rival Canisius. "We have such a talented group of girls, so I'm looking forward to it and I definitely think it's going to be a special year."

The Williamsville South alum has already posted three goals and, more impressively, six assists, which put her atop the country in helpers per game. UB's single-season assist record is 11. In terms of career marks, Cutrona's 23 goals have her tied for eighth in goals, and her 62 points are good for sole possession of seventh.

While her name will be etched in the record books regardless of team success, securing the MAC title that's eluded Cutrona and the Bulls for the last three years would be an indelible memory.

A partner in crime

Not since Kassidy Kidd graduated in 2015 has Cutrona had a potent running mate up front, partly because her own role has been more on the wing than as a striker, with a No. 9 such as Celina Carrero or Gianna Yurchak holding the ball up to involve several attack-minded midfielders. 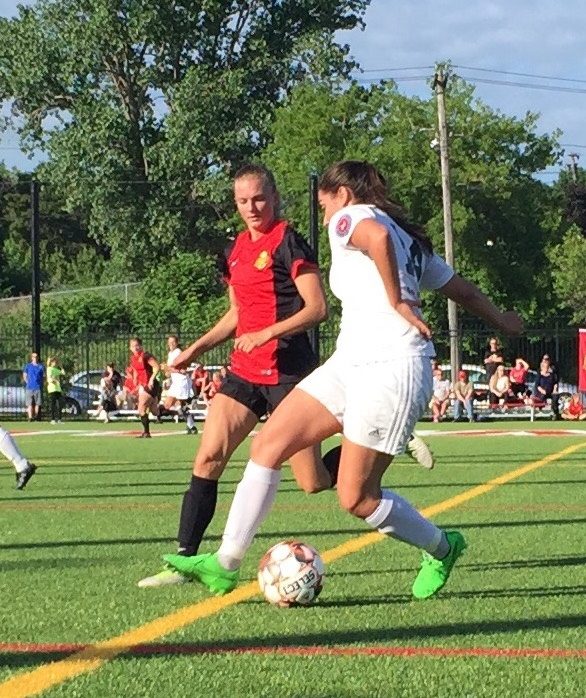 But with Marcy Barberic, a sophomore who played several positions last season, now a dedicated second striker, a partnership is building that has opponents on notice.

"Me and Marcy have a really good chemistry with each other," explained Cutrona, who played with Barberic over the summer with the Flash.

"We worked a lot on it this summer, learning each other's tendencies and doing combinations with each other, and I think the best part about that is we still have a long way to go, and it can still definitely get a lot better, and I think we're looking to continue and improve that this season."

Burke knows what a luxury he has in two athletic forwards who can stretch defenses with speed and dribbling, and the trickle-down effect that combination creates.

"They're so dangerous...the pressure they put on and they know how to get in dangerous spaces, they're looking for each other," Burke said of Cutrona and Barberic. "They draw so much attention that the bank of three [midfielders behind them] is getting a lot of opportunities.

"It's a first time that Carissima's had a real special player with her in that role, and I think everyone is benefiting from it right now."

Injuries have taken their toll - but for how long?

The injury bug catches college teams all the time, although some get bit significantly worse than others. For the Bulls, the bug has had a feeding frenzy, pardon the graphic metaphor.

In UB's win over Canisius, the Bulls were down seven players from their roster of 22, including usual starting wingers Kara Daly and Kaitlyn Walsh.

"We're banged up," Burke admitted following that win. "I'm playing six freshmen a lot of minutes, and I think that showed [against Canisius].

"But there's no better experience than getting in the game," Burke added, "and overall they've done a great job responding, and I think those minutes are very valuable."

The growing pains of these six freshmen now should pay off as the conference slate unfolds; they shouldn't be overwhelmed by adversity or too wide-eyed at new situations. That said, the health of Burke's squad - especially dynamic, pesky Walsh and polished, assertive Daly - will be key to a title run.

[Read: Love women's soccer? Find where and when all local college home matches are this fall] 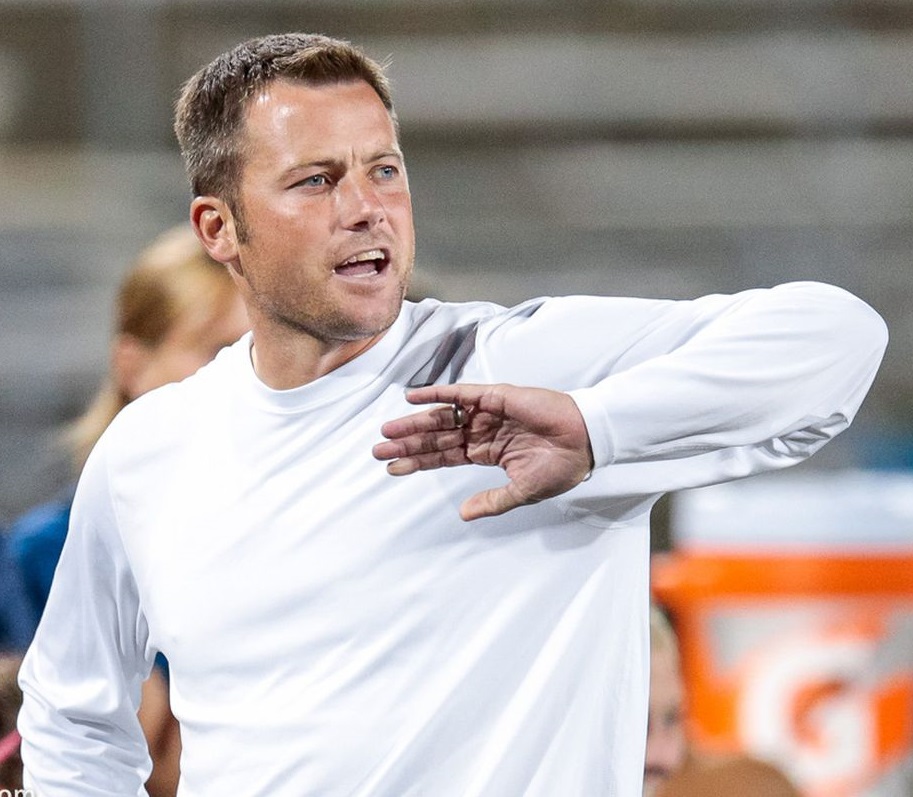 Shawn Burke, pictured in 2014, is now in his fifth season as UB head coach. (UB Athletics)

Two of the freshmen - goalkeeper Emily Kelly and center back Tess Ford - have already seized conference honors, winning MAC Defensive Player of the Week in succession.

The Wilson shot-stopper's shutout streak reached 384 minutes before the Griffs' Maddie Beaulieu spoiled it, while the Williamsville East back's goals against Canisius and St. Francis (PA) further elevated her contributions on the defensive end.

Even though she's yet to see her name up in lights, Hannah Callaghan's role isn't necessarily one that leaps out. The holding center mid from Rochester's Wheatland-Chili has played with the poise of an upperclassman. The twin sister of teammate Abbey is smart on the ball, hard-working enough to cover the ground demanded by the position and able to connect passes up the field.

Perhaps the most inspiring story is the training efforts of Andrea Judasz, a Lancaster graduate who's forced her way into Burke's game-day rotation with consistency and solid outings when she's on the pitch. The outside back may not log heavy minutes once the squad is at full health, but it's proof walk-ons with long odds of playing time can make an impact.

Reigning MAC first-team pick Gurjeena Jandu is the unquestioned leader at the heart of the back four, while senior outside back Rebecca Bramble has bought into the program and served in several roles over her four years.

Ford will be tested more defensively when conference play begins Sept. 21, as will Abbey Callaghan, who's started every match thus far at fullback. (The family and friend support for the Callaghans at home matches is something to behold).

Meghan Simmons, a reliable starter on defense last year, has been limited to 21 minutes so far in 2018 due to injury, hurting the back four's experience.

In a pinch, Burke could turn to Adrianna VanCuyck, who's played outside back in the past, but the head coach seems to prefer the junior as an offensive threat higher up the field.

*UB was picked to finished fourth in the 12-team Mid-American Conference by a pool of voters. The Bulls finished fifth last season with a MAC record of 5-4-2. They lost in the quarterfinals to Bowling Green, 3-1.

*The Bulls have continued their commitment to Team IMPACT, with sixth-grader Sarah Reid, who suffers from spina bifida, on the roster and joining the team on the field before home games. Read that story here.

*Of the three teams picked to finish ahead of the Bulls - Kent State, Ball State and Bowling Green - only the Falcons visit UB Stadium (noon Oct. 21).

*Who knew Gianna Yurchak's skill set was so diverse? Deployed as a target striker for much of last season, the sophomore from Leola, Pa., has settled in as a No. 10, the role of creative distributor. She looked comfortable in that spot against Canisius.

*Four of the Bulls' freshmen from 2017, including Mackenzie Allen, the sister of Major League Soccer's Jordan Allen, are no longer with the program. Lena Lucas, Julia Whipple and Sidney Reeves are the others. This kind of turnover isn't unusual, but it's still worth noting.

*Five of UB's first-choice starters were on the roster of the Western New York Flash of United Women's Soccer this past summer.