"People like their fried food in Buffalo," Jonathan Wilson quipped.

While lacking the showiness of stadium foods Delaware North has debuted for the Sabres, the new items for general Buffalo Bills ticket-holders at New Era Field - beginning with Sunday's clash with the Los Angeles Chargers - represent safe choices.

The biggest news for hungry fans broke in late June, when Lloyd Taco - now with four trucks and two brick-and-mortar restaurants - announced a presence at New Era Field for the first time.

Pre-wrapped burritos with either braised beef, chicken, pork or black beans will be sold from five concession areas (sections 109, 123, 131, 312, 333, plus clubs and suites), in addition to the popular pork Tricked-Out Nachos, with pickled red onions, sliced jalapenos, queso and Rocket Sauce.

[Read: For fans - what to expect at the Bills' home opener] 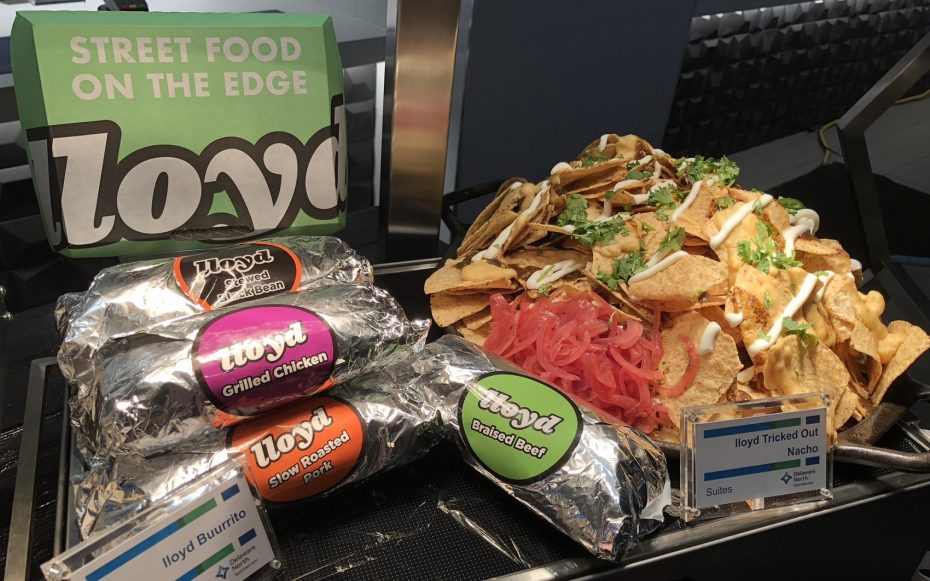 The display of Lloyd burritos and Tricked-Out Nachos at the Bills' press conference. (Ben Tsujimoto/Buffalo News)

"We always try to get local businesses involved," Wilson explained. "We partnered up with La Nova a couple years ago, so Lloyd is a newer concept to the area."

But with the Erie County Fair flourishing around the onset of Bills preseason, Delaware North opted to roll out four fair-style concessions - called their "Fair Catch" after the undeniably anticlimactic football term - in fried PB&J, funnel cakes, corn dog and apple pie logs with caramel sauce. The first trio may be found at section 121 only, while the sweet branch of Original Pizza Logs can be spotted at sections 108, 110, 137 and 139. 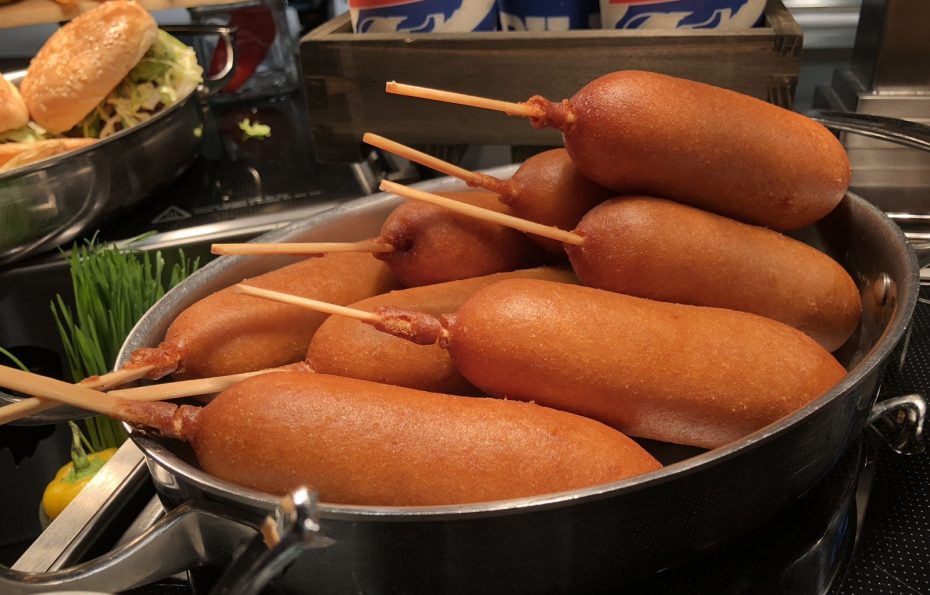 The fried peanut butter and jelly is the Josh Allen of the roster (unproven with limitless potential); it fits the mold of a crazy carnival food but still entices enough to order during a snowy November game.

A more subtle addition to the Delaware North menu is the Buffalo chicken wrap, found at eight windows on the 100 level and four in the 300s. Chicken fingers are fried, cut and then tossed in a mild hot sauce to order, which theoretically should produce a hot, crispy and saucy combination.

Blue cheese dressing, not ranch, is the appropriate condiment; Buffalo Sportservice appears to know its audience. 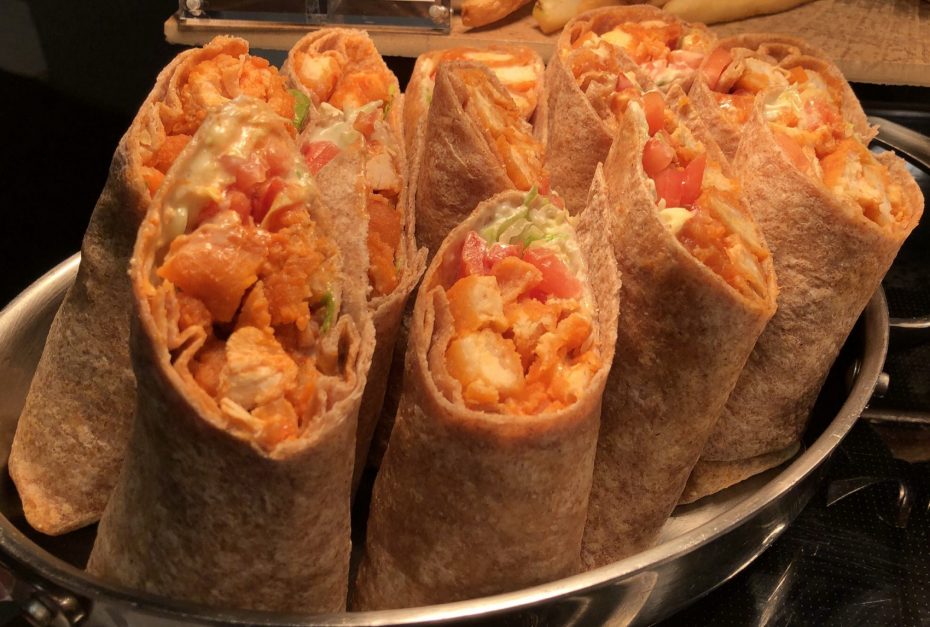 The Buffalo chicken wraps, sitting under a heat lamp, are a local staple. (Ben Tsujimoto/Buffalo News)

Perhaps even more classic is the fries, burger and milkshake combo that'll debut in section 121. It's a two-patty pub-style burger with hand-cut fries and a vanilla shake. If you're risk-taking type, dip the fries into the shake.

*The signature pretzel - a thick, soft stick topped with garlic-parmesan seasoning - would pair well with an overpriced stadium beer. The spicy marinara was pretty tame.

*The new meatball bomber is a La Nova Pizzeria product, which bodes well for quality. Be careful, though, as you don't want to lose a meatball out of the roll's rear end. That's trouble.

*If you're going to order grilled cheese while sitting in a swanky club seat, then it should have Yancey's Fancy cheese and a bacon-jam spread. (If you've never tried bacon jam, don't shy from the concept. It's a little sweet but typically doesn't lose the rich, smoky flavor of bacon).

*There's a four-patty burger on the menu. If excess is your thing, go at it. 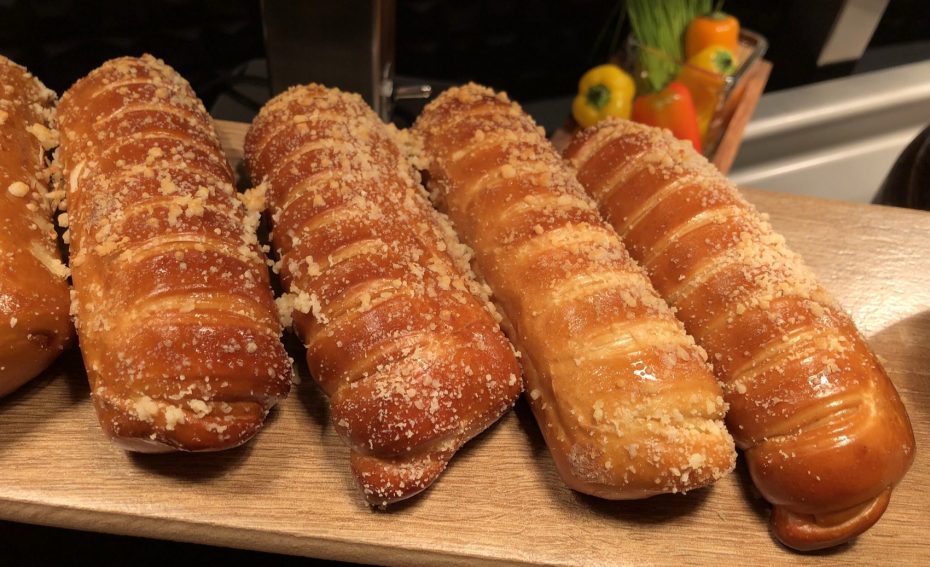 The signature pretzel, for club-level fans only, is topped with a garlic-parmesan seasoning and served with marinara sauce. (Ben Tsujimoto/Buffalo News)

Three (potentially offensive) takes on what's new in the suites

*It's amusing that the healthiest options - such as the Mediterranean spinach salad and chicken with soba noodles - are available for those with the most expensive tickets. What does this mean? With wealth comes nutritional responsibility? Someone pen a brilliant sociological study on stadium food.

*The major exception to that rule is the 16-inch slice of La Nova Pizza. It's a sheet pizza cut into six slices, Wilson said. Big hands are required for the floppy behemoth.

*One final thing that doesn't make sense about what's exclusive to the suites: Individual chicken pot pies. These stick-to-your-bones, easy-to-eat dishes would be ideal for fans stuck outside in the snow, not the ones who can nibble cleanly at a table in a heated room.