The street running between two West Side industrial buildings smells like beer.

One side runs past Resurgence Brewing Company’s Niagara Street production facility and beer garden. On the other side, there’s another homegrown operation brewing.

In the cellar of a long brick manufacturing building, Robbie Gianadda grows mushrooms, mostly oyster and shiitakes, selling them to local restaurants and the Lexington Co-op on Elmwood Avenue.

His business, Flat #12, started in the basement of his Elmwood Village home five years ago, spread into his backyard, then outgrew his residence for this industrial space.

Now he’s getting ready to take his next big step.

Gianadda’s business is mushrooming, and he’s considering moving into a bigger space in developer Rocco Termini’s Chandler Street business incubator. There, he hopes, Flat #12 could ramp up production and develop new product lines.

And maybe even grow enough to eat some himself. 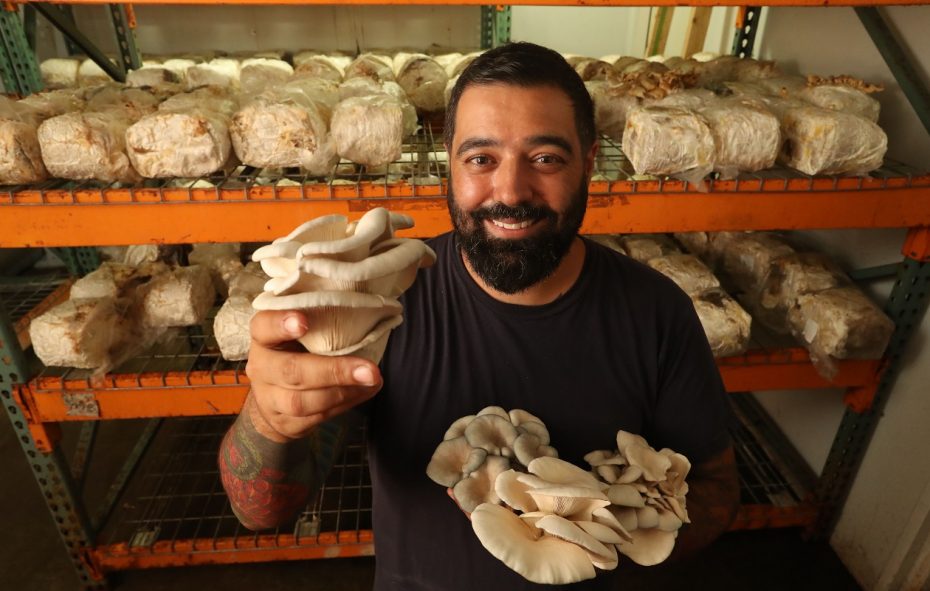 Pretty good for a hobby started on a lark. In 2012, Gianadda started his first mushrooms as a project with his daughter Clementine, growing them in 5-gallon plastic buckets of Spot Coffee’s spent grounds.

When Gianadda decided to go professional and start selling mushrooms to some Buffalo-area restaurants, he was producing about 30 pounds a week. Today, working in grow rooms built from scratch in the basement of the circa-1940s building, Flat #12 is producing 200 pounds a week. That's just a tiny fraction of what Buffalo's commercial kitchens use, most supplied by produce wholesalers, but it's close to becoming Gianadda's full-time job.

Along the way, Giannada said, he made just about every mistake he could.

Mushrooms live on dirt, at least in the wild. But if you’re trying to grow them in a steady, reliable fashion, a dirty space is one of the challenges.

“One problem down here is it’s hard to keep clean,” Gianadda said, in a basement space dusty with soil and the specks of dead fungus gnats. “It’s tough to keep this place clean because it’s industrial.”

To understand why that’s a problem, he explains a bit about mushroom growing.

The fungi Flat #12 sells are grown on blocks formulated to feed the particular type. Oyster mushrooms are grown on shoebox-sized blocks of straw and sawdust. Spores, the tiny seedlike particles mushrooms grow from, are sprinkled onto damp blocks and sealed into a plastic bag. 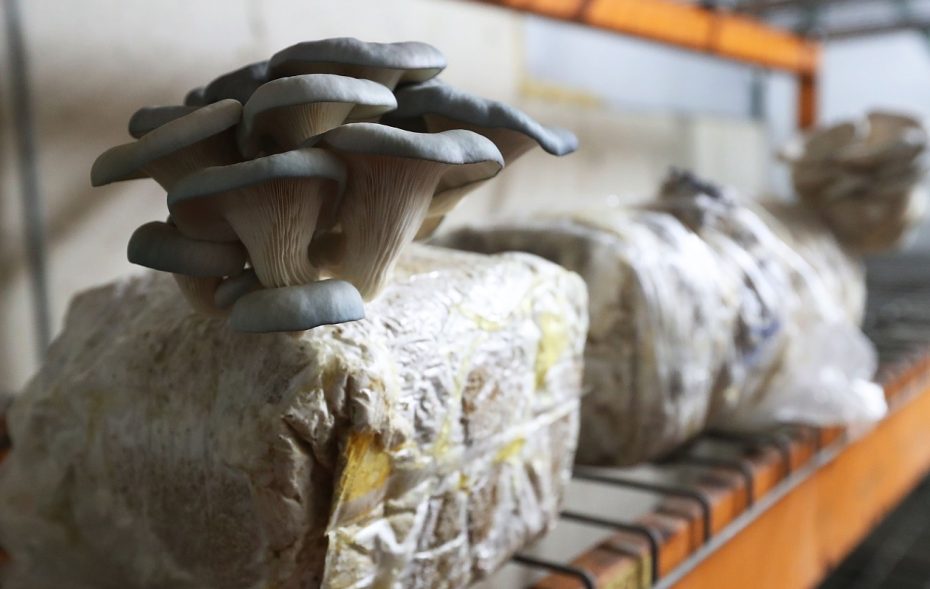 The blocks go into an incubation room, one of two rooms Gianadda custom-built in the basement. There, the preconditions for mushroom growth are set.

“After we make the blocks, they’re held in here for a couple of days, with higher temperature, around 75 to 80, relatively low humidity, and no light, while they get ready,” Gianadda said.

When it’s time, the blocks are moved to the grow room, which is cooler, more humid and well-lit. They’re spaced out on shelves, with a slice through the plastic to let activating air in, unleashing a quiet battle between microscopic combatants.

“In each of these bags, we are waging war,” Gianadda said. The good guy is the mycelium, the fungal rootlike structure that is the vast majority of the fungus’ complete form. The part of the mushroom that gets picked and eaten is only the fruit, the apple of a hidden tree.

In the grow room, the slashed bag starts the race between mycelium “and everything else: mold, bacteria, other fungus,” Gianadda said. “If it doesn’t grow through the entire substrate, and allows a competitor to take hold, this is the outcome.” He holds up a block coated thickly in green mold, not mushrooms.

If the mycelium wins, clusters of mushrooms sprout, going from a bump to harvestable size in as little as 12 hours.

After competing organisms, the other main mushroom-killer is the atmosphere. Inhospitable temperatures and humidity levels – or even prolonged fluctuations – strengthen the wrong combatants.

“It’s been a real struggle, only because of our inability to be consistent,” Gianadda said. “These last two or three weeks have been failure. It got warm in here for a little too long last week or the week before.” The green trichoderma mold took over instead of the beneficial mushroom-supporting mold and led to rot, so no mushrooms. 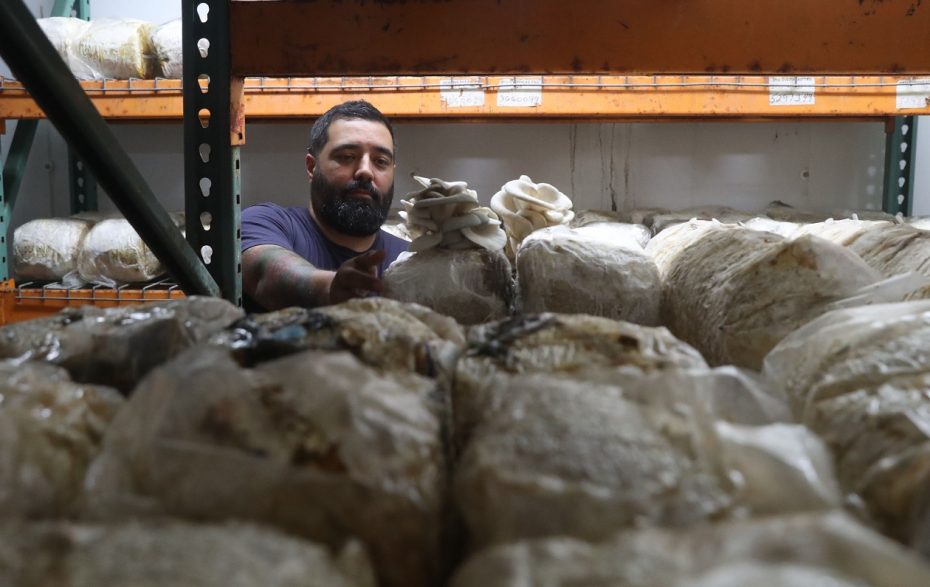 The problem is serious in the winter as well.

“This huge slab holds in the temperature, which helps in the good weather times, meaning fall and spring. But summer and winter are really tough down here,” he said. “It gets down to 48 degrees, so we had to install this gigantic furnace to heat the air in this room, and close it off from the rest of the building.”

When you’re artificially raising and lowering the temperature, controlling humidity becomes much harder, he said.

All of that’s why he’s planning on Flat #12 taking its next step. The company will keep the present space for storage and other uses, but move production to Chandler Street.

The 5,200-square-foot, air-conditioned space could hold two large rooms, lined with plastic sheeting to help precisely control the environment. Larger doors would allow the use of pallet jacking and forklifts to move racks of blocks, instead of doing everything by hand.

A big autoclave, a room-sized sterilizer, would allow him to sterilize bags, to allow bag reuse and greater production. A laboratory space, a clean room with filtered air, would allow Flat #12 to make its own spores. “Right now we buy commercial spawn because we don’t have hoods, and the stuff we’d need,” he said.

One idea he’s been shaping is a mushroom mixture for food service providers to use to achieve nutrition goals in their menus. The idea started with the James Beard Foundation’s Blended Burger Project, which has introduced the notion of mushrooms being blended into ground beef to make meals that are healthier and more sustainable.

Gianadda’s considering developing a blend of Flat #12 mushrooms and another source, possible Pennsylvania button mushrooms, to offer to institutions. “Mushrooms have a lot of protein, and a different protein than animal meat, and they’re high in minerals and vitamins,” he said. “So when you’re talking about feeding a big group of people, in schools or company cafeterias, they’re looking to get cost-effective nutrition solutions.”

Recently he mentioned the concept to Nardin Academy director of dining services Julie Levin, who had her first blended burger five years ago at a sustainability conference at the Culinary Institute of America, her alma mater.

The next year, Levin introduced them to the Nardin menu.

“We’re blending about 20 percent mushrooms into the locally sourced beef that we use,” she said. “We just get them and process them ourselves.” When she heard of Gianadda’s idea, she thought “if they can market that, especially to larger volume institutions, it’s a really interesting concept.”

On Chandler Street, Gianadda said, a purpose-built facility with air conditioning should set the conditions for stable year-round production, a good growth medium, if you will, for Flat #12.

“That’s what’s been holding us back in this space: the ability to tear it down and build it up to what we now know, after years of experience, we really want.”