Patrick Lynn has been a producer with "American Idol" for the entire 16-year run of the groundbreaking television show. This year, he successfully lobbied to have the singing competition show hold auditions in Buffalo for the first time.

"We had a monster turnout today," Lynn said Sunday. "We couldn't be happier."

More than 7,600 attended and 2,000 auditioned on a chilly day at Canalside, Lynn said. He added both attendance numbers were the largest thus far among the 20 stops of a 25-city audition tour.

"This is one of those cities we’ve never been to, we’ve always wanted to come to and it’s kind of an untapped market for us," said Lynn, in his seventh season as a senior supervising producer.

Producers don't release numbers of how many performers advanced to the next round. "I can say this: Our producers are happy," Lynn said. "We've had some really good talent."

Among those to get the good news – and the accompanying yellow sheet referred to as a "golden ticket" – was 23-year-old Dominic Hannon of Buffalo.

"It's awesome. Real awesome," said Hannon, beaming under his St. Louis Cardinals cap and holding his guitar. "It’s always been one of those things on my bucket list. Every time they were just a little too far, or I had something going on, so when I found out they were coming here, I was like this is the chance, it’s now-or-never kind of thing. To do it in my hometown is absolutely awesome. I was speechless."

Hannon, who worked security at Canalside during this summer's concerts, had several supporters nearby after he performed "Raven" by Dave Matthews Band and "Pinch Me" by Barenaked Ladies. 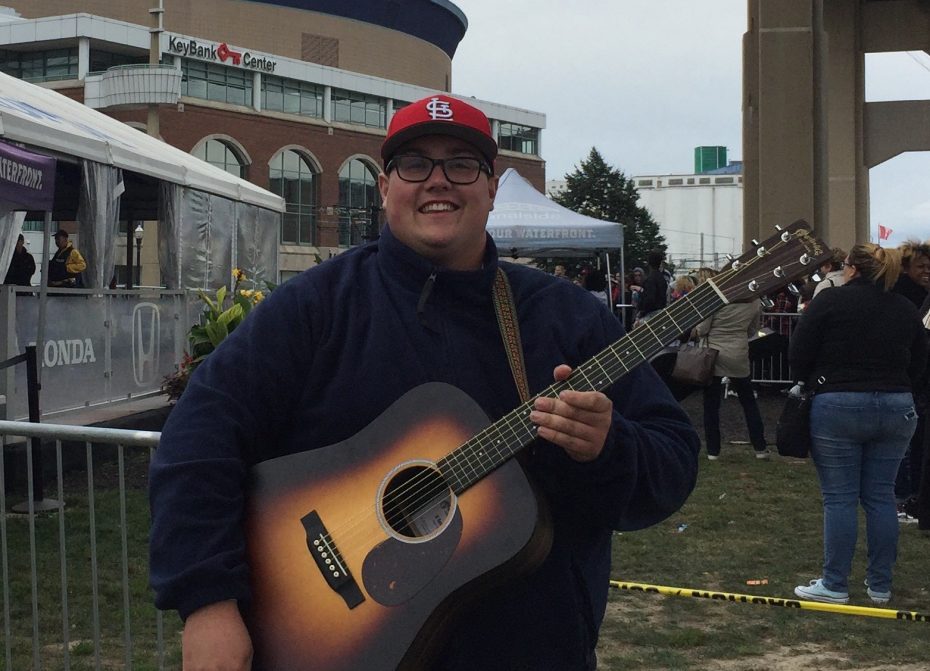 Dominic Hannon, advanced to the next round of "American Idol" during Sunday's auditions at Canalside. (Keith McShea/Buffalo News)

"I saw her grab the ticket and I was like no way, this is not happening right now," said Hannon, who attends graduate school and works at SUNY Buffalo State and is part of the alt-rock band Film House. "I turned around and my entire team of people that I work with was back there freaking out. It was just super cool. It’s hard to describe in words."

Hannon arrived at Canalside at 6 a.m., waited for Tim Hortons to open and did his audition around 1 p.m.

"It’s just an awesome experience, standing in line and meeting so many people who are all phenomenal," he said. "I love Buffalo. I know everyone from Buffalo says that, but seeing how much talent Buffalo has was really cool."

Those who advanced from Buffalo's auditions will attend the next round, which will be held at a number of different cities at dates that have yet to be announced. At that next step, singers perform before judges Katy Perry, Luke Bryan and Lionel Richie with the hopes of advancing to "Hollywood Week." The 17th season of "American Idol" (and second on ABC) begins airing in early 2019.

To audition, one only had to be between the ages of 15 and 28 and arrive at Canalside before 5 p.m. There were several hundred gathered at Canalside by 4:30 a.m., when temperatures were in the low 50s, and the high for the day was only 59. Winds hovered around 15 mph for much of the afternoon. At one point a gust picked up, whipping up dust and dirt and sending people scattering as a large registration tent was blown over.

"Buffalo doesn't usually get this cold this early," said 20-year-old Manuel Pena, a University at Buffalo junior from Queens. "But it's worth it. I'm chasing my dream."

After the registration tent, the next stop was a long line along Prime Street, just past the "American Idol" bus. From there, performers funneled into another line while friends and family waited along side. Cheers regularly broke out as groups entered the final stop: the Honda Pavilion.

"You always have to take a chance," said Octavia Arrington, a 22-year-old recent Erie Community College grad who studied vocal music at Buffalo Academy for Visual and Performing Arts and is a teacher's assistant in the Buffalo Public Schools. She joined the very end of the long line at about 1 p.m.

"I love music. I love singing," Arrington added. "Sometimes people talk about 'I want to be famous, I want to sing.' But when the opportunity comes, do you take that opportunity? That’s what I’m doing today, taking the opportunity. If I get it, I get it; if I don’t, I don't. But at least I can say I tried." 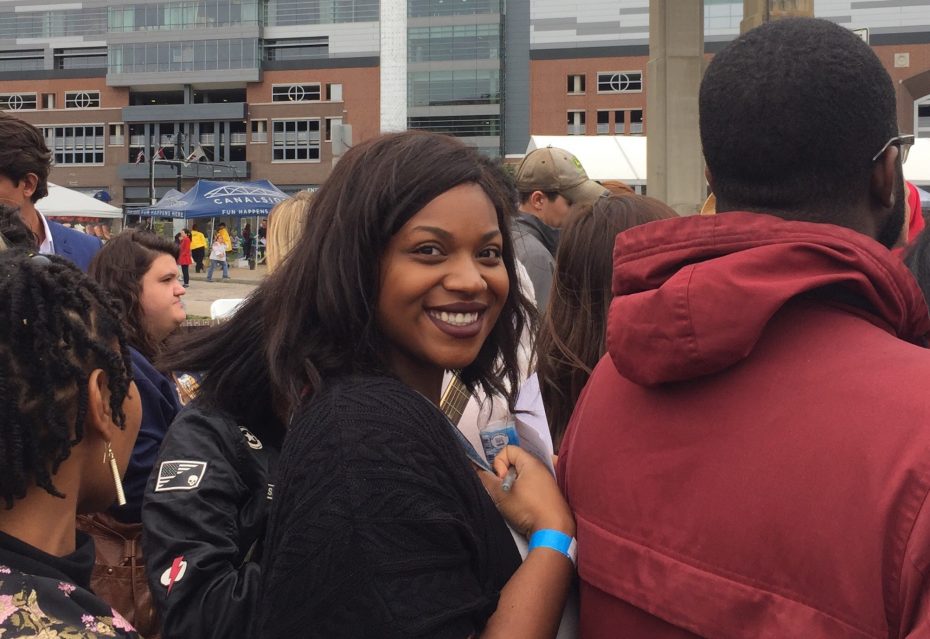 Octavia Arrington, a Buffalo Academy for Visual and Performing Arts graduate, joined the end of the line during the afternoon. (Keith McShea/Buffalo News)

Rachel Delgado, a 26-year-old lab technician, drove five hours from Newburgh in downstate's Orange County, even when two friends who had planned to make the trip were unable to come.

"Standing in line for five hours is tough, but it's worth it in the end to get a chance," she said.

While some who auditioned came from out of town to what was just one of two audition bus stops in the Northeast (along with Philadelphia), organizers and attendees said those trying out were overwhelmingly from the Buffalo area.

"I was like, we need to go there, and everybody was like you’re right – let’s go there, and it’s paying off," Lynn said of the decision to hold auditions in Buffalo. "Across the board, I'm hearing that everybody is happy.

"Is the next 'American Idol' going to come from Buffalo? I'm certainly hoping so, because no one will ever live it down."