DETROIT – The once-gleaming train station had been a symbol of decline for decades.

Shortly after the last Amtrak train rolled out, vandals began hauling away light fixtures and clocks, pilfering the copper and spraying the walls with graffiti. Hundreds of windows were broken, leaving barren frames to add to the hulking 17-story building's ghost-like appearance.

For years community leaders struggled over how to resurrect the former train station and office tower located just outside downtown.

Sound familiar? What happened in Detroit is a story Buffalo knows well. Detroit grappled with its Michigan Central Station just as Buffalo looked for solutions to what to do with the Central Terminal, the 17-story Art Deco landmark that towers over the East Side.

Detroit has found a happy ending. In June, the Ford Motor Co. announced it purchased the Michigan Central Station and will convert it into a hub for advanced automotive technology. The stunning turnaround of the cavernous space, which will cost hundreds of millions of dollars to complete over the next four years, is the latest and possibly most significant sign yet of Detroit's revival.

Buffalo's train station, meanwhile, is still looking for its turnaround. But what happened in Detroit offers at least one lesson to Buffalo in dealing with what some see as a potential neighborhood anchor but others view as an albatross.

"It shows anything is possible once you have the funding behind it," said Paul Lang, vice chairman of the Central Terminal Restoration Corp., the non-profit that owns the abandoned Buffalo station.

Members of the Central Terminal Restoration Corp. are encouraged by the turn of events in Detroit. The Detroit station joins other iconic railroad stations that have been converted into new uses, including some, such as Cincinnati and Kansas City, that also provide Amtrak service.

"It's encouraging to see another Rust Belt city identifying and committing to the restoration of an iconic structure, especially one so similar to ours," Lang said. 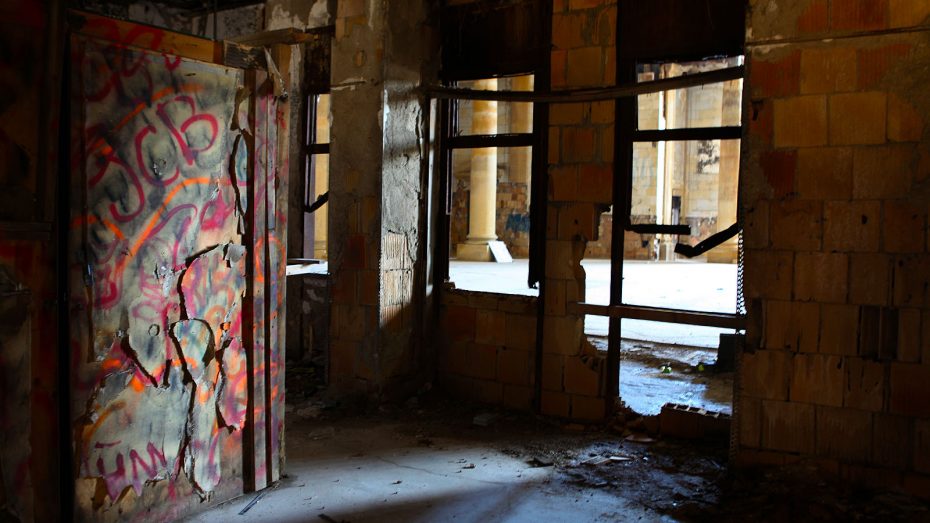 Before the Michigan Central Station was purchased by the Ford Motor Co., graffiti artists did a great deal of damage. (J. Kyle Keener/Special to The News)

For those in Detroit, it's exciting.

"We're really excited because it is going to bring a lot of life to Corktown," said Mica Gancos, a hair stylist at Black the Salon, speaking about the neighborhood of lower middle-class blacks and whites where the train station sits.

"We're excited to get the business from that, and it's going to help the city grow," she said.

"I've never seen it open before," she said.

Building with a presence

When Ford announced an open house at the station, the community responded in droves for a chance to get a peek inside for the first time in years.

"We had 25,000 people waiting 1 1/2 to 2 hours to see the iconic train station," said Dawn Booker, communications manager for Ford Land, a division of the motor company that owns and leases commercial property and office space. "It was like Disney World."

That recalled the thousands who showed up on a Saturday almost 20 years ago to see the Central Terminal in Buffalo after the long-shuttered building was reopened to the public.

When Michigan Central Station was dedicated in January 1914, the 500,000-square-foot building was 270 feet tall, making it the tallest railroad station in the world.

The Central Terminal eclipsed it by one foot when it opened in 1929, four months before the Great Depression.

The Beaux-Arts-style building in Detroit was designed by the same two firms – Warren & Wetmore and Reed and Stem – that designed New York City's Grand Central Terminal.

Unlike the more decorative Central Terminal, the Detroit station looks like a large administration building. In the building’s current tattered state, people can only  imagine the grandeur that was once present and may be again.

A vaulted ceiling in the concourse and waiting rooms feature Guastavino tiles that rest on self-supporting steel beams. Tall windows let in light. The plaster walls feature marble halfway down, above a marble floor that extends to the colonnade, where an arcade with shops existed. Ornamental molding and egg-and-dart details are visible.

Ford to the rescue

The previous owner was Manuel Maroun, a billionaire whose company owns the nearby Ambassador Bridge. He had plans to return rail to the Michigan Central Station. In 2015, his son, Matthew Maroun, said the company had spent $8 million to put in 1,100 windows and make other improvements to the building.

The windows, however, weren't of a style original to the building and for that reason may be replaced, said Roger Gaudette, an architect with Ford Land.

Ford is also open to using the station for rail in the future, he said.

"This is a once-in-a-lifetime job to bring something like this back," Gaudette said. "You don't just see people building buildings like this any longer.

"I call it 'having to put Humpty Dumpty back together again,'" he said.

An ongoing structural analysis of the mammoth station continues. So far, while a considerable amount of work is needed – the previous owner had put the amount at more than $100 million – the building is salvageable, Gaudette said.

The first priorities are to repair the roof and seal the exterior from water.

"I think if this was 10 years from now you'd be looking at a different story," Gaudette said. 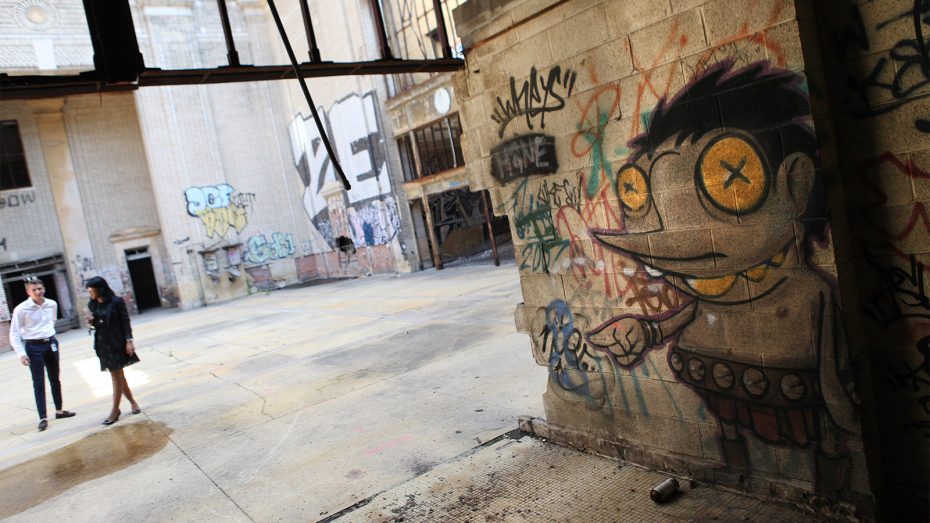 Buddy Frippolone and Dawn Booker, communications manager for Ford Land, tour the inside of Michigan Central Station. (J. Kyle Keener/Special to The News)

Ford has been assured of support from the city, state and federal governments. That includes the use of historic tax credits, which have been so critical in Buffalo for the restoration of dozens of formerly empty and deteriorating buildings, which private owners concluded were too expensive to bring back without help.

"It is a really iconic building in Detroit, but over the years it became the image of the bad things happening here," said Elana Rugh, the Detroit Historical Society's executive director. "Now, we're seeing the opposite."

"What I think is most remarkable in Ford's repurposing of this amazing building is that it is showing its unwavering commitment to the city, and to valuing history," Rugh said.

The announcement that the station will be restored has sparked the return of missing objects.

"It sparked a movement," Booker said.

A huge clock once affixed to the carriage house, on the outside of the building, was returned. So were light fixtures, mail chute covers, fire extinguishers, railroad tickets and decorative rosettes.

"Someone took the clock 20 years ago and after the purchase was announced, they called us and gave it back," Booker said.

"We don't know who it was – everything was done by text message, and they didn't reveal their name – but they took amazing care in wrapping it in a moving blanket and leaving it against an abandoned building, where they told us to go get it."

Ford has bought two nearby buildings as part of the campus with 5,000 employees envisioned in and around the train station. The first floor, however, is going to be open to the public.

"The idea is to keep all of the space open to the public, and have things happening on the weekends and nights," Booker said. 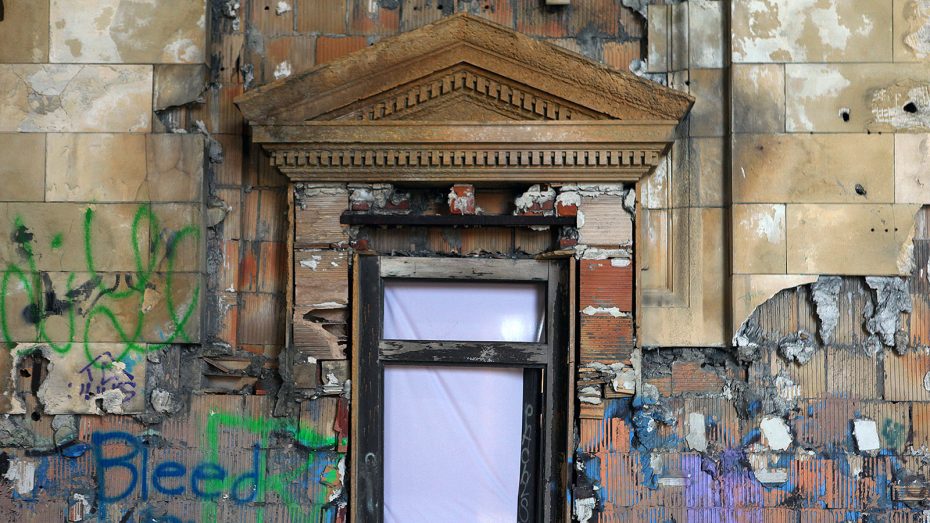 Most of the marble that once lined the interior walls of the Michigan Central Station has been taken by vandals. (J. Kyle Keener/Special to The News)

Outside, Evan Cox of Hayward, Calif., was taking photographs of the structure.

The Urban Land Institute, which came to Buffalo in 2017 to help develop ideas for future use of the Central Terminal, is planning to do something similar in November.

The Central Terminal's Lang will be on the other side this time, serving on the panel trying to help Detroit's station develop a plan for the public space.

In Buffalo, the Central Terminal Restoration Corp., which received a $5 million grant from Empire State Development earlier this year, is working on recommendations made by the institute to activate the concourse. Additionally, an electrical project has been completed, solar panels installed and the concourse window reglazed.

The state grant has brought a kind of legitimacy to Buffalo's effort, with foundations and philanthropies wanting to step forward to lend support, Lang said.

Still, he admitted feeling a little jealous over what's happening in Detroit, considering it wasn't that long ago that he was fielding calls from volunteers at Michigan Central Station seeking tips.

"We were ahead of them and now, with a substantial backer like Ford, they've leapfrogged over us," Lang said.

"But it's still encouraging and exciting to see other communities recognizing the value of iconic structures," he said. "Buffalo doesn't have a Fortune 500 company looking for a new headquarters, but the dream is still out there, and we will keep moving forward."