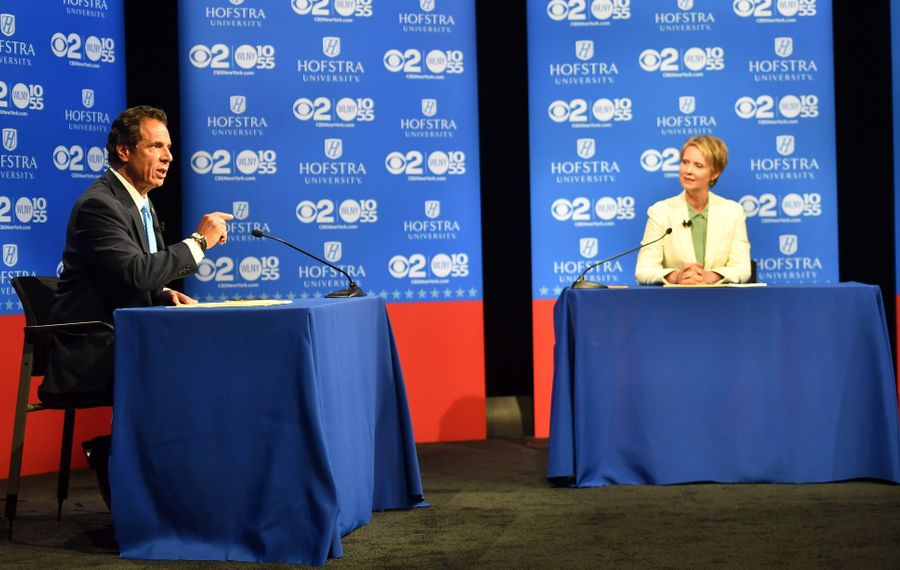 ALBANY – As the bitter primary contest between Gov. Andrew M. Cuomo and Cynthia Nixon concludes this week, the campaign is already leaving a legacy in which moderate Democratic voters across the state were barely given notice by two candidates jostling over who is a better friend of the left wing of the party.

If history is any guide, however, when the general election sprint begins for real on Friday, whoever emerges as the victor will find themselves having to pivot to the center if they are to appeal to more mainstream Democrats in large parts of upstate and on Long Island.

While he faces an uphill battle of his own given this blue state’s voter registration numbers, the Republican Party’s gubernatorial candidate, Marc Molinaro, says he is already waiting to capitalize on how far left the primary took Cuomo and Nixon on an assortment of policy and fiscal matters.

“I think they’ve become polarizing figures," Molinaro said last week of Cuomo and Nixon in between his own campaign stops.

“Traveling the state, there is little question that ordinary New Yorkers of all ideologies are concerned that the two of them have shown such a polarizing view of the world that they wonder if anyone is listening to them,’’ said Molinaro, the Dutchess County executive, of Cuomo and Nixon.

Polls show Cuomo far ahead of Nixon, though Nixon supporters say those polls have failed to capture the anger and desire for change among many Democrats.

For Cuomo, the transition period from primary to general election campaign may offer significant challenges, considering how far to the left many Democrats say Nixon has pushed him over the months. Nixon forces call it “The Cynthia Effect."

“He didn’t just move to the left; he dove to the left once she got in," one Democratic Party insider said of Cuomo’s reaction to Nixon.

But other Democrats say the characterization that Cuomo has moved sharply to the left by Nixon’s influence is misplaced. Hank Sheinkopf, a longtime Democratic consultant whose clients have included Cuomo, noted the many progressive issues the governor embraced in his eight years in office, such as marriage equality rights for gays. 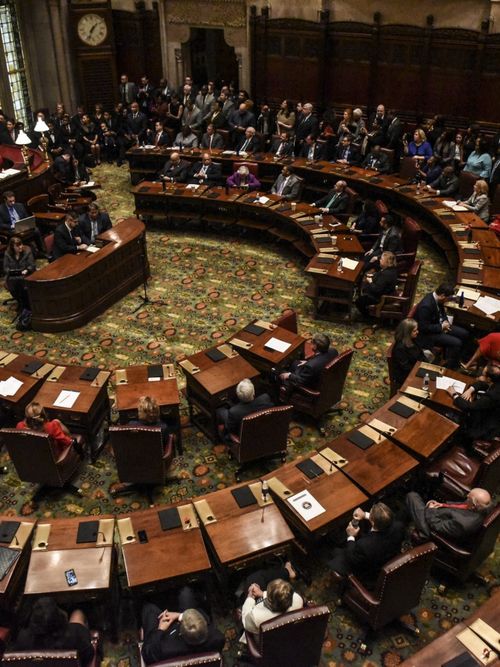 ALBANY – They might be taking the state on a leftward-leaning march, but Democrats who have controlled the State Senate for the past year are attracting a steady lineup of corporate and other interests that once were big bankrollers of Republicans in…

Sheinkopf and others note the long history in primary voting in New York and elsewhere in which the most ideological voters disproportionately turn out to vote – be they Republican or Democratic primary contests.

“The governor will do what he always does best. He moves to the left, keeps one foot in the center, and he keeps dancing," Sheinkopf said.

The two candidates have spent the majority of their time in recent months in New York City, which is expected to produce just over half of the Democratic voters on Primary Day, on Thursday. The messages heard upstate can be different than the ones delivered downstate.

The governor, for instance, does his verbal bashing of President Trump almost exclusively before downstate audiences. Downstate is where he talked of pardoning 24,086 people on parole so they can vote in the upcoming elections; his critics noted the list includes people who were convicted in sexual abuse and murder cases. Downstate, from churches to union halls, he has spent the primary talking up immigrant rights, dilapidated public housing in New York City or, in particular, the Trump White House.

On his upstate visits, a more moderate Cuomo typically emerges. In those trips, he talks of cutting taxes, the state’s property tax cap and how he restrained state spending. In Tioga County recently, he delivered an oft-repeated story of his about how governors before him were over-the-top big spenders. He names each of them and delivers the inflation-busting ways of their spending habits. On the list is always his father, the late Mario Cuomo, who was governor for 12 years through 1994. Cuomo said taxpayers in the days of his predecessors were “abused" by administrations that raised taxes because they could not control spending.

Nixon, an activist and actress who announced her bid for governor in March, believes her campaign pushed Cuomo left on a host of social, environmental and political matters. After she joined the race, Cuomo pushed up a timetable for efforts to reunite a renegade group of eight Democratic senators with a mainline group of Democrats in a united effort this year to try to take control of the Senate from Republicans.

Cuomo, Nixon has maintained, went from at one time slowing the state’s push to legalize medical marijuana access and just last year calling marijuana a “gateway drug” to this year backing efforts to make recreational marijuana use legal.

Weeks after Nixon joined the race, Cuomo proposed a statewide ban on single-use plastic bags, a year after he blocked an effort by New York City to reduce plastic bag use at stores. [Cuomo said the fee structure of the city’s effort was flawed.] Nixon also claims her near-constant bashing of Cuomo’s handling of the crumbling New York City subway system forced him to focus on the nation’s largest mass transit system.

“Only an actress could be this self-obsessed," responded Lis Smith, a Cuomo spokeswoman. “While Cynthia Nixon was collecting paychecks on movie sets, Governor Cuomo was establishing himself as the most progressive governor in America." She noted his passage of laws on gun safety, marriage equality, hike in the minimum wage to $15 in some parts of the state, a family leave program and free college tuition for some students.

The Cuomo campaign went point-by-point on Nixon’s claims of pushing Cuomo to the left on key issues. They said that Cuomo announced a marijuana legalization study effort two months before Nixon got into the race, that the plastic bag issue had been studied for more than a year, that his push on New York City housing pre-dated Nixon’s run and that Cuomo had been engaged trying to re-unite Senate Democrats prior to Nixon’s call for the disbanding of the breakaway group of eight senators.

General election shift to the center?

If she is victorious Thursday, Nixon, who declared herself a “Democratic socialist,” has no plans to morph her campaign into a more centrist position to woo moderate Democrats and Republicans. “She is running on a fundamentally progressive, populist platform and that won’t change on Friday when she wins," said Nixon spokeswoman Lauren Hitt.

The days of running to the far left in a Democratic primary and then swinging back to the center for a general election contest against a Republican opponent are largely over in a state such as New York, the Nixon campaign believes. “I think what we’re seeing more and more is you have to excite and motivate your base and give them something to vote for. If you kind of flip and give a milquetoast version for the general election you’re going to lose the base," Hitt said.

Upstate Democratic officials and party leaders who have watched the Cuomo and Nixon race play out in the boroughs of New York City say the general election contest needs to address broader needs than heard in the primary.

“I think the electorate wants to hear more than granting inmates the ability to vote. Clearly, the electorate is hungry for more substance than that sort of stuff. Things like jobs, health care," said Nick Forster, the Niagara County Democratic Party chairman.

In the North Country, Assemblywoman Addie Jenne, a Democrat from Jefferson County who represents a large district along the St. Lawrence River area, said she supports many of the initiatives Cuomo and Nixon are talking about that are labeled as “left issues," such as higher minimum wage and paid family leave.

But she worries about the many other problems, notably job creation in upstate. “There are issues important to the rest of the state that are not being discussed as they should be," the lawmaker said. She said she wants to see more attention to what she called “bread and butter issues” regarding everything from how Albany’s corruption problems are going to be addressed to the price of milk set for dairy farmers.

“It’s not that we’re not supportive of looking at many of the progressive issues being talked about. It's just those everyday issues we’d like to see talked about as well," Jenne said.

Stephanie Miner, the former mayor of Syracuse who was once Cuomo’s hand-picked co-chairwoman of the state Democratic Party, is looking forward to seeing how Cuomo tries to shift to the center in a general election contest. Miner, who is running against Cuomo as an independent on the newly formed Serve America Movement ballot line, doesn’t think he can do it successfully with voters in the general contest.

“I think with what he has spent $15 million on (from his campaign account), it’s going to be difficult to pivot off of that. But more damaging is his track record with state government mired in corruption, one million people leaving the state. … He’s going to have a hard time trying to pivot away from those," Miner said.

Miner said she was campaigning last week in Queens and the No. 1 topic voters wanted to talk about was corruption in Albany.

“I think Andrew Cuomo is a supremely transactional, opportunistic politician. If Cynthia Nixon pushed him to the left, I don’t think that means he is going to stay there," Miner added.