The developer planning a five-story building on Hertel Avenue has modified its design, mostly with adjustments to the ground-floor retail space, the corner appearance and the number of windows.

John Daly, a managing principal and architect at Trautman Associates and principal of O'Dalaigh Real Estate LLC, will ask the Buffalo Planning Board on Monday to approve the modifications to the retail and residential project at 1585 Hertel.

Daly and his wife, Ruthanne, are spending $7 million to convert the vacant former gas station site at Hertel and Parkside avenues into a new residential building with 34 apartments, ranging in size from 500 to 1,055 square feet, plus the ground-level retail and parking. Each upper floor will have six apartments in the front and four in back, with those in the rear benefiting from windows facing Parkside. The first floor will include four apartments.

The new building will still have a footprint of 7,610 square feet on the ground, with retail on the first floor and residential apartments on the upper four floors, as well as two levels of underground parking, with 26 spaces. But Daly now proposes to combine three sets of residential bay windows into one at the northwest corner of the building, while lowering the bottom of the window bays to meet the awning level, "to create a strong presence at the building's primary corner." 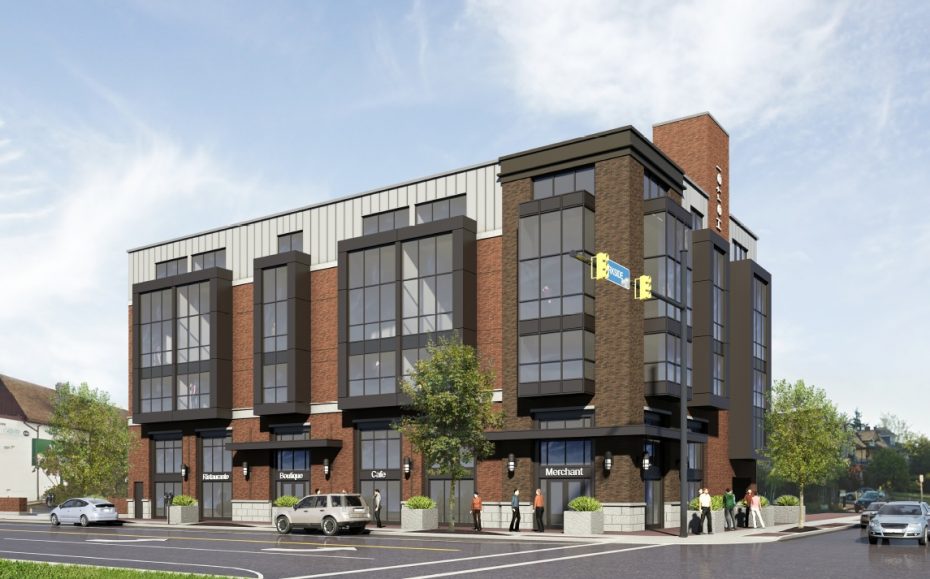 The facade will still feature a mix of red brick, a stone base, and both fiber-cement and metal panels. But the color of the panels has shifted from brown to blue, the massing of the main corner now has what Daly terms a "simplified, cleaner look," and the panels and windows continue around that corner instead of being broken up. More windows have also been added to the ground-floor retail.

The third floor will be 16 feet high, enabling those loft apartments to have a mezzanine level with a second bedroom above the bedroom on the main level below. That effectively counts as another floor as far as city planners are concerned. The plan calls for about $1,000 rent per month for one-bedroom apartments and $1,400 for two-bedroom units.

The project, approved by the city last November, received a pair of zoning variances and a $500,000 grant from the Better Buffalo Fund. Site work is underway.