My son recently ran up to inform me he saw a "bird" fly through the living room and head upstairs. During the 18 years we've lived in our Buffalo home, we've had three such "birds" fly through it — the black, furry kind.

We found no trace of it upstairs. Hoping it found its own way out, we shut the door to every upstairs room and turned in.

Next thing I knew, I was being violently shaken awake by my husband at 6 a.m. My eyes opened to a bat fluttering over the bed. I'm normally averse to harming any animal — bats included. But as we trapped this one against the window, one thing went through my mind: This bat must die.

This happened in August, also known as bat month. The number of reported bat encounters by Erie County residents spike from 60 to 70 a month to more than 300 in August.

In the past two years, the Erie County Health Department has tallied far higher numbers of reported bat encounters than previous years. Half of the 723 bats encounters reported by local residents last year occurred in August. Heading into the last week of this past August, residents had reported 350 bat encounters during the month.

The bats living in this region are typically born in June and develop through most of July. By August, these juveniles are capable of flight but still make lots of dumb mistakes, said Andrew Lutz, who operates Witzend Wildlife Services, based in the Springville area.

"They get tired, they land on a house, they crawl in, and they get trapped in the living space," he said.

In some cases, bats have even been roosting in a home's attic.

Lutz said I probably didn't find my bat the previous night because I didn't look behind pictures, clocks or curtain folds, tight spaces against the walls.

"I've found them behind teddy bears," he said.

Bats are an asset in nature, killing and eating thousands of flying insects a night. The bat species common in this region, the little brown bat and the big brown bat (which I discovered is not big at all), are typical of most bats. They are active at night and fear people.

Health and wildlife experts say homeowners should not kill bats they find in their homes. There are effective and humane ways to remove bat colonies from a home. And if there's any chance a bat could have come into contact with a person or pet, they should always be captured alive and kept until the Health Department can be reached.

Simple trapping methods for single bats found in the house typically involve waiting for the bat to land on a flat surface, covering it with some type of container, and then sliding a piece of cardboard beneath it. We trapped our bat in an old hamster carrier.

I knew I had to take the bat to the Health Department. I wasn't looking forward to it.

I like bats enough that I once saved one after a car struck a bat, ripped up its wing and left it floundering in The Buffalo News parking lot one summer. The security guard pointed it out to me, flopping around at the lot entrance, waiting to be run over by the next car.

The guard offered me a crumpled paper bag from McDonald's. I nudged the crippled bat into the bag with the back of my Franklin Planner, called the Erie County SPCA and said I was coming over. They promised to take a look at it after I repeatedly reassured them that I hadn't touched the bat.

Of the four bats I've encountered in my life, I've spared three. But I'd done enough stories on rabies to know I couldn't spare the last.

My family was awake and alert when two different bats entered our home in prior years. We followed their progress up the stairs. We closed one in an upstairs bathroom, and another in an upstairs computer room. In each case, one of us kept an eye on the bat while the other opened a window. Then we hurried out of the room, turned out the lights and shut the door.

The bats flew out. Problem solved.

But waking up to a bat that had been romping through our bedroom all night while we slept was a different story. We couldn't be sure it hadn't bitten us while we slept because bat teeth are so small. If we'd let it go, health officials would likely have recommended our family undergo a rabies vaccination series to be on the safe side, and those shots are no picnic.

Roughly 260 county residents this year have received rabies vaccine, which requires shots over multiple days, primarily as a precaution due to potential rabies exposure from bats.

Bats are the No. 1 carrier of rabies of all animals tested each year by the Erie County Health Department. It used to be raccoons, but newer and more effective rabies vaccine baiting appears to have dramatically reduced the rabid raccoon population, said Peter Tripi, the administrator who oversees the county's rabies control program.

The actual percentage of local bats that test positive for rabies ranges from 2 percent to 4 percent a year, according to the Health Department data. Of the 723 bat encounters reported last year, 484 bats were tested, and 12 were found to have rabies. This year, 13 bats have tested positive so far.

But while the chances that a bat in your house is rabid may be low, if the bat is rabid and transmitted the virus through its saliva to you, your family or your pets, there is only one outcome — death.

Rabies is 100 percent fatal. And before you die, your brain swells and you go stark raving mad.

For that reason, the county Health Department asks that anyone who finds a bat in their home contact them at 961-6800 during the day or 961-7898 after hours so that they can determine whether the bat should be brought in for testing.

If you don't know when a bat entered your house or how long it's been there, Tripi said, it's better to be safe than sorry.

He recounted one incident from this year in which a couple woke up in bed to find a bat lying between them.

"They literally woke up, and there was a bat laying there on the pillow," he said.

Before taking my brown bat to the health lab, I dropped an old rag in the carrier to make it more comfortable and received assurances from Tripi that it would be euthanized humanely before being shipped out for testing.

Tripi had suggested the bat could have come in through a window with an air conditioner in it. Those window units usually leave a gap big enough for bats to crawl through. Then I read there was the possibility of bats roosting in attics or walls, and the one we saw might be one of the younger bats that got lost inside and emerged in a basement or lower floor. 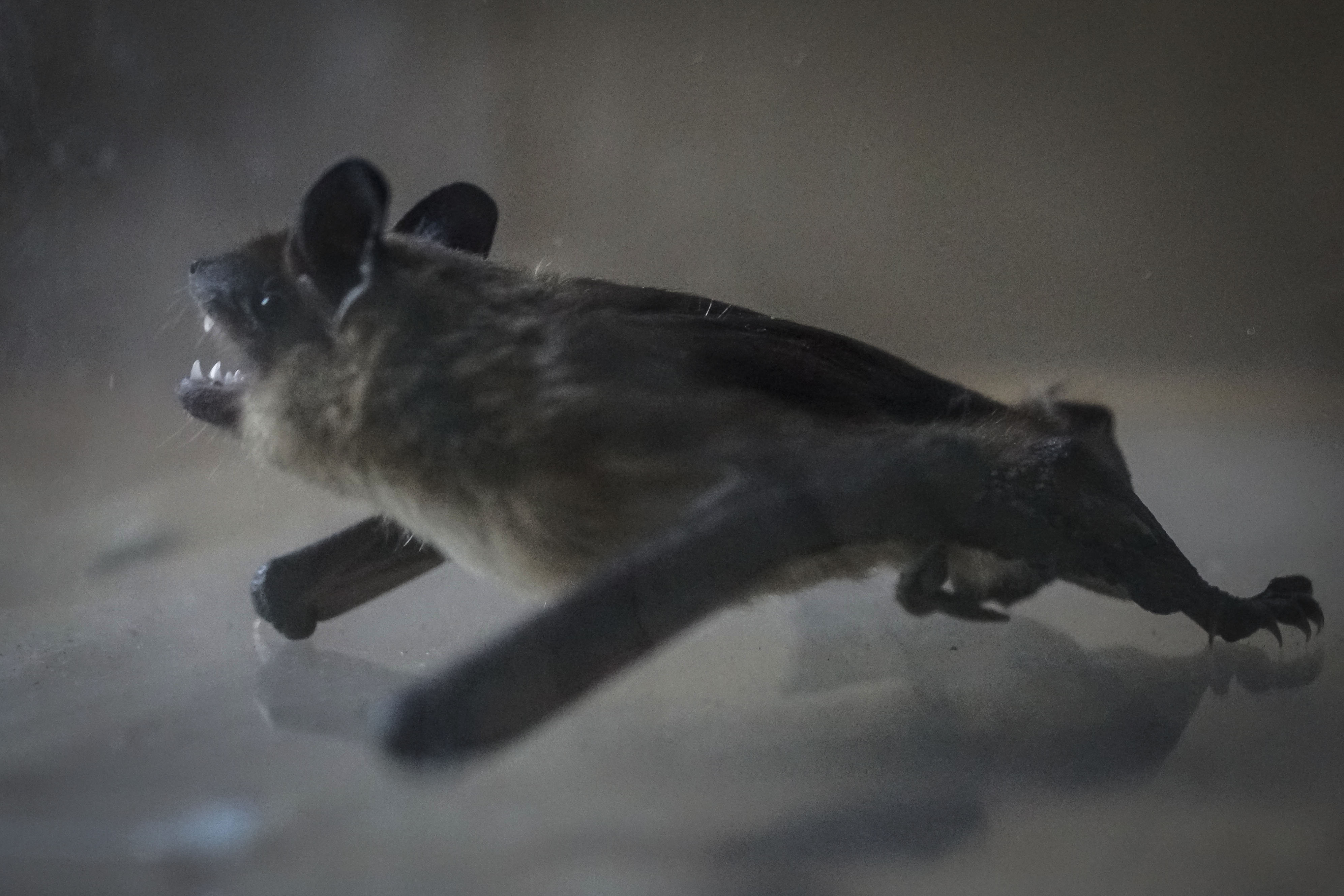 A profile of the bat captured in Sandra Tan's bedroom. It may look fierce here, but it was really small and terrified. (Derek Gee/Buffalo News)

Hence a call to Lutz. He said most of the homes he's inspected don't have roosting bat colonies, but some do. They're usually found in the attic or in soffits and under eaves, infiltrating small openings. In one house recently purchased in the Lockport area, the owners were horrified to learn that they had roughly 500 bats living in the walls.

"They had to demolish every wall in their house to clean up the bat droppings," he said.

Homeowners who suspect a bat colony should call wildlife control experts who can install one-way bat valves to keep bats that leave their roost from re-entering the house. They can also work to seal up other areas where bats could enter living spaces.

And finally, all dogs and cats should be vaccinated against rabies, even if they're considered indoor pets.

"We have indoor cats that are going into quarantine today because they came into contact with a bat," he said. "And they’re in quarantine for six months."

Owners should bring a record of the pet’s most recent rabies vaccination, if available. Pets should be non-aggressive to other animals, under the owner's control, and on a tight leash or in a secure carrier.

Our pets are vaccinated. So next on the list — sending my husband up into the attic with a flashlight.