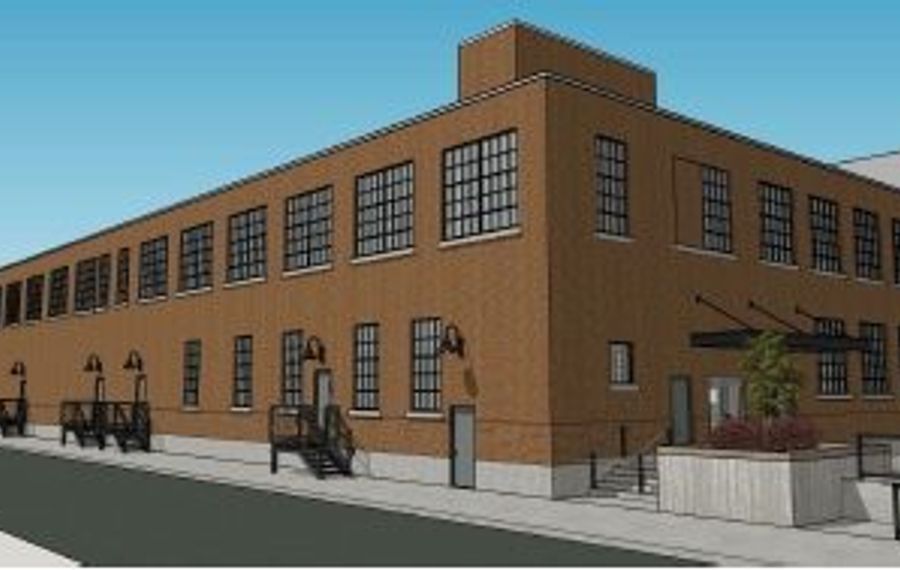 A premature demolition of part of the former Schoellkopf Aniline & Chemical Co. property on Elk Street disqualified a proposed redevelopment project from receiving historic tax credits, leading the developer to change plans and take down more of the building instead of reusing it.

Jon Williams and his Ontario Specialty Contracting are now seeking city permission to demolish the remaining portion of the historic complex's former Ice House building at 229 Elk. That's part of his conversion of that 21.7-acre property into a new mixed-use complex with office, residential and industrial space, which will include OSC's new corporate headquarters. The proposal is scheduled to be heard by the Preservation Board when it meets at 3 p.m. Thursday, on the ninth floor of City Hall.

Williams already demolished part of the Ice House structure last year because of concerns about its stability, but intended to renovate the two vacant and deteriorating buildings that are still standing in a $4.2 million project by his South Buffalo Redevelopment. Besides the Ice House building, the site at the corner of Elk and Lee streets also includes the 26,142-square-foot Power House building and a two-story Connector Building from the 1940s or 1950s.

"The Ice House was structurally beyond redemption, so it was taken down," said Phil Pantano, a spokesman for Williams and South Buffalo Redevelopment. "The columns were gone. It was a public safety hazard."

Under the original project, The Connector Building was slated for conversion into 10,000 square feet of office space and two apartments on the second floor, with flex or retail space taking up the first floor. OSC would occupy the office space, relocating from its current home at 333 Ganson St., where it shares space with RiverWorks.

Meanwhile, the Power House building – which is four stories in height but a single open floor – was to become assembly or event space, capitalizing on its size, design and arched windows. Another part of the larger property is now also slated to become a sports complex.

The site is also known as the Buffalo Color site for its prior use by one of the nation's largest dye makers, and the project relied heavily on state and federal historic tax credits, which would cover up to 40 percent of the redevelopment costs. But the National Park Service in May rejected Williams' application for the tax credits, citing the initial demolition of the northwestern bays of the Power House and half of the Ice House.

In a May 15 letter to Williams, a Park Service official called the Ice House freezing tank area "a large, character-defining portion of the complex and a critical component of the historic use of the site." So its demolition "markedly diminishes the historic appearance and character of the property," according to the letter.

"It was a perfect storm," Pantano said. "You can't redo more than 50 percent of the structure and still have it designated as historic. So what would have been done for the Ice House would have disqualified it anyway."

The Park Service official also criticized Williams for not even considering alternatives to an expensive total restoration or total demolition, and suggested that if he had waited on the demolition, the Park Service "may have been able to recommend modifications that would have enabled the project to meet the standards" to qualify for the credits. "That opportunity is foreclosed because the work that does not meet the standards is complete," she wrote.

Without those valuable credits, OSC wrote in an Aug. 27 letter to the Preservation Board, "the work cannot be done cost effectively, as the building is in need of numerous and costly structural repairs." So now the firm wants to take down the Connector Building as well, and concentrate on the Power House.

"We'll focus our attention on the Power House structure and saving that," Pantano said. "We want to prevent that from having the same fate as the Ice House. Jon has been committed to trying to save the facilities and repurpose them."

Pantano said OSC will still move its offices to the site, but now in the Power House building. He added that the "optimal use" for the building would likely involve adding another floor to the interior of the building, to "create multiple spaces for multiple tenants." Those plans and final costs are still being finalized.

"There have been discussions with prospective users of the facility, but nothing final yet," Pantano said. "Removing the connector piece really opens up the Power House in terms of access and visibility and total redevelopment of that building."