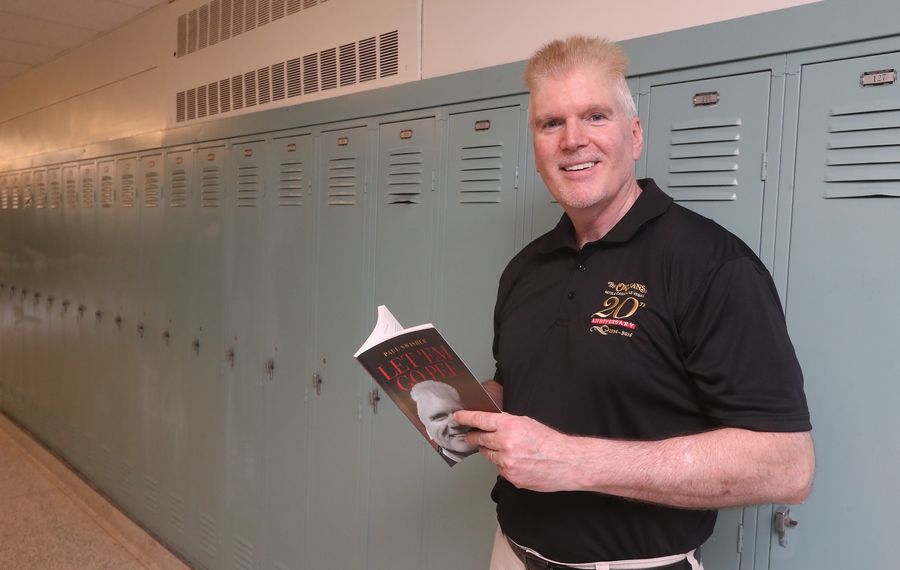 The musician, songwriter and co-inventor of KanJam majored in psychology and had plans of working as a college professor.

But after 30 years of teaching hundreds of students at North Tonawanda High School, Swisher wants to return to a classroom – of teachers.

“There are teachers who definitely should not be teaching because they don’t have the communications skills required," he said. “The biggest problem is not following through with what you say you will do. You’ll get a reputation as a blowhard. If you get into that situation, you can have an entire career of torment. You come to work every day and you are being abused.”

At 58, Swisher retired two years ago, but he is still building a resume. He hopes his recently published book will be used as a vehicle for teacher-training programs.

“Let ‘Em Go Pee: Practical Advice for Those Who Dare to Teach” may have an unconventional title, but it reflects an experience Swisher had as a kindergartener when a teacher asked him to “hold on a for minute” after he asked to use the restroom. The results were both expected and unpleasant for all.

“It’s an over-the-top example of how a simple common courtesy should be extended to anyone out of respect,” Swisher said. “Communication and understanding on such a basic level as bodily functions must be applied daily if a teacher hopes to manage groups of students.

Swisher was the youngest of four children in a working-class family in North Tonawanda. He excelled in school and was selected for the district’s Major Progress Program, an accelerated academic curriculum for the fifth and sixth grades. It’s where he wrote his first book as a 10-year-old.

In high school he was a baseball and golf athlete. As a graduate of SUNY Buffalo State in the early 1980s, Swisher took advantage of a state teacher recruitment program to earn his teaching certification and a master’s degree in teaching. He became a full-time science teacher in 1985 and married his high school sweetheart in '93.

“It started like a garbage-can disc game that everyone was playing. None of us had any money at the time,” Swisher recalled. “We were always talking about getting rich and all the schemes that we had. I started organizing tournaments, and people were traveling from out of state to play.”

KanJam was patented in 1995. Five years later, Swisher introduced the interactive game to high school students as a physical education activity. In 2006 he sold his share in KanJam for royalties. Success of the game allowed him to retire at an earlier age, he said.

Swisher was a driving force with a knack of “pulling things together,” said Gary Lachut, former chairman of the high school science department who retired the same year as Swisher.

“I remember him bringing garbage cans into the classroom and talking about the game,” said Lachut. “He could take things to another level. He would connect with the kids. He grabbed their attention to a point where they didn’t even know they’re learning.”

When Swisher retired he passed his room keys to former student Rob Brocklehurst, who just started his fourth school year teaching science at the high school.

“It brought back the memory of being a student in his class,” said Brocklehurst, 28. “There was never any downtime when Swish phoned it in. He had very few if any confrontational situations because he promoted a learning environment. I saw what the art of being a teacher entailed.”

Swisher can’t turn his brain off at night, which may play a role in his 4:15 a.m. wake-up time. He wrote the book in his first year of retirement and is halfway finished with his second book on school safety. He plans to call it: “Let 'em Live & Learn.”

“Kids want discipline. They want to know that the person standing in front of them is in charge and is going to be a caretaker for them,” Swisher said. “You have to be reasonable and fair, and you must go through a constant self-assessment. Take detailed notes. Reach out and engage parents.”

Swisher’s command of teaching is best understood through his description of the following experiences with students that occurred through the years at North Tonawanda. The topics are recurring concerns in high school.

Profanity: Joe was a nice kid with a propensity for profanity. After reminding him why this was not acceptable in school, he improved but soon reverted to his spicy arsenal. After meeting with his parents and written reprimands, the profanity continued.

One morning before school, we met in a classroom to watch a scene from “A Christmas Story,” in which Darren McGavin (Ralphie’s father) swore a blue streak, but the words used – pickereen, ultramoron, sassy jabber – sounded funny.

I encouraged Joe to be creative and use his own cache of substitute swear words. He was amused, and I sensed he appreciated the effort to help him stay out of trouble. He left our meeting with a promise to curb his profanity. Although he never developed his own slang terms, his profanity all but stopped.

Hygiene: Richard was a feisty European student who moved here in the early 2000s. He had grown up in a culture where people rarely used deodorant. Students could be brutally honest (and cruel) vocalizing their displeasure at body odor. This can lead to bullying and, in some cases, physical assault.

Richard was initially resistant to change and found the teasing and taunting of his classmates both irritating and anger-provoking. I asked the nurse to meet Richard after my class to discuss the issue privately with him in her office, and she seemed satisfied that he would address the problem.

While hiking in Watkins Glen on a field trip (and before Richard heeded the nurse's advice) we heard a sing-song voice saying “somebody’s stinky” over and over. As the lead hiker, I prepared myself to address the taunting. Before I could, Richard stepped aside to allow his taunter to pass. As he did, Richard leveled him with a WWF-like head slap! The abuser was stunned and now begged for justice as he lay sprawled out on the trail. I recognized the taunter as an incredibly obnoxious student enrolled in a colleague’s class. We picked him up, dusted him off and made sure he understood that he had precipitated the slap with his verbal abuse. We also made a fair attempt to chastise Richard for the physical response.