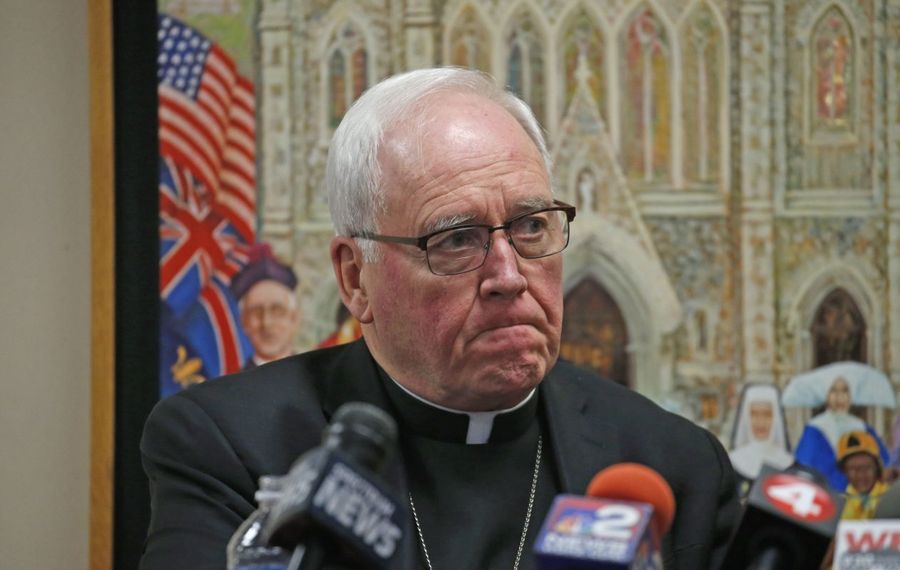 The Buffalo Diocese has tightened security inside its Main Street headquarters, as officials try to unravel how a television reporter obtained secret clergy files.

In the aftermath of a leak of internal emails, memos and letters showing how Bishop Richard J. Malone handled sexual misconduct and inappropriate behavior allegations against two priests, the diocese posted security guards at the doors to the headquarters, changed locks, set up a video camera and brought in a computer expert to install encryption software on email accounts and examine information systems for weaknesses that would enable security breaches, according to multiple sources connected to the diocese. Even priests who enter the building are required to wear an identification badge.

Multiple sources have told The News that the documents used in three separate WKBW-TV reports since Aug. 22 included information that normally would be seen only by Malone and his innermost circle of confidants.

Diocesan officials were focused on determining who leaked the information, according to multiple sources. The sources also said the diocese still isn’t certain whether more documents were leaked.

Malone told clergy at an annual picnic outing earlier this week that at least some of the files were located in a special locked room in the chancery which fewer than a half-dozen people can enter, according to sources, including one who attended the picnic. The files were not missing from the locked room. They may have been secretly photographed, perhaps with a smartphone, according to sources.

The diocese has since put a video camera in the room that activates upon entry, sources said.

Diocesan spokesman George Richert declined to comment on the new security measures and efforts to track down the source of the leaked documents.

The leak followed six months of media scrutiny of the diocese’s handling of clergy sexual abuse. The scandal erupted after retired Rev. Norbert Orsolits admitted to The Buffalo News that he had molested "probably dozens" of boys. The documents obtained by WKBW-TV helped show how Malone had allowed two priests accused of inappropriate conduct to remain in ministry, even as the bishop maintained publicly that he was not covering up for abusive priests.

Since the documents surfaced, Paul A. Snyder III, a prominent businessman and church deacon, along with the Catholic radio station WLOF and Catholic Democrats such as Rep. Brian Higgins, Lt. Gov. Kathy Hochul and Erie County Legislator Patrick Burke have called for Malone to resign.

The diocese through its lawyers tried to stop WKBW-TV from broadcasting the stories.

The day before the station aired its first report, a diocesan lawyer suggested that Charlie Specht, the reporter who obtained the leaked documents, was “hacking emails” to get confidential information that is protected by attorney-client privilege, according to a telephone conversation recorded by Specht.

Specht assured the lawyer, Lawlor Quinlan, that the information he received was obtained legally.

“If they were provided by someone, as you say, legally, that person was not authorized to do it and that’s a huge problem,” Quinlan said in the taped telephone conversation.

Quinlan followed up with an email, again stating that any communications between his law firm and the diocese were protected by attorney-client privilege.

“The emails,” wrote Quinlan, “could not have been lawfully obtained because they are privileged, and I have confirmed with our client that the privilege was never waived.”

Quinlan also asked Specht to destroy the email information he had received.