AJ McCarron led the Buffalo Bills to an incredible fourth-quarter comeback victory, rallying for 25 unanswered points in the final quarter. McCarron’s poise, toughness, and never-give-up mentality ignited the Bills' fantastic finish in a 28-27 victory against the Chicago Bears in the preseason finale.

The players on the field Thursday night were fighting for their football lives. Many of them undrafted free agents with the dream of making the roster, and every play, every opportunity is another chance of making that childhood dream come true. Rosters are almost always set going into training camp with only a couple “actual” spots up for grabs. That sense of urgency can bring out the best in people, the way it did for McCarron and the Bills.

The first quarter was solid for McCarron as he had good operational tempo. The Buffalo offense was consistently out of the huddle on time. Players knew where to get lined up and did so with precision. McCarron was 5 of 8 in the quarter with one critical mistake, an interception returned for a touchdown.

This particular play was interesting to review as the Bills were in an empty set and a five-man pass protection. Five-man protections can be challenging as quarterbacks can be “hot” off of both sides of the formation. The Bears' five-man pressure technically and theoretically should have been picked up as Buffalo had five blockers for five rushers.

In the review, the blitzing linebacker off of the left side of McCarron is lined up over the most inside receiver. When he blitzes, no one is covering the wide receiver. It is difficult to say if McCarron was supposed to throw into this area, but certainly quarterbacks are always looking to attack the voided spaces where defensive pressures originate. In a general sense it is possible that this defense was “busted” as the typical signs of blitz to McCarron’s left were not there. Almost always, linebackers will blitz when they have a safety “stacked” behind them.

This stacked player will then play man on the offensive receiver from the location the linebacker blitzed. Chicago was not lined up with a stacked player, which made the blitz unsound and the receiver open. This could have been a huge play for the Bills if McCarron saw the left side blitzing linebacker and the corresponding voided area. The slant route was wide open. Unfortunately for McCarron, his eyes were on the right side where the corner jumped the “hitch” route, which resulted in the interception and defensive score.

It is clear to see why the Bills sought out and signed AJ McCarron. In spite of seemingly insurmountable odds, he exudes poise and leadership and is a very tough player when the pressure peaks. Following the pick six, it would have been easy to go into an emotional funk, but he didn’t. The Bills just kept chipping away, and when bad things happened, they went right back to work trying to find other ways to be productive. This demonstrates that Sean McDermott is making great strides in the locker room with the player leadership on this team.

He has a group of players who are going to play with passion and belief in the system, no matter what the score. 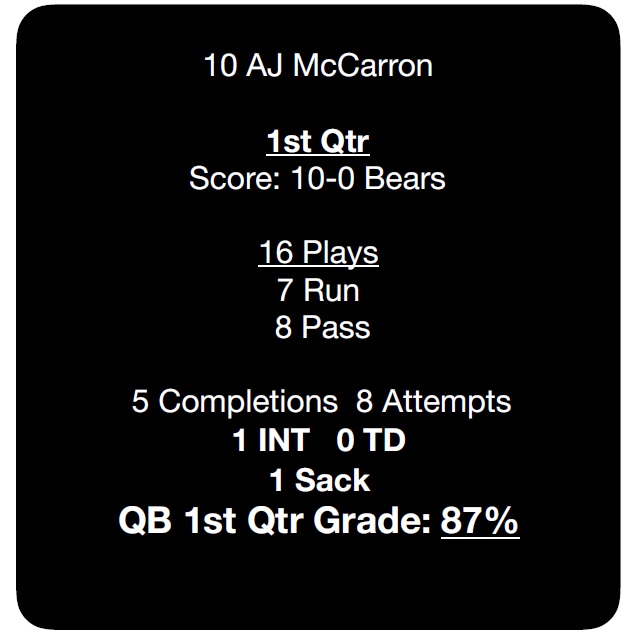 The Bills only ran eight offensive plays. McCarron was 1 of 5 passing, with one interception and four minuses in the grading system. He was intercepted for the second time as his attempted pass was deflected at the line of scrimmage. The tipped ball shot up into the air helplessly and fell into the hands of the defense.

This type of play is simply unfortunate for McCarron and the Bills as he was flushed out of the pocket to his right avoiding pressure. This turnover wasn’t due to any mistake by the quarterback, simply an excellent play by the defensive lineman getting his hand on the football.

This was a quarter in which Chicago dominated the offensive action with long sustained drives. McCarron’s second turnover enabled the Bears to jump into a 20-0 commanding lead at the half.

The Bears missed a golden opportunity to add more points seconds before halftime as their 39-yard field goal attempt hit the upright. It turns out missing this chip shot field goal was the difference in the game. 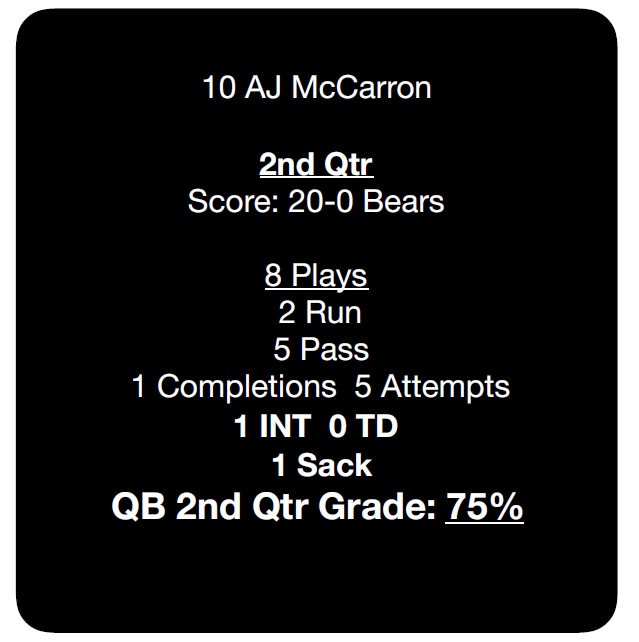 Offensive coordinator Brian Daboll stayed aggressive. The Bills were down, falling behind 27-3 with 6:06 left in the third quarter. McCarron was 0 for 6 at one point when all hope seemed to be lost.

Part of this was due to his willingness to throw the ball away. McCarron selflessly did so three times under extreme duress keeping the Bills in manageable situations and preserving field position. The Bills also ran the ball more effectively in the quarter as McCarron “killed” several plays, changing them at the line of scrimmage to runs. This demonstrated great command by McCarron as he confidently and seamlessly was able to get the team into positive situations at the line of scrimmage.

Although the Bills were unable to score in the third quarter McCarron executed at a high level, which set Buffalo up for the comeback. 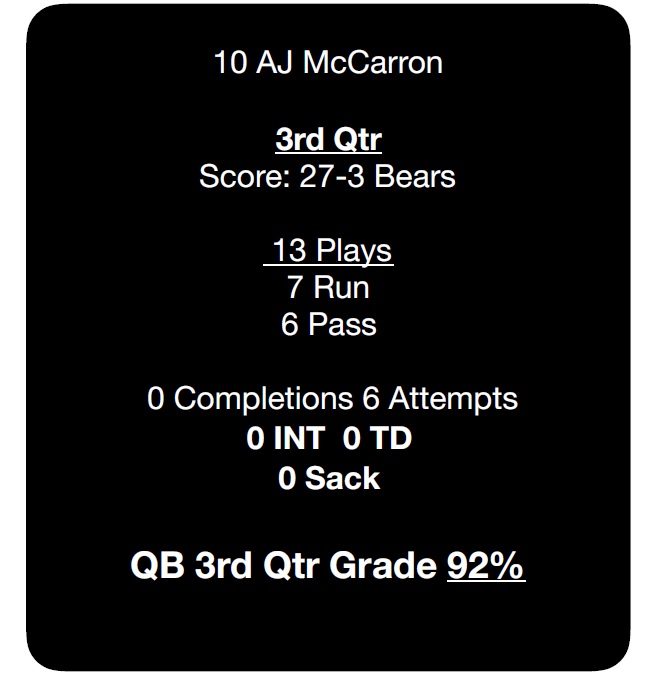 The Bears’ defense is built for pressure. They used a 3-4 scheme, that created confusion for the Bills at the line of scrimmage. The three man defensive front in its purest form puts one defensive lineman on the center and two defensive ends on the tackles. Both offensive guards are uncovered, which in the football world is known as an “odd” front. This can create confusion for offensive tackles and guards when outside linebackers blitz from this alignment.

The Bears did this frequently, in particular in third down situations. The defensive weakness that McCarron exposed was the man-to-man defense behind the blitzers did not account for McCarron’s demoralizing scrambles.

McCarron rushed for 54 yards in the game, more than he has rushed for in his entire NFL career, which is an enormous accomplishment considering the fact that he is not “fast” in football terms. McCarron scrambled for a touchdown to start the Bills’ 25-point quarter as he shuffled and stepped up in the pocket against man-to-man coverage. He charged ahead into the opening and across the goal line. This was great awareness and movement by McCarron.

The Buffalo quarterback made four other important plays with his legs in the final quarter, scrambling for first downs and keeping drives alive. If Daboll coached this during the week, it was genius as no one on the Bears defense accounted for the quarterback.

In all likelihood, McCarron’s movement and scrambles were unplanned reactions to the man-to-man situations, which lacked quarterback accountability. These surprising scampers were absolutely the difference in the football game.

Another surprising and impressive characteristic of the Buffalo offense was the number of deep throws that McCarron made, stretching the Bears defense vertically. Six deep shots in 29 fourth-quarter plays is unusually high and resulted in the Bills' second score of the quarter, a perfectly thrown “go” route down the right side.  The other value of deep passing attempts is that oftentimes penalties occur on plays down the field. In this case, McCarron was the recipient of two important “roughing the passer” penalties as the Bears defenders had free runs at the quarterback, getting their hands up and into his helmet. This is extraordinarily difficult for any quarterback, standing in the pocket and delivering the football knowing you are about to get nailed.

Very high marks for the Jim Kelly-like courage and leadership that McCarron displayed. He proved his willingness to take the physical abuse for the team as well as his resilience in getting up each and every time. Incredible determination and toughness.

McCarron actually graded higher than 100% in the fourth quarter because of the extraordinary plays beyond his job description that he made. It is safe to say that McCarron is a great finisher. He has, as a college and professional player, risen to meet challenges time and again, executing at his highest levels in the most critical situations. 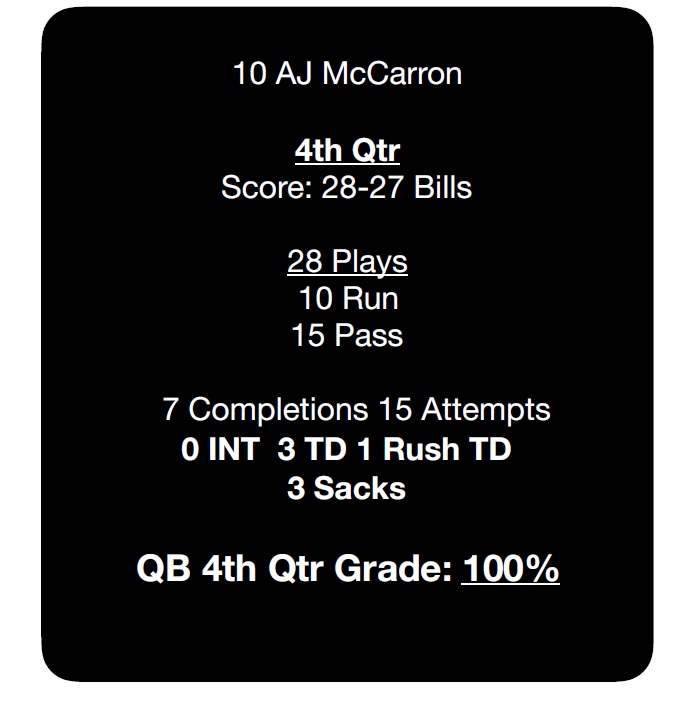 At this point it is safe to safe that McCarron and Nathan Peterman have demonstrated their ability to lead the Bills, and either would be a good choice. There are two right answers here, McCarron’s experience or Peterman’s efficiency.

This puts the Bills in the comfortable position of not having to play Josh Allen immediately. This keeps Allen on the sideline marinating in Daboll’s system. This is a better place for Allen at this point, keeping the young first-round pick learning and developing without being thrown into the fire in Baltimore.

If McCarron or Peterman fall short in the first four weeks, the extra month of preparation for Allen will be invaluable as Allen will undoubtedly take over.